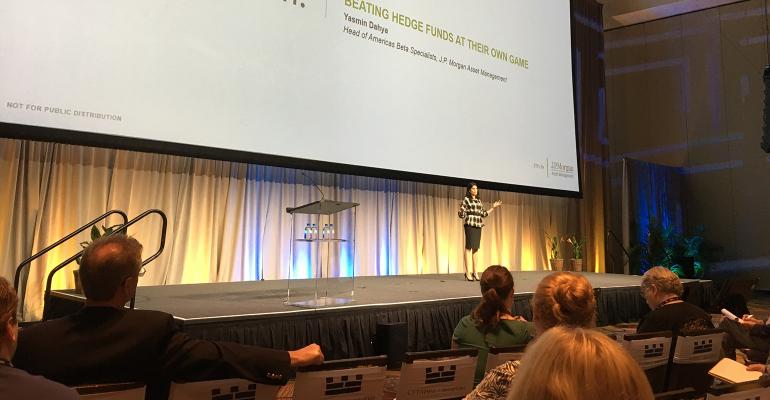 Liquid alternatives and hedge fund replication have always loomed as a massive white space for the ETF industry. But J.P. Morgan Asset Management is trying to democratize the category through its line of alternative beta ETFs. The firm has launched the latest in the series, the JPMorgan Long/Short ETF (JPLS), which uses a rules-based, bottom-up security selection process. It can maintain long and short positions in global equities either directly or through the use of derivatives. An expense ratio was not listed in the SEC filing. The event-driven ETF charges a gross 1.12 percent fee. Speaking at the recent Inside ETFs conference, Yasmin Dahya, head of the Americas Beta Specialist team, said you can access the systematic returns of hedge funds in an ETF. That’s what J.P. Morgan hopes to do.

Top Concern of Wealthy Clients? Others Knowing About It Members of wealthy families are not worried about losing their money, and the majority aren’t worried about raising well-adjusted children. Their top concern (47 percent of respondents) was others knowing that they are wealthy, followed by being targeted by predators or scams (44 percent) and being judged solely by their wealth (42 percent), according to a study recently published by Wilmington Trust. The study concentrated on members of families with a net worth of $20 million, but 72 percent were members of families with upwards of $50 million. The study also digs deeper into why respondents felt the way they did and what services they value most from advisors. The popular trading app Robinhood will let customers buy and trade bitcoin, Ripple, Ethereum and other cryptocurrencies starting in February, Fortune reports. The app, which has three million users with a median age of 26, also made available the ability to track market data for 16 cryptocurrencies, read crypto news and set price alerts. The cryptocurrencies will become available to start trading on the app in waves, starting with bitcoin and Ethereum. The service initially will only be availalbe in California, Massachusetts, Missouri, Montana and New Hampshire, with more states expected to allow cryptocurrency trading in the coming months. Trading will function the same as with equities, allowing customers to acquire stakes without paying a commission or fees. Robionhood Co-CEO Baiju Bhatt said the company will act as a broker/dealer rather than an exchange in the cryptocurrency market, partnering with large institutions to acquire the currencies on behalf of customers.