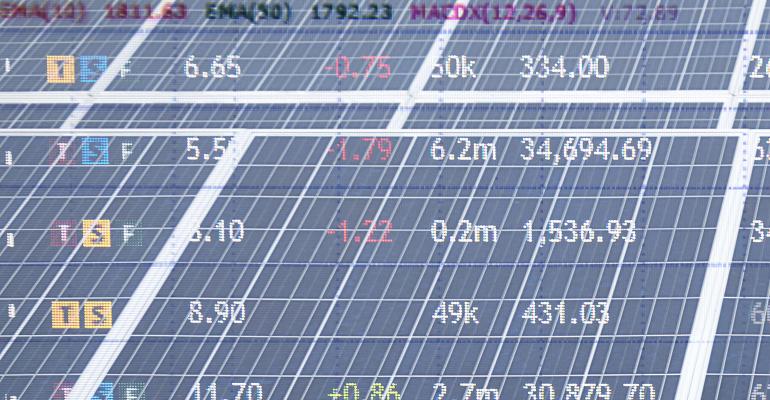 (Bloomberg) -- A one-time standard bearer for the boom in clean-energy funds is bleeding cash as solar stocks are battered by everything from rising rates to possible subsidy reductions — and President Joe Biden’s stalled infrastructure plan.

Invesco Ltd.’s $2.4 billion Solar ETF (ticker TAN) suffered $417 million of outflows in December, the worst month in its nearly 14-year history. The outflows have continued as its share price has dropped almost 30% since October.

While solar stocks have been caught up in the extensive rotation out of the high-growth technology firms as the Federal Reserve prepares to raise interest rates, Todd Rosenbluth, head of ETF and mutual fund research at CFRA, said the sector also took a hit after California last month proposed a subsidy cut for homeowners’ systems.

“It looks like it’s going to be beneficial to state utilities, but make solar ownership less attractive for new buyers,” he said.

The plan is still facing a fair amount of scrutiny as critics argue it would add new fees for solar users and discourage installations. California Governor Gavin Newsom said Monday that changes need to be made before the proposal in finalized.

But that isn’t the solar industry’s only worry. Rosenbluth said delays to President Biden’s Build Back Better plan likely means that some clean-energy subsidies will become causalities of the negotiations as the bill gets “watered down.”

Solar companies could suffer because they rely heavily on leverage to finance their activities, according to Bajaj. Rising rates could eat into the value of their long-term cash flows, making projects like solar farms worth less.

“Investors are cutting their losses and unwinding positions,” he said.

Other funds that focus on renewable energy -- like the iShares Global Clean Energy ETF (ICLN) and the ALPS Clean Energy ETF (ACES) -- have also tumbled since October, though not as much as Invesco’s ETF. And their expense ratios -- 0.42% and 0.55%, respectively -- are cheaper than TAN’s.

Solar funds aren’t just in competition with one another, they also have to fight other alternative energy sources for investors. Despite environmentalists’ concerns, nuclear power is getting a fresh look from governments trying to achieve net-zero greenhouse gas emissions. So funds like Global X Uranium ETF (URA) are “catching hold,” said Bloomberg Intelligence analyst Eric Balchunas.

“Solar has always been thought of as a solution for climate change,” he said. “Uranium is new to the picture, and people are looking at nuclear energy as a major part of the solution.”

--With assistance from Emily Graffeo.

To contact the author of this story:
Peyton Forte in New York at [email protected]