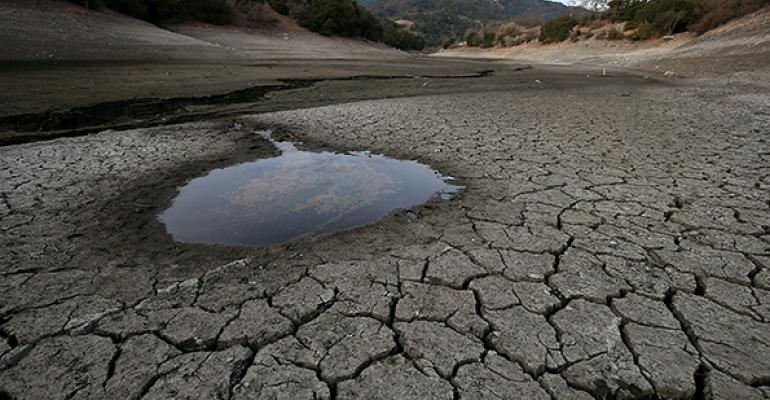 Options are as vast as the ocean, but not all are smart buys

Water scarcity is making headlines, particularly as a drought savages California, and heightened tensions about water supply and use won’t evaporate any time soon.

Whether it is concern about climate change, global population growth or the need to revamp aging water infrastructure, investment advisers say the water sector offers long-term buying opportunities. However, they add, carefully review the type of investment since offerings are as vast as the ocean.

It has become easier to add water investments to a portfolio. Some water utilities are publically traded, as are a few agricultural producers, and a handful of exchange-traded funds have bubbled up to make it simpler to get broad sector exposure. Farmland remains another way to get water ownership.

“I think they’re good managers of water… You might not get such a big bang for your buck, but (they’ve been) a good, steady investment for a number of years,” he said, adding that water demand may rise in the future, and water utilities should be able to pass on some price increases.

Yet not everyone sees utilities as slam-dunk investments. Shawn Hackett, president, Hackett Financial Advisors, is wary. Water conservation is on many people’s minds, the California drought notwithstanding, and lower water use may hurt utilities’ revenues. With less money coming in, it may make it more difficult to invest in infrastructure, he added.

That’s a real issue for utilities dependent on volume-based sales, said Sharlene Leurig, senior manager, water program at Ceres, a nonprofit organization advocating for sustainability leadership. She wrote a white paper in December 2012 on the expanding risks for U.S. water providers called “Water Ripples.” Leurig added, though, that water prices are likely to rise in the future.

The aging U.S. water infrastructure is another issue of investor interest, as municipalities need to replace broken mains and do other improvements to maintain water supplies to citizens. Croft said Xylem (XLY) is a leading provider of water infrastructure and is one of the purest plays out there. “They are trading at a little premium to the market, but not anything crazy,” he said.

Hackett said another company heavily in the infrastructure space is Mueller Water Products (MWA), which trades a little cheaper than Xylem.

Croft said risks to water infrastructure construction are municipal budgets and how much they commit to spending. Yet he said for Xylem, one-third of their business is for residential and commercial users. With the return of the housing sector, Xylem should also benefit from that, he added.

Hackett and some other advisers said investors should also look to agriculture for direct or indirect water exposure as farming is the biggest freshwater user.

Two publically traded California agricultural producers, Limoneira (LMNR), the largest U.S. lemon grower, and JG Boswell (BWEL), a cotton and tomato producer also have water rights, he said. These profitable agricultural operations may eventually have the opportunity to make those water rights a commodity, too.

He pointed to a deal last year between Cadiz (CDZI) and a public water utility in Orange County, Calif., to deliver water from the Mojave Desert aquifer to Los Angeles. While the deal remains controversial, Hackett said this may be a sign of things to come.

Hackett and Croft said while they like irrigation companies like Lindsay (LNN) and Valmont (VMI), they also said the companies’ popularity with investors have pushed valuations high, making them no bargain at the time.

Ned Schmidt, chartered financial analyst, and editor of the Agri-Food Value View newsletter, said investors with long-term views should stick with owning farmland, whether it is orchards, cropland or pasture. He said he prefers farmland with natural access to water, rather than land which is dependent on irrigation, in part because of the added equipment and irrigation costs.

He said orchards and pasture tend to get overlooked by investors. “We tend to think in terms of grains, but exports of fruits and nuts to Asia are an extremely profitable businesses. Again, exporting cherries and nuts are the equivalent of exporting virtual water and land,” Schmidt said.

He said pastures are cheaper than land for grain production, but the rents landowners get are lower. However, “pasture land also might benefit from sustainable management efforts,” he said.

David Twibell, president of Custom Portfolio Group, said water investing is a good long-term play, but it can be difficult to choose individual companies. The space is slowly developing as the demographic and environment trends that support water will play out over decades. As such he prefers ETFs over individual companies.

There are only a few water ETFs, and the primary ETF that he uses is the Powershares Water Resource Portfolio ETF (PHO). “It’s not limited to one of these water subsectors; it’s got some of everything in there,” he said.

Really dive into the ETFs holdings before buying, he said, because one ETF could be vastly different from another because of the different subsectors the industry covers. Some have also had strong runs recently, and may be fully valued.

Although water is a resource, he said it doesn’t act like other resource companies as far as portfolio diversification goes, so don’t necessarily expect it to act like a commodity stock.

“Water is not some place people go when there’s a big commodity boom or inflation. It’s not on people’s radar screen…. I look at it like tech, it moves part and parcel with the rest of the market,” he said.