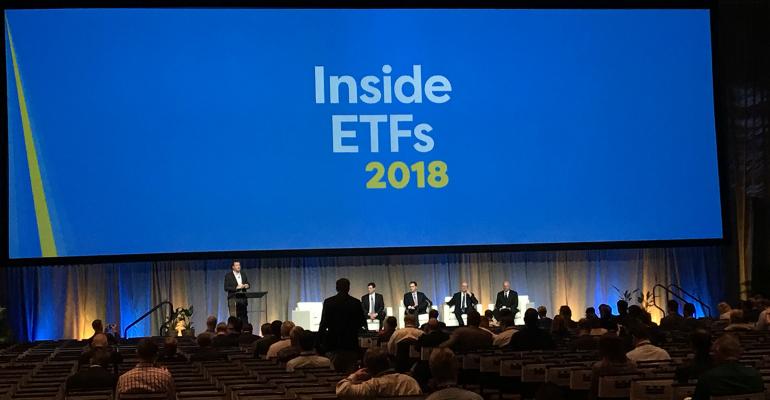 A panel of investors speaking at the Inside ETFs conference said global growth would continue to fuel equity markets around the world. Bondholders, on the other hand, are facing “a nightmare.”

A panel of investment experts at the Inside ETFs conference in Hollywood, Fla. Monday painted a bullish picture of the global economy, stocks and commodities for this year, but views are mixed on bonds.

“Synchronized economic growth will continually globally,” said Lori Heinel, deputy global chief investment officer at State Street Global Advisors. “That’s a backdrop for risk assets like equities to do well.” U.S. stocks will benefit from tax reform too, she said. “All this sets up 2018 as good for U.S. equity investors.”

She doesn’t expect interest rates to soar this year. “There’s an enormous amount of money waiting for yields to rise,” Heinel said. Presumably investors will use that dry powder to buy fixed-income securities as rates climb. “We wouldn’t overweight bonds, but we wouldn’t abandon them,” she said.

Heinel and her colleagues find high-yield debt attractive and would trade up in quality there. They are looking at floating-rate bank loans and emerging-market debt too. “Credit conditions are improving in many emerging-market economies, and you get diversity outside of the dollar,” she said.

Related: The Next Markets for ETF Disruption? Hedge Funds, Private Equity and SMAs

Richard Bernstein, CEO of Bernstein Advisors, wasn’t so sanguine on fixed income. “If you’re a bondholder this is a nightmare,” he said, explaining that the harmonized global economic growth isn’t unusual. Historically, the U.S. leads economic recoveries, and the rest of the world follows. “That’s what’s happening now,” he noted.

Investors holding on to bonds now are “arguing that the business cycle is dead,” Bernstein said.  But it’s not, he maintains. Interest rates go up late in a cycle, which they are doing now. “Bond investors are ostriches,” he said. They say there is no inflation, even though inflation expectations are going up.

“The average investor’s asset allocation is grossly inadequate in this environment,” Bernstein said. “There’s tremendous overexposure to bonds and other fixed-income investments.”

It may be a bit early to call a definitive end to the 35-year bull market for bonds, he said. But to ignore the rise in rates is foolish, Bernstein maintains. “You can play with the weight of your portfolio, and also with the duration of your bonds. We’re 20 percent to 30 percent in bonds, but only 30 percent in duration.”

Dennis Gartman, publisher of The Gartman Letter, thinks the bond bull market did end definitively—in the summer of 2016. Interest rates will likely rise moderately in the next 10 years, but then soar within the next 25-30 years, he predicted.

Rising yields will be accompanied by soaring commodity prices in the near term, Gartman said. “You’ll be surprised how strong commodities are in the next two to three years.” Stronger-than-expected Chinese economic growth, perhaps above 7 percent, will help fuel the rally, he said.

Commodities reached their lows within a month or two of bond yields touching their lows in 2016, he said. “The only commodity I’m mildly bearish on is energy, because of fracking.”

David Bianco, chief investment strategist at Deutsche Asset Management, is “particularly excited” about emerging market stocks. He thinks the U.S. business cycle will remain muted, but he doesn’t expect a recession for another two years.

He’s not enthusiastic about high-yield bonds. If he’s right about the economy, equities will do better than high-yield, and if he’s wrong, they’ll go down about the same amount, he said. Meanwhile, on the issue of block chain, Bianco bucked the conventional wisdom, saying the new technology is too costly, with high energy consumption and high redundancy.

Kurt Reiman, chief investment strategist, Canada, for BlackRock, doesn’t see the U.S stock market as irrationally exuberant now. But given the strong gains, it makes sense to focus outside the U.S., “where there is still room to run,” he said.

As for what could upset the global apple cart, several of the experts cited the possibility of a trade war. “The biggest problem is the administration’s opposition to free trade,” Gartman said. A trade war risks higher interest rates and inflation, Bianco said. “Trade is the foundation of prosperity.”

Meanwhile Heinel sees inflation as the biggest risk, with a possibility of higher import prices, wages and commodity prices. “That hurts bonds and stocks,” she said. “But our core call is that we won’t see much inflation.”