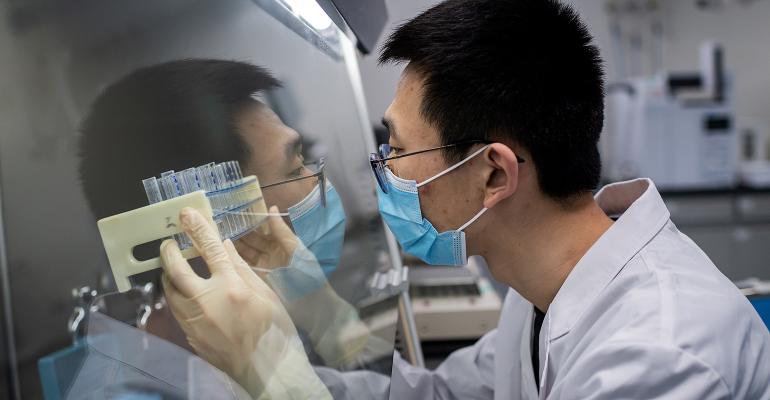 The rush is on to develop vaccines and therapies.

A while back, we discovered that, in spite of the coronavirus-inspired panic, momentum stocks—well, certain momentum stocks, anyway—hadn’t lost their mojo. And, a little while after that, we noted the resilience of health care stocks during the recent sell-off.

Which brings us now to a confluence of momentum and health care: genomics. Companies such as Inovio Pharmaceuticals Inc. (Nasdaq: ION), up 329% this year, and Twist Bioscience Corp. (Nasdaq: TWST), which has gained 97%, are engaged in clinical testing of a COVID-19 vaccine through the development of synthetic DNA.

Of course, not every genomics outfit has produced such stunning returns this year. Picking big winners out of a crowded biotech field isn’t easy, so many investors opt for the fund approach instead. More than a baker’s dozen exchange traded funds could have provided exposure to Inovio and Twist this year.

The weightiest dollop is carried by the iShares Genomics Immunology and Healthcare ETF (NYSE Arca: IDNA), a young ETF that’s still flying under the radar of many advisors and investors. Launched last June, IDNA tracks a global index of 47 companies capitalizing on growth and innovation in genomics, immunology and bioengineering. About a quarter of IDNA’s portfolio is given over to non-U.S. companies.

In a portfolio with a median commitment of 1.5%, Inovio takes up just 1.2% of IDNA’s market capitalization. Twist accounts for a shade under 0.7%. Still, IDNA is up 25% year to date.

IDNA may be difficult for some accounts to hold. First of all, it’s a small fund. The fund’s asset base barely clears $70 million, and daily trading volume, averaging 80,000 shares over the past month, is still light. The real measure of the ETF’s liquidity is reflected in its bid/ask spreads, currently running a little wide at around 20 basis points. Spreads can widen during liquidity events, as the near quadrupling during the February-March sell-off attests.

Now, Inovio isn’t a micro-cap. It’s a small-cap on the cusp of being a mid-tier company. Twist is more lightly valued, though still squarely ensconced at the small-cap level.

Among the other biotech ETFs holding shares of Inovio and Twist, only one is dedicated to genomics like IDNA. The actively managed ARK Genomic Revolution ETF (Cboe BZX: ARKG) predates IDNA by some five years and has been on an upward, if volatile, trajectory since 2016.

ARKG’s allocation to Inovio, at 1%, is a tad lighter than IDNA’s, but the active fund’s commitment to Twist is considerably more robust. Twist takes up 3.5% of the space in the ARKG portfolio. That mix, together with the five other issues common to IDNA and ARKG, accounts in some part for the ARK fund’s 32% year-to-date gain. Investors are paying up for this performance, though. ARKG’s annual expense ratio runs at 75 basis points; IDNA charges 47 bps.

As the first dedicated genomics ETF, ARKG has had time to build its asset base out to nearly $900 million, but that hasn’t given the fund much of a leg up on IDNA in the liquidity department. ARKG’s spreads are on par with IDNA, though its average daily share volume is six times greater than the iShares product. The 35-stock ARKG portfolio’s median allocation is 2.1%.

In spite of the apparent differences between the two genomics ETFs, their price trajectories have been quite similar. Given a 0.89 correlation coefficient, that’s not altogether surprising. 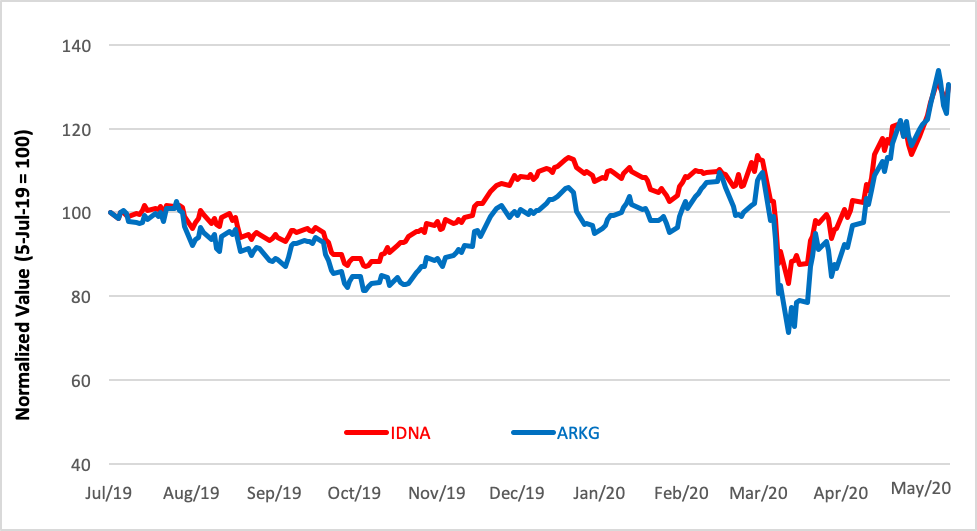 The impetus behind the genomics ETFs’ price ascent is supplied by progress in the development of COVID-19 vaccines and therapies. That said, their trajectories appear overextended. While that’s not sufficient reason to declare their bull run dead, it does mean that they could be subject to dramatic short-term setbacks. Over the long run, though, the funds have the technical oomph to appreciate yet another 65% or so.

What more could a momentum investor hope for?