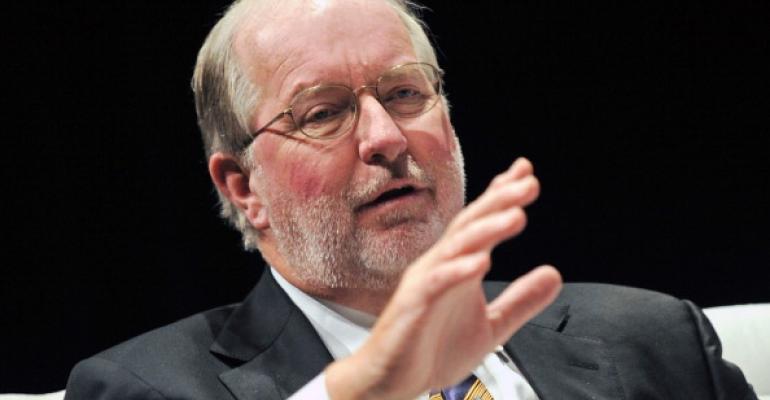 Each morning, Dennis Gartman rises insanely early to pen one of the most respected investment newsletters in the world. Here, his thoughts on whether it makes sense to own bonds at all in the current market, why there will soon be an outflow from international fixed income funds, and how the rush to passive funds has become "almost bubble like."

Each morning, Dennis Gartman rises insanely early to pen The Gartman Letter, one of the most respected investment newsletters in the world. Though often thought of as an equity analyst, Gartman’s interests span the range of capital markets, including commodities, fixed income and more.

Inside ETFs: Should investors even bother owning bonds in the current market conditions?

Dennis Gartman: If you’re talking about long-term debt—anything over, let's say, 10-year Treasurys—the answer's probably no. I think the propensity for interest rates to be higher—not dramatically so, but higher over the course of the next six months to two years—is very strong. I think rates will be up 25 to 50 basis points from here.

At the short end of the curve, anything under five years, the impact of a 25- to 50-basis-point rally in the long end is going to be detrimental, but not materially so. So owning a shorter-term security is probably fine.

But I honestly believe that the more-than-30-year decline in long-term rates has ended, and that it probably ended some time last year. I think we're in for a long-term decline in bond prices and a long-term increase in rates.

IE: What about inflation? Are you worried it could pick up, and if so, what should investors do about it?

DG: Do I think there will be greater inflationary pressures in the future than there are now? The answer to that is yes. I think we're to the inflection point on wage rates, with unemployment rates at 4.3% or so, and with labor participation actually beginning to hold its own.

I don't care where you go, but if you talk to builders, if you talk to manufacturers, they're having trouble finding well-trained, intelligent labor. So now that you're going to start seeing average workweek numbers begin to increase, hourly wages are likely to start going up. So I think the propensity for inflationary pressures to begin showing up are higher, and rising.

Take a look at commodity prices. Something's happened, for example, in the grain business. Grains have clearly come up off their lows and begun to break long-term downtrends. The base metals—which I really think have to be focused upon—all of them have made, I think, important bottoms. Perhaps even crude oil may have seen its lows a year and a half ago, when we were down to $28 per barrel.

I think commodity prices are beginning on their own to turn upward. And if that continues, and if labor rates start to move higher, that means the inflationary pressures are going to be much stronger than have been anticipated.

And so, yes, you should start to be concerned about inflation.

Does that mean inflationary rates are going to go much above 3–5% over the course of the next decade? Probably not. Are we going to see a replay of the inflationary pressures that were extant in the '60s, '70s and '80s? No, that's not going to happen.

IE: 3–5% is still a lot higher than today. Given that, how would you position a portfolio, either for protection against rising inflation or for an opportunity within that kind of market environment?

DG: Well, you can create a couple things. One, I think owning TIPS would probably make sense, because you're at least going to be recompensed for rising inflationary pressures. So perhaps you want to look at five- and 10-year TIPS at the most.

You may want to own—and this'll sound very strange—but you may want to own two- and three- and four-year-old Treasury securities, and hedge that position by buying a little bit of gold. That might be a great play to look at.

IE: One of the things we're seeing in the market as we track ETF flows is the significant uptick in flows into international fixed income ETFs recently. Is that market more or less attractive than the U.S. at this time?

DG: I think it'll be more impacted than the U.S. bond market. I think there's always going to be inherently more difficulty and more propensity for surprises outside the United States than inside.

So if there have been material inflows into foreign bond funds, I think there will be faster and more material outflows in the next two, three and four years. My response to that question is, be careful out there.

IE: What are clients saying about the market? What are they worried about at this time?

DG: I have to deal mostly with pros, and what everybody is confused and concerned about is this incredible flow of money into asset investment, as if that's going to be risk free. The public has sent enormous sums of money into various mutual funds and ETFs, all passive, thinking they’ll be spared when the inevitable bear market comes. And there will be a bear market in equities some time in the next several years; I don't know when it's going to happen, but it will come.

IE: Knowing that, how do we make people realize there are perhaps risks to those passive investments?

DG: By reiterating the fact that there are simply risks to those passive investments. There's nothing more that we can do, other than to reiterate the fact that history will repeat itself. It always does. The rush to passive has now become almost bubblelike in material. And bubbles almost always burst. And when they do, they burst quickly and they burst violently.

I think people should take a look very seriously at reducing their exposure to passive investments, and quietly at the margin. Even if they wish to still be heavily invested, move some of those passive investments over into commodities. Commodities, I think, are extraordinarily cheap relative to equities. I've seen some charts recently that show we haven’t been to these levels in the past two decades.

IE: What keeps you up at night when you look at your own portfolio?

DG: The fact that we have taken equity prices to, I think, rather extreme price-to-earnings multiples, and we've taken margin numbers to historically high numbers. I worry that the public feels—even though they’ve rolled huge amounts of money into passive ETFs and passive mutual funds—that they’re not involved in the market. And indeed they are; they're heavily involved.

That's what keeps me up at night—that and political circumstances. I get up at one o'clock each day to write my eight or nine pages for the Gartman Letter, and my first response is always to check my Reuters machine and see if anybody has attacked anyone else overnight.

What has North Korea done? What have the Russians done? What’s happened in Syria? Has there been any expansion of the problems in Qatar versus South Arabia? The political circumstances keep me up at night.

IE: Given all that uncertainty, would you recommend people go to cash right now? Or are inflation concerns too great there?

What's a reasonable amount of cash? I think you probably should have a quarter, maybe a third of what you had in the market now in cash. If prices still go up, you still have an exposure. But if prices go down, you'll have cash. And cash will become king some time in the not-too-distant future.

I think the proper mix is 25–30% cash, 5–10% commodities, 5–10% gold, and the rest back in what has done you so much good over the course of the past several years: an exposure to the equities market. Just be less exposed. I think that's the proper course of action.

IE: Knowing you're coming to our Inside Fixed Income conference, and you'll be engaged in a spirited debate with Bob Smith from Sage Advisory, what's something our audience can expect to learn from you when they hear you on stage that day?

We can go back to the 16th and 17th centuries and construct hundreds of models of what happened back then, especially from the old British councils, which were an eternal security. You could see how, over the course of 15, 20 and 30 years, rates rose. And how over the course of 15, 20 or 30 years, rates fell, how enormously cyclical, and how long term those changes are.

I think we'll look back and find out that the low in rates, the high in bond prices, worldwide, occurred sometime late 2015/early 2016, and we're only now beginning to understand that fact.

The problem is, the cycles take so long, they go past one generation to another, and very few people are left around to say, “I've seen that before.”

All we have now are people who've seen falling rates for most of their lifetime, and that's all they understand. There are few gray-beards such as myself who can say, “You know what? I remember when the long bond had a 14% coupon.” That was a different world.

IE: Well, Dennis, thanks. I appreciate your taking the time to chat, and I look forward to seeing you out at the Inside Fixed Income conference.