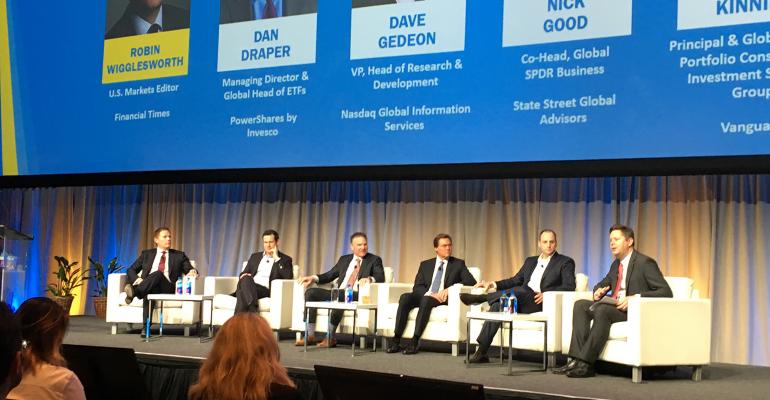 The ETF wrapper has become commoditized. Going forward, what will be important is what’s inside, asset managers say.

The popularity of exchange traded funds is undeniable. Assets invested in ETFs and exchange traded products in the U.S. reached a record $3.42 trillion at the end of last year, according to ETFGI. The vehicle has solidified its importance in the asset management world, but going forward, it will be more about the content of ETFs than the wrapper, said panelists at the annual Inside ETFs conference in Hollywood, Florida.

“The wrapper itself is fairly commoditized, but it’s a fintech innovation,” said Dan Draper, managing director and global head of ETFs at Invesco. “The content—that’s really where I think the value-add comes through, particularly as we’ve looked at the Guggenheim transaction.”

Late last year, Invesco announced its intention to purchase Guggenheim’s ETF business. The firm also closed on its acquisition of Source, a provider of ETFs.

“I do think economies of scale matter tremendously in this industry, and the ability to reach and have varied solutions,” Draper said.

The Guggenheim acquisition, for example, will expand the firm’s ETF content. He likened the ETF innovation to the internet and the mass customization that consumers are now used to in many parts of their lives.

“If you look at any industry cost curve, it’s usually determined by the marginal cost of the lowest-cost provider,” he added. “But I think that’s where the content comes in and matters. If you’re able to really own or have unique content that can come in and add value—active or passive—to a portfolio, I think it’s definitely going to make a big difference.”

Ted Lucas, head of investment strategies and solutions at Hartford Funds, said the jury is back and determined that the ETF is the package of choice. But in the future, allocators—such as institutions and advisors—will find it harder to get the returns they need. That’s one of the reasons they seek factor investing, for example.

But Lucas warns of a radical shift on the risk management side, where bonds—traditionally the best insurance policy ever—will have correlations much closer to that of equities.

Fran Kinniry, principal of the investment strategy group at Vanguard, said we’re still in the early stages of the low-cost revolution. He attributes the shift to the stewards of capital—retail investors and advisors—who are making smart decisions based on the facts, which says that costs are an important driver.

But Nick Good, co-head of the global SPDR business at State Street Global Advisors, said his firm is reaching the limits of low price. There’s a cost to managing these passive vehicles, and cost is not the only factor attracting investors to State Street’s funds. The manager just recently repackaged some of its existing funds as ultra-low cost. (They’ve raised $8 billion in these funds.) No one would’ve bought those funds if they weren’t at scale and liquid, he argued.

“No one buys the third brand of Coke.”