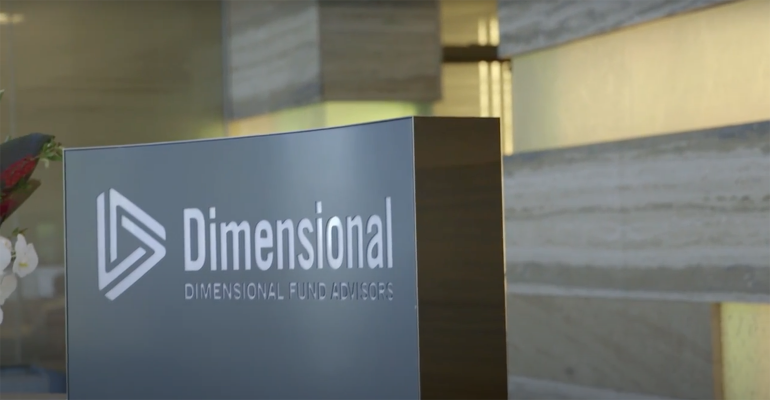 An Exclusive $500 Billion Quant Will Soon Be Open to Anyone

In late June, DFA filed to launch its own exchange-traded funds -- meaning for the first time ever its strategies will be available to anyone with a brokerage account.

(Bloomberg) -- When Rick Ferri wanted to invest his clients’ money with Dimensional Fund Advisors, it wasn’t as simple as cutting a check. First he had to get through boot camp.

The pioneering quant firm’s strategies were off-limits to all but approved investment advisers, and an intensive two-day training course was its vetting process. So in 1999 Ferri booked a slot, packed a bag and hopped on a plane.

In Santa Monica, California, he was immersed in the DFA philosophy. Alongside fellow attendees he was schooled in the theory underpinning its approach, taught the science behind its main strategies and wowed by a charismatic team that included Ken French -- a legend of the investing world.

Advisers like Ferri who made the cut typically went on to sell DFA products for years. Over decades, their loyalty and training helped grow the Austin, Texas-based firm founded by David Booth into a juggernaut managing $500 billion.

Now, the era of exclusivity is ending. In late June, DFA filed to launch its own exchange-traded funds -- meaning for the first time ever its strategies will be available to anyone with a brokerage account.

“That’s a really big deal,” says Michael Kitces, head of planning strategy at Buckingham Wealth Partners, a long-time seller of DFA funds. “DFA is one of the biggest success stories of being exclusively adviser-sold.”

It was also among major asset managers holding out against ETFs -- a group that’s dwindling fast.

“Everything that made DFA this big cult in the early to mid-2000s turned against them,” reckons Ferri, founder of Ferri Investment Solutions.

When he attended the DFA boot camp, the company was at the cutting edge. Technology and academia were converging to accelerate quantitative trading, and factor investing was one of its major disciplines.

While French was a professor at the University of Chicago alongside fellow DFA director Eugene Fama, they showed that characteristics including small size and low valuation explained equity outperformance. Investors could beat the market by picking stocks based on these “factors,” and that’s what DFA did.

In the years following the dot-com bubble it worked beautifully, but there was a shift over the past decade. Powered by an index-tracking boom, the U.S. ETF market swelled to $4.6 trillion -- growing twice as fast as the mutual fund industry -- just as the strategies DFA pioneered misfired.

Both value and small-cap stocks have underperformed a large-cap index by at least 60 percentage points since 2010, Russell indexes show. DFA’s $26 billion International Core Equity Portfolio is set for a third year trailing its benchmark.

It’s not alone. Quant competitors including AQR Capital Management LLC -- another ETF holdout that applied to launch its own but never did -- have suffered similarly. But while many of their peers have moved to revamp traditional factors and find new sources of returns, the likes of DFA and AQR remain steadfast in their traditional beliefs.

The Texan firm has total commitment to the science it drills into advisers, and preaches the virtues of success over the long haul rather than chasing every market trend. Even a small tweak to DFA models can be years in the making.

Adviser demand and a recent rule change are behind the decision to offer ETFs, according to Dave Butler, DFA’s co-chief executive officer. He says the quant giant has no intention to make any wholesale adjustments to its business model.

“ETFs are accessible at the retail level but we have no interest whatsoever in working with retail clients,” Butler says. “We’re an asset manager, that’s all we do. We don’t do advice.”

DFA’s deliberative approach meant the pivot toward ETFs was a slow process.

As adviser demand began to grow, the firm seem determined not to rush into creating its own. Instead, in 2015 it agreed to sub-advise on ETFs from John Hancock Investment Management.

“If they launched ETFs anybody could have access to DFA funds, and they didn’t want that,” says Ferri. “You don’t bite the hand that feeds you.”

Under the long-standing model, advisers got a relatively cheap and comprehensive line-up of funds and the prestige that came with access, and DFA got a loyal army taught to sell their story.

Crucially, the firm sought advisers that wouldn’t trade in and out of its funds too often -- behavior that might have eroded the effectiveness of its factors.

ETFs, with their easy access and low costs, threaten to encourage exactly that kind of trading. But the clamor from advisers grew too loud to ignore.

Kitces at Buckingham Wealth says pressure on fees means advisers are increasingly avoiding active managers and handling portfolios themselves -- which is easier to do with ETFs.

“We don’t necessarily have enough time to analyze 300 different stocks and bonds,” he says. “So we might analyze the universe of ETFs instead.”

If anyone at DFA needed persuading about the direction the industry was heading in, they didn’t have to look far.

Eduardo Repetto was co-CEO at the firm until his departure in 2017. Last year, with the backing of American Century Investments, he launched Los Angeles-based Avantis Investors.

The Avantis investment philosophy is almost identical to that of DFA, and its website names no fewer than 14 employees who used to work for the quant giant. The difference is Avantis uses ETFs.

“It’s a more modern technology,” Repetto says. “You don’t use a pay phone. You use an iPhone.”

In less than 12 months, Avantis has amassed $1.4 billion across its five funds. DFA posted $21 billion of outflows over the past year, Morningstar data show.

DFA chief Butler says the decision to offer ETFs -- just three to start, a fraction of the firm’s overall offerings -- has no link to the early success of Avantis.

The capitulation of a long-term ETF holdout like DFA raises a question: How many more will do the same?

Most active managers, be they systematic or discretionary, have struggled to beat bland index funds in recent years, and face mounting pressure to justify their typically higher fees.

At the same time, intense competition has pushed charges ever closer to zero in the ETF world, compounding the risk of cash fleeing mutual funds. Even slow-moving DFA has been unable to ignore pressures like that, and last year the firm cut charges on 77 of its funds.

For many active managers, the 2019 ETF rule change may have been the breakthrough they were waiting for.

Among other things, new regulations have dramatically lowered the disclosure demands for certain structures, meaning a firm can offer the tax benefits and easy access of an ETF without fully exposing their proprietary strategies. It sets the stage for more names to follow DFA’s lead.

“It’s a changing marketplace and DFA finally came around and said, ‘We will provide,’” Ferri says. “In the next 10 years it’ll be very rare to find any mutual fund company that doesn’t have ETFs.”

To contact the reporter on this story:
Justina Lee in London at jlee1489@bloomberg.net

To contact the editors responsible for this story:
Lynn Thomasson at lthomasson@bloomberg.net
Sam Potter, Sid Verma