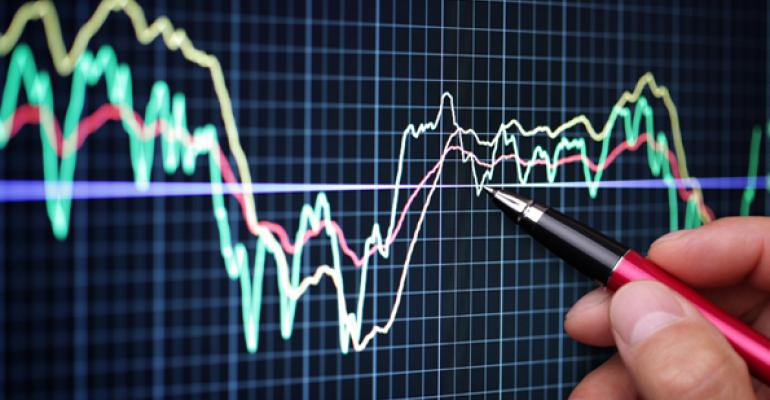 Talking about what’s “normal” in politics is always fraught with subjectivity. So let’s tackle the concept by talking about something totally different: exchange-traded funds.

(Bloomberg View) --As a new political era dawns, the phrase “this is not normal” has become a popular rallying cry. Critics everywhere warn against the “normalization” of radical ideologies or the disruptive behavior of the new U.S. president.

But talking about what’s “normal” in politics is always fraught with bias and subjectivity. So let’s tackle the concept by talking about something totally different: exchange-traded funds, or ETFs. Many readers probably know that ETFs are funds made up of underlying securities or commodities that trade on an exchange all day long, just like a stock. In addition to the ease of buying and selling, they typically carry lower fees than mutual funds. They also happen to be one of the most disruptive technologies in the world. There's been a huge move among investors from typical, actively managed funds into ETFs, a trend that fills a good chunk of the financial industry with dread.

The history of the ETF is fascinating. The initial concept, as Bloomberg’s Eric Balchunas wrote last year, came out of an 840-page report published by the Securities and Exchange Commission after the 1987 Black Monday stock market crash. The report posited that something like an ETF could have mitigated such a crash by allowing traders to easily take a liquid position in the entire market. A few years later, in 1993, the SPDR S&P 500 ETF Trust was born, and it remains the single biggest ETF to this day.

Although the ETF may have originally been conceived of as a way to gain simple, liquid exposure to the entire market, that narrow vision didn’t last. In 2000, the first ETF was launched that was specifically designed to give investors exposure not to the whole market, but to so-called value stocks, or those that are deemed to be cheap relative to some yardstick such as earnings or dividend yield. In 2002, the first bond ETF was launched. During the past decade there’s been an explosion of ETFs, offering easy, liquid exposure to all kinds of strategies and asset classes worldwide.

For example, an investor can buy the Direxion Daily Junior Gold Miners Index Bear 3X Shares ETF, which takes a triple levered bearish position on a daily basis against small gold-mining stocks. There are currency-hedged ETFs, such as the iShares Currency Hedged MSCI Japan ETF, which lets you take a position in foreign stocks while instantly hedging out the currency exposure. Goldman Sachs Group Inc. recently launched the Goldman Sachs Hedge Industry VIP ETF, which tracks stocks that are widely held among hedge funds, allowing investors to piggyback on hedge-fund managers' collective wisdom. The list of permutations just goes on and on.

For the first part of 2016, there was a huge rush of baby boomer money into low-volatility ETFs that give investors exposure to the least-volatile stocks in the market. Let’s dive a little bit further into this particular type of ETF.

For a long time, there has been a body of academic finance literature that says a portfolio of low-volatility stocks outperforms the market while also offering more safety. Here’s a relevant paper from 2003 talking about the connection between returns and volatility. The economist and investor Eric Falkenstein has been writing and blogging about low-volatility investing for years.

But the key thing to realize and think about here is that the strategy has been essentially off-limits to most people. How many people, outside of sophisticated traders, would know how to set up a continuous screen for the least-volatile stocks in the market and then turn that screen into a portfolio that continuously rebalances itself? Bear in mind, too, that we're talking about a portfolio of about 100 stocks.

So what was once an essentially impossible strategy for the average investor to replicate is now as simple as buying a share of Microsoft Corp. It just takes a few clicks. Instead of typing in MSFT (Microsoft’s ticker) just type in SPLV (a popular low-volatility ETF). An entire strategy executed by a change in four letters. This is fundamentally what makes ETFs so powerful. Want currency-hedged exposure to Japanese stocks? Click. Want to go long emerging-market sovereign debt? Click. Want an ETF that invests in other ETFs that are showing the most market momentum? It’s all right there, one click away. Even something as simple as the SPDR Gold Shares, an ETF that lets anyone go long gold, is practically revolutionary. No need to worry about carrying heavy gold or buying a big safe for storage in your basement. Just put in a “buy” order!

But back to the phenomenon that’s happening with politics today.

In high school I once traveled from Vermont to New York City and was enthralled by the See Hear zine store in Manhattan’s East Village. It closed in 2003, but it carried underground print that the average person would never see on a newsstand; it certainly wasn’t available in my town of 12,000 people. The store was controversial, in part because as part of its free speech ethos it even carried white supremacist print material (go to the 10-second mark of this video on YouTube, you can see a copy of a newspaper for the White Aryan Resistance on its shelves). Not only did See Hear sell publications on a range of things you’d normally never see… the physical ambiance of the place was nothing like your typical Barnes & Noble. You knew in your bones you weren’t in a normal place.

Today it takes little effort to discover non-mainstream ideologies and there’s no physical sensation of going somewhere weird. I can go on Facebook and “like” a mainstream news organization like CNN and then a second later I can “like” Infowars, the site run by the influential right-wing conspiracy theorist Alex Jones. And unlike buying a zine in the ’90s, liking a Facebook page automatically supplies you with a community of ideological fellow travelers. Previously, that community was either difficult to find physically or imaginary.

Sometimes political ideology is depicted as a map, with the various poles representing extreme ideologies, from anarchism to fascism. And although these maps are meant to be metaphorical, getting to these outer poles once took considerable time and effort.

Thus the Facebook page (or the YouTube channel) becomes to ideology, what the ETF is to investing. It eliminates the work required to go beyond plain vanilla, and it equalizes everything by placing all content into identical wrappers.

ETFs are still rocking the financial world and by most accounts they still have plenty of room to grow. The parallel to politics suggests that any attempt to maintain some definition of politically “normal” will be very hard.

Joe Weisenthal is the co-host of "What'd You Miss?" on Bloomberg Television and an editor at Bloomberg Markets.