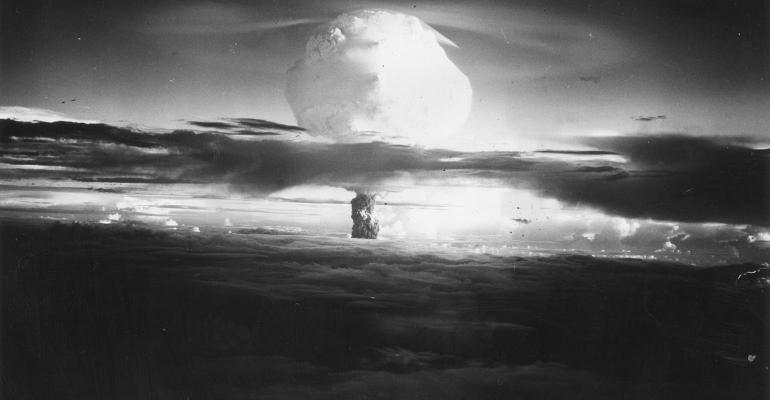 ETFs Aren't About to Destroy the Investing World

Blaming ETFs for the woes of stock pickers misses the point.

(Bloomberg View) --A Bloomberg News article caught my attention last week. It cited the managers of FPA Capital Fund Inc., an actively managed equity fund, making the following assertion in their quarterly letter  to investors: “Exchange-traded funds are ‘weapons of mass destruction’ that have distorted stock prices and created the potential for a market selloff.”

Although I believe that statement not only is problematic but also wrong, I decided to download and read the complete missive of co-managers Arik Ahitov and Dennis Bryan. They say lots of interesting things, and dissecting what the managers of this $789 million fund wrote is our charge today.

No. 1: Fundamentals no longer matter

Let’s assume the assumption is true; the key question is, “Does it matter?”

First, there have been many forms of stock analysis where the fundamentals are not relevant and haven’t been for a long time: momentum investors for starters care little about fundamentals; the same for technical analysis. Pure quantitative research may or may not use fundamental inputs. These are all substantial schools of analysis, and they support billions or even trillions of dollars in investments.

Second, smart beta -- also known as fundamental indexing -- has been one of the fastest-growing areas of indexing and ETF creation. It has captured more than a half-trillion dollars in assets. Using fundamentals to create indexes instead of market-capitalization weighting demonstrates that fundamentals are critical to many indexers. To suggest otherwise requires you to ignore $500 billion in smart beta investments.

No. 2: Valuations are too high

As we observed last week, trying to judge whether a market is overvalued is a fool’s errand. Pricey stocks can and do get pricier, often for years. If your strategy is to wait for prices to decline to where you think they should be before buying, the market might very well outlast your patience.

No. 3: ETFs will cause trouble during selloffs

We don’t need to hypothesize about what might happen during a market dislocation. We have a real life experience to use as our base case: The 2008-09 financial crisis.

The experiences of two of the larger index-fund companies, Vanguard Group Inc. and Dimensional Fund Advisors LP, are fairly instructive. Almost all of their account holders sat tight during the selloff. Most of the panic was located was in other parts of the financial system.

No. 4: Too much margin debt

We have discussed this several times before, but let’s remind readers: Margin debt isn’t a leading indicator, nor does it indicate that markets are overpriced. It rises as stocks rise; it falls as stocks fall. For more on this, see our earlier discussion on New York Stock Exchange margin debt, “A Market Indicator That Predicts Nothing.”

The argument here seems to be that inclusion in an index supports the prices of stocks that otherwise would or should fall. This feels like it makes intuitive sense, but it’s wrong.

McKinsey & Co., for example, looked at what happens when companies are added to or removed from the S&P 500. Although the announcements could “move a company’s share price” their study found “that effect is short-lived, and inclusion in a major index is not a factor in a company’s long-term valuation.” And just to cite the most egregious example: International Business Machines Corp. was removed from the Dow Jones Industrial Average in 1939 (it was reinstated in 1979). But instead of falling, IBM soared, a rise that deprived the index of 22,000 points.

Beware of making a correlation-causation error. The factors that lead a stock to be included in the index are the same ones that lead to a rising share price: Increasing revenue and profits. Of course, when a company is removed due to other factors -- such as insolvency or scandal -- it isn’t the removal but the underlying problems that are to blame for any subsequent poor performance.

No. 6: Stocks are richly priced, so hold cash:

The FPA managers seem to blame ETFs for the current market environment. This has led them to the wrong conclusions. Their fund has held as much as 35 percent of its assets in cash the past few years, although that has since declined. Cash is fine if markets fall, but markets gained in six of the past eight years. Given how much cash FPA has held, it should come as no surprise that the fund has underperformed its benchmark by 66 percent and trailed 99 percent of its peers during the past five years.

Perhaps the frustration of the FPA managers is understandable. But their performance issues seem to be the result of their own investment strategies, rather than any shortcomings in ETFs.

The bottom line remains this: ETFs and index investing attract capital because they are inexpensive and outperform the vast majority of active managers. Blaming ETFs for the woes of stock-pickers misses the lesson the market is trying to teach.