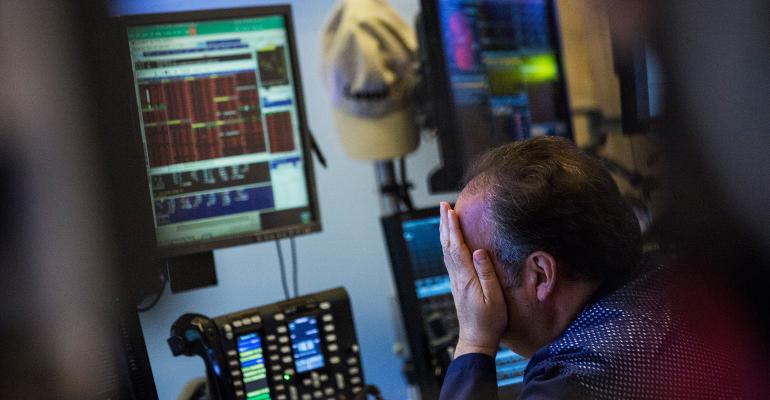 By the end of September, 42 exchange-traded funds are set to close, the most ever in a single month. Of those, 21 are leveraged or inverse funds.

(Bloomberg) — Add another item to the list of things low volatility is doing to the market: record amounts of ETF closures.

By the end of September, 42 exchange-traded funds are set to close, the most ever in a single month, according to data compiled by Bloomberg. Of those, 21 are leveraged or inverse funds, which tend to attract investors when prices are volatile but can fall out of favor when stocks are as calm as they have been all year.

One fund that’s set to close on September 25 is Direxion’s Daily Homebuilders & Supplies Bear 3x ETF, (ticker: CLAW). The ETF, which makes leveraged bets that homebuilders’ stocks will fall, has been drained of assets this year as the sector has charted a steady upward course. CLAW has shrunk to just $1.36 million in assets, down from $7.83 million at its peak in February 2016. "For traders, volatility represents movement and therefore opportunity, but when there’s very little volatility, these products don’t get as much use," said Andy O’Rourke, chief marketing officer for Direxion.

Wall Street banks like Citigroup Inc. are blaming unusually calm markets for their poor trading results this quarter. Not even mounting tensions with North Korea or deadly U.S. hurricanes have been enough to trigger substantial volatility among stocks. On September 18, CBOE’s Volatility Index, or VIX, fell below 10 for the first time since August.

Milwaukee-based Direxion is shuttering 12 leveraged and inverse ETFs this month, according to a company release. Besides CLAW, there’s DULL, a leveraged ETF tracking the stocks of silver miners, and SICK, a fund that bets against health care shares.

"All ETFs tend to trade more when there’s more volatility, but definitely leveraged products," said Eric Balchunas, an analyst at Bloomberg Intelligence. "When those kind of volatile swings aren’t happening, it’s just not as fun of a game to play."

Of course, with leveraged and inverse ETFs, it can sometimes seem like the spaghetti cannon is set permanently at 11, which means closures occur more often than usual. Among this month’s planned delistings is the Direxion Daily Cyber Security & IT Bull 2x Shares fund (ticker: HAKK), with $5 million in assets.

Coincidentally or not, HAKK, which is two times leveraged, was launched in September 2015, just a few months after the ETFMG Prime Cyber Security ETF (ticker: HACK), an unleveraged fund tracking cybersecurity companies, ballooned to over $1 billion in assets. A massive computer breach at Sony Pictures Entertainment Inc. spurred investors to pour money into companies in the business of thwarting such attacks.

While HACK used this momentum to keep growing, at one point climbing to more than $1.4 billion in assets, HAKK never expanded beyond $6 million.

Issuers of inverse and leveraged ETFs often "overestimate the market’s demand for leveraged, where it’s just too early in some cases," said Balchunas. But sponsors of the products, which represent around 2 percent of ETF assets and around 9 percent of trading volume, are in a unique position to shoulder that risk. Such issuers don’t necessarily have to compete to have the lowest fees because users hold the products for as little as a few hours.

"One thing people don’t realize is how much money leveraged issuers make, and how they don’t have to play the fee war game. If anyone can trial-and-error, launch-and-close, it’s leveraged issuers," said Balchunas.

Ironically, leveraged ETFs linked to the VIX have rarely had it better. The VelocityShares Daily 2x VIX Short Term ETN and ProShares Ultra VIX Short-Term Futures ETF collectively received $337 million of inflows last week, the most since 2016. Traders seem more willing or able than fund providers to bet on a resurgence of market jitters.

Other firms that are shuttering funds this month include Elkhorn Investments LLC, VanEck Vectors and ProShares Advisors LLC, which is closing 13 ETFs, including nine inverse and leveraged funds.

Still, just because some funds are closing doesn’t mean providers are giving up on them. Direxion’s O’Rourke said he still believes there’s potential for a leveraged ETF on the cybersecurity theme, similar to HAKK.

"We still think it’s something that may have some legs to it," he said.

To contact the reporter on this story: Carolina Wilson in New York City at [email protected].

To contact the editor responsible for this story: Yakob Peterseil at [email protected]