Does Stock Risk Need to Be Collared Now?

With the HYG/LQD ratio falling, hedging against a drop in SPY can be done for little or no cost.

The nostrum that history repeats itself is often derided by market pundits. Maybe it just rhymes, some say. Or there’s nothing cyclical at all, say others. It’s always different this time, they add.

When I look at a chart of the HYG/LQD ratio, I’m tempted to throw my hat in with the believers in repetition. HYG/LQD? Wazzat? 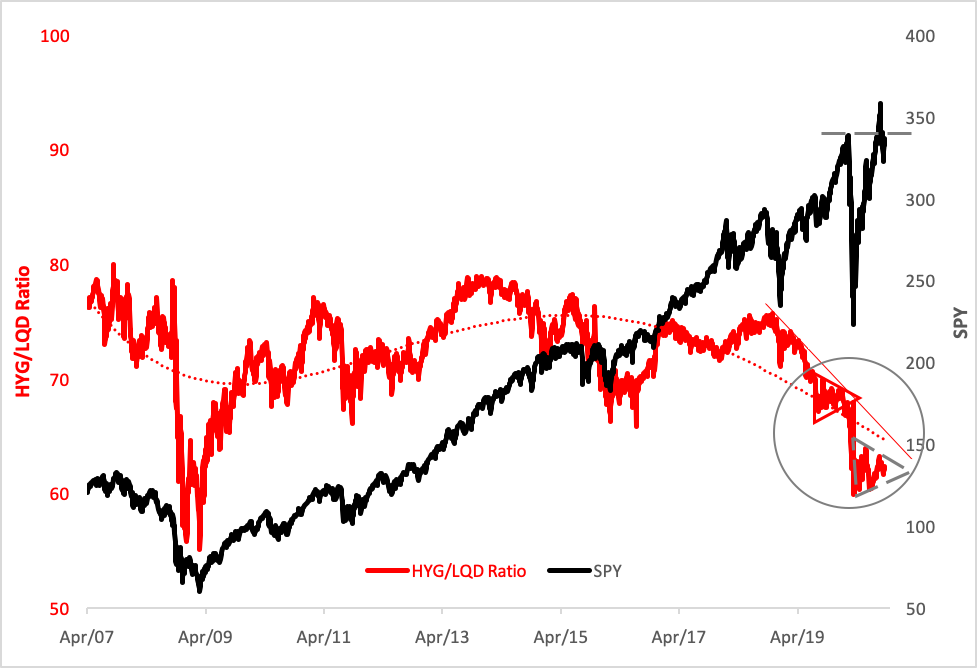 The iShares iBoxx $ High Yield Corporate Bond ETF (NYSE Arca: HYG) tracks a market-weighted index of U.S. junk paper (mostly BB- and B-rated), with an average weighted duration of about four years. At the other end of the nominal risk spectrum is the iShares iBoxx $ Investment Grade Corporate Bond ETF (NYSE Arca: LQD), which is composed of higher-rated (predominately A and BBB) credits with longer average maturities and duration.

The higher the HYG/LQD ratio, indicative of tighter credit spreads, the more investors are amenable to stock market risk. Wide spreads and a falling ratio warn of rough seas for equities.

The ratio has pointed to bullish stock market overextensions in the past. Note the red symmetrical triangle in the chart above. The pattern bespeaks a congestion area of lower highs and higher lows in the ratio. Like a coiled spring, the chart formation foreshadows an impending release of energy. This is a continuation pattern, heralding an explosive move in the direction of the ratio’s prevailing trend. In this instance, the pattern foretold the February 2020 break in the upward trajectory of the SPDR S&P 500 Trust (NYSE Arca: SPY).

And now? There’s another triangle forming, marked above with gray dashes. The ratio’s still trending downward, so this points to another bearish break. Now look at SPY’s price action. There’s been an overshoot from the March “V” bottom, a break above its previous top followed by a peak in early September. Since then, SPY has fallen below its pre-COVID-19 level, which is now acting as resistance.

So, what’s this mean? Most likely, more weakness in both the HYG/LQD ratio and SPY (and, by inference, the S&P 500). In the short term, a further 10% decline—to the 299 level—seems probable for SPY. But the risk of further declines looms large since the HYG/LQD ratio points to a slide to the 0.56 level, a plateau last seen in the 2008–2009 Great Recession.

So, what if you own the SPY? Is it time to bail? Well, maybe. But maybe a hedge will suffice. Some basic option strategies can be employed by accounts with the lowest level of option approval, requiring no margin at all. The beauty of these hedge strategies is that they allow an investor to ride out near-term volatility and hold SPY shares for a potentially better selling opportunity at a later date.

Many investors are familiar with covered call writing, for example. The trade’s simple and provides a modicum of downside protection. For every 100 SPY shares held in account, one SPY call can be sold.

With covered calls, the amount of hedge protection is determined by the premium received. The investor’s breakeven point is lowered by the call receipts. For example, if SPY shares were originally purchased at $300 and calls were sold for $9 per share, the market would need to sink below $291 before expiry to put the investor in the red.

Covered call writers risk having their SPY shares called away if the market rallies above the option’s exercise price before expiration. Their returns would amount to the difference between the calls’ strike price and their SPY cost basis plus the call premium received.

A more defensive position could be adopted by simply marrying puts with the SPY shares. Buying puts, of course, requires a capital expenditure, but the marriage creates the functional equivalent of a long call on SPY: limited downside risk (equivalent to the difference between the shares’ cost base and the puts’ strike price together with the puts’ premium) and unlimited upside from the SPY cost base, reduced only by the option premium paid.

If an account owns SPY shares with a $300 cost base, for instance, and purchases $290 puts at $3 per share, the maximum downside risk would then be $13 per share. Any SPY movement above $303 represents an overall profit.

Savvy hedgers, though, would look for a way to minimize downside exposure for little to no cost. For them, a collar strategy might be ideal. A collar combines a covered call with a married put as an offset to the risk/reward characteristics of holding SPY shares.

Here’s an example: With a SPY cost base at $300 and a current market value of $333, calls struck at $338 could be sold at $11 while $330 puts could simultaneously be purchased for $11. In this case, call sales would subsidize the put purchases entirely, leaving the investor with no net hedging cost. Because of this, the investor’s breakeven point remains at the $300 original SPY basis.

The combination of the purchased put and the written call creates a synthetic short SPY position, effectively hedging the shares held in account. That translates to limited upside potential and limited downside risk. During the collar’s tenure, the upside potential is the difference between the calls’ strike price and the SPY cost base, or $38 per share. The downside risk maxes out at the spread between the shares’ basis and the puts’ exercise price, or $30.

Hedging requires some finesse. A hedge should not expire too soon nor cost too much. A collar, done at little or no cost (or perhaps even a net credit) could buy an investor enough protection to wait out a period of expected volatility while holding open the prospect for better market conditions thereafter.