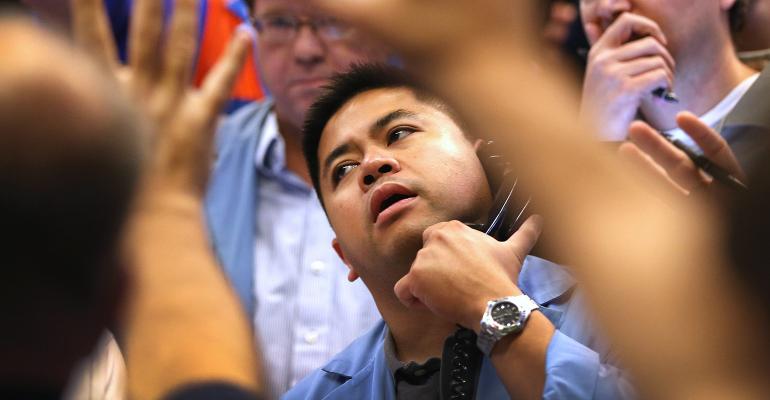 A Bleak Year for Bond ETFs

As interest rates rise and U.S. deficits are set to increase, bond ETF investors have suffered so far this year.

Fixed income, exchange traded funds have seen a massive inflow of money in recent years. The funds generally represent an inexpensive, liquid and often tax-efficient vehicle through which investors can obtain a broadly diversified bond portfolio.

But that may be a trap for some passive bond investors; these funds won’t do investors much good if continued interest-rate hikes by the Federal Reserve and strong economic growth push bond prices down.

This hasn’t been as much of a concern in recent weeks, as bond prices have risen amid speculation that the Fed is close to the end of its rate increases and amid forecasts that economic growth will slow markedly from its torrid pace in the first half of the year.

But plenty of economists still believe the Fed could raise rates as many as four times next year, and that would mean big problems for passive bond ETFs. Many bond ETFs remain deeply in the red for 2018, even after the bond rally that began in early November. The Vanguard Long-Term Bond ETF generated a negative return of 8.17 percent for the year-to-date through Nov. 30.

Another issue is that Treasurys make up an increasingly larger portion of the fixed income world—and now stand at more than 46 percent (as of March) of the Bloomberg Barclays U.S. Aggregate Bond Index. That’s important because many bond ETFs are benchmarked to that index, and as new Treasurys are issued by the government, or roll off the Fed’s balance sheet as it unwinds its quantitative easing program, many ETF investors will be forced buyers of these government securities just as rates are rising.

Treasury issuance will increase to finance the exploding budget deficit. That issuance by itself will depress Treasury prices by increasing supply. In addition, because so many of the new Treasurys will have maturities of 10 and 30 years, the AGG’s duration will likely increase. And longer duration means higher interest-rate risk.

In addition, starting in Oct. 2017, the Fed began normalizing its balance sheet by letting its holdings of Treasurys roll back into the market upon maturity without repurchasing their equivalent, as they had under their quantitative easing program. That means ETFs pegged to the AGG will be forced buyers of often longer-maturity Treasurys. All this could lead to AGG-indexed ETF investors holding an increasing slice of less-than-desirable securities.

Still, money is flowing into bond ETFs, including funds that aren’t tied to the largest bond index, as well as more tactical, actively managed bond funds. Morningstar Direct counts 357 U.S. fixed income ETFs with assets of $620.2 billion as of Oct. 31. The funds saw a net inflow of $66.79 billion for the first 10 months of the year, following an influx of $126.08 billion for all of 2017.

“In general, ETFs are probably the most efficient way to get access to bonds, says Dave Nadig, managing director of ETF.com, an ETF research firm owned by Cboe Global Markets. “Even at the Treasury level, there is less liquidity than stocks, so investors aren’t comfortable trading them.”

That fee difference is particularly handy for investors who can choose an ETF version of an actively traded mutual fund they like. “Active management has historically done better in fixed income than in equities,” says Todd Rosenbluth, director of ETF and mutual fund research for CFRA, a research firm. “You can find consistently strong-performing bond funds using active management.” So if there’s an actively traded ETF version of a successful mutual fund, why not switch?

As the fixed income ETF market has grown, so has the range of offerings in funds. “Investors can select exposures to all corners of the bond market—from the Bloomberg Barclays Aggregate Bond Index to more niche areas of the market that had been inaccessible, like bank loans,” says Ben Johnson, director of global ETF research for Morningstar.

The intraday liquidity offered by ETFs is important for investors in the more esoteric bond sectors, where trading can be volatile, pushing investors to shift in or out of a position quickly, Nadig says. “If you’re in something like junk bonds, then intraday liquidity matters.”

He says bond ETFs have a potential fairness advantage over their mutual fund brethren, citing the Third Avenue Focused Credit Fund as an example. In 2015, suffering from poor performance and investor withdrawals that ultimately led to its demise, the fund had to sell liquid assets, leaving it with its weakest quality assets.

“That can’t happen at an ETF, because you are just selling shares to another buyer,” Nadig says. “So there’s not a need to unload the least risky securities in the fund.”

Experts see several advantages to investing in bond ETFs rather than individual bonds. “Once you’re outside Treasuries, being an individual investor can be a problem,” Nadig says. “You generally can’t trade in small lots, so you have a multi-thousand-dollar exposure. That may not work for a dollar-cost-averaging strategy.”

In addition, investors have to figure out how to ladder their bond maturities on their own. An ETF will generally have a targeted maturity range. That means less work than managing your own bond portfolio. It also will be more expensive for investors to buy individual bonds, Nadig says. “You will pay a wider spread on individual bonds than on ETFs tracking the same bonds.”

To be sure, experts stress that some of the newer bond-ETF flavors involve substantial risk. “There are now more esoteric areas of the fixed-income market open to a wider investment community--areas they might not have any business dabbling in,” Johnson says.

Bank loan and leveraged loan funds are examples, Nadig says. “Those can be tricky corners of the market to navigate. They bring additional risk to a traditional bond portfolio.” It’s now as easy to trade the junkiest of junk bonds through ETFs as it is to trade Apple shares, he says.

That may not be a good thing, and it means investors have to pay close attention to what they’re buying. “Just because something trades like water and has a ticker doesn’t mean it’s good for your portfolio,” Nadig says.

Despite the run-up of interest rates this year, money has continued to flow into bond ETFs. Much of that influx is going to short and ultra-short funds. Ultra-short ETFs saw an inflow of about $7 billion in October alone, Nadig says.