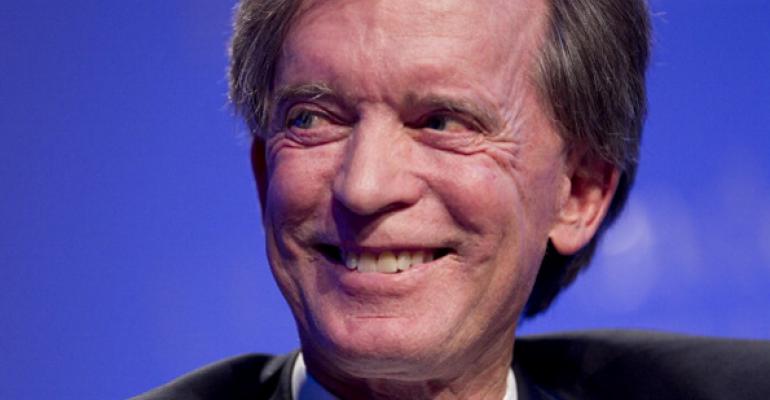 PIMCO’s Total Return ETF has proven the skeptics wrong and outperformed the flagship fund that shares its strategy.

It’s done that and more. Since it started operating this spring, the new fund has been leaping past the benchmark and outpacing PIMCO’s flagship. In March, when interest rates rose and the benchmark lost 0.6%, Gross’ wizardry saw the ETF gain 1.8%, compared to a flat return for the flagship fund, according to Morningstar.

The new fund maintained an edge again in April, returning 1.9% for the month, compared to 1.5% for the mutual fund and 1.1% for the benchmark. During the next three months, the story was the same: The ETF outdid the benchmark by more than half a percentage point every month.

Beating the benchmark was not surprising; Gross has been doing that for decades. But there had been little reason to expect that the ETF would surpass the mutual fund so regularly. Before the launch, PIMCO explained the two funds would both be managed by Gross and follow a similar strategy.

So what’s the difference?  The new fund has a big advantage because of its size, says Timothy Strauts, a Morningstar ETF analyst. The ETF started with $100 million in assets and has grown to more than $2 billion—still tiny compared to the flagship, which ranks as the largest mutual fund with $270 billion. Small funds can trade more nimbly.

For years, advisors have asked Gross whether his flagship had gotten too big.  The PIMCO manager always replied that size was an advantage, not a handicap. The fund’s heft enabled the PIMCO trading desk to get favorable prices when it bought large quantities of bonds, he said.

Maybe so. But could the ETF be excelling because it enjoys PIMCO’s clout and is not saddled with the burdens of managing a gargantuan portfolio?

To appreciate the disadvantages of size, consider that the ETF holds 300 securities, while the mutual fund has 18,000. “For the mutual fund, Gross may have to buy some bonds that are not necessarily his best ideas,” says Paul Baiocchi, an ETF analyst for IndexUniverse.com.

As the ETF grows, it could lose some of its edge, says Morningstar’s Strauts. He figures that the annual return advantage will soon drop down to one percentage point or less. Still, he argues that most investors should prefer the ETF over the flagship portfolio—at least until the two funds have roughly the same size portfolios.  “With the ETF, you are getting a fund run by Bill Gross, and you are getting a smaller portfolio,” Strauts says.

For many retail investors, another reason to prefer the ETF is its low fees. The ETF has an expense ratio of 0.55%, compared to 0.85% for the Class A retail shares. Institutional shares of the mutual fund cost 0.46%.

PIMCO has argued that the two funds will never deliver the same returns because the ETF faces more restrictions. Under the regulations, the ETF is limited in its use of derivatives, while the flagship employs credit default swaps and options. But derivatives have been a burden for the mutual fund recently. Credit default swaps act like insurance policies against bond defaults. An investor pays for the swaps and receives compensation only if trouble appears. Because the bond market has been steady lately, PIMCO has paid for the swaps but received little benefit aside from a feeling of security. Of course, if the action turns violent, the swaps could be valuable and provide an advantage for the mutual fund.

Gross has surprised some doubters who questioned whether any manager could succeed with an actively managed ETF.  The problem is that ETFs must disclose their holdings every day. Skeptics said that the transparency would encourage imitators who could front run Gross, watching his strategy unfold and rushing to implement the moves first. The front runners would drive up prices of bonds before the PIMCO fund could complete its purchases. That would hurt returns.

But Strauts says that front running has not been a problem. For starters, many competing funds have long known what Gross is doing. When PIMCO wants to unload a bond, the trading desk must sell the security to someone else, and both parties know exactly who is at the other end of the phone line. “All the big bond desks know what PIMCO is doing,” says Strauts.

Even when competitors know the trades that Gross makes every day, they have not been able to match the master. It is simply too difficult to copy all the nuances of the complicated trades that PIMCO makes.  Since the ETF began posting all of its holdings daily, no competitor has suddenly risen from obscurity and mimicked the trades.

The stellar results serve as a reminder that Gross is truly in a class of one. No manager ever has stayed at the front ranks of his field for so long. In the late 1990s, Newsweek dubbed Gross ‘“the Peter Lynch of bonds.” But there was a big difference between the two managers. Lynch quit after 13 sensational years at the helm of Fidelity Magellan; Gross has never stopped trading bonds. Under the pressure of media glare, the PIMCO manager keeps making daring calls—and mostly he has been right.

During the 15 years through July, the flagship PIMCO fund returned 7.3% annually, compared to 6.2% for the Barclays index and 5.6% for the average intermediate-term bond fund. Now Gross is 68, and he sometimes peppers his speeches with jokes about his advancing age. But as demonstrated by the ETF version of the flagship, he’s not too old to bring out some new tricks.