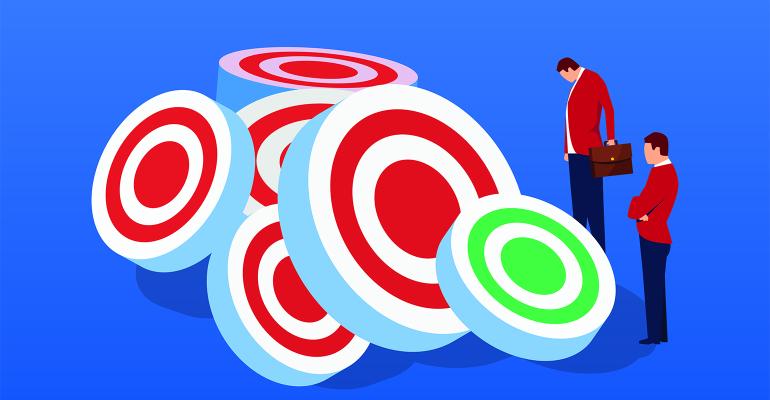 It’s more than returns and alpha. Based on the data, these ETPs should do the best job of easing investor pain in a choppy market.

If we’ve learned anything at all from the recent political tumult, is that words do matter. So, what are we to make of the word “alternative?” A nit-picky lexicologist would likely say that you can have a maximum of two alternatives, because the word derives from the Latin alter, meaning “other (of two).” In modern standard English, however, the word often describes multiple choices.

So it is with investments. There’s no one alternative to the traditional 60/40 mix of equities and fixed-income securities. Choices abound, from commodities to hedge funds, including all manner of long/short strategies. Which, then, are the best alternatives? Not as stand-alone investments, but as to complement a conventional asset allocation.

Why might we need an alternative investment in the first place? We need some yin to balance against our existing portfolio’s yang. While common stocks are generally not well-correlated to bonds, there are times when both asset classes get simultaneously hit. That’s when an alternative ought to keep a drawdown from becoming catastrophic. This is especially important when we head into a period of exceptional instability for both stocks and bonds.

Alternative investment strategies have been around in hedge fund form for many years. Their appearance in exchange-traded wrappers is a more recent phenomenon. Of those exchange-traded products that have survived at least five years, Morningstar credits only a handful of alts with positive alpha. 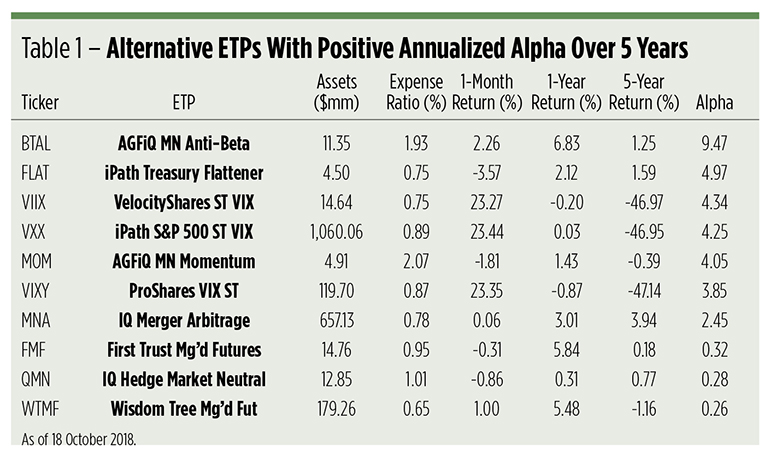 The roster of alpha producers (Table 1) contains a surprise that will undoubtedly leave many investors incredulous. It’s the appearance of ETPs tracking short-term VIX futures—notorious for their big-time losses. VIX, or the Cboe Volatility Index, is the stock market’s so-called “fear gauge.” VIX tends to spike as traders price higher and higher volatility into the index’s underlying S&P 500 option premiums. VIX futures are used mainly by institutional traders to defend against broad market wobbles. These hedges are tactical, not long-term positions.

VIX-tracking ETPs’ reputation as money-losers are well-deserved—in the long term, that is. Evidence of this is found in the 5-year return column. The market values of the VelocityShares Daily Long VIX Short-Term ETN (Nasdaq: VIIX), the iPath S&P 500 Short-Tern Futures ETN (NYSE Arca: VXX) and the ProShares VIX Short-Term Futures ETF (NYSE Arca: VIXY) have all been nearly halved since 2013.

But look at the products’ recent one-month gains—well in excess of a contemporaneous 5 percent loss in the S&P 500.

And therein lies the reason for investor puzzlement. You see, alpha doesn’t measure an investment’s excess return. Not exactly. Instead, it represents an investment’s excess return over (or under) the beta-adjusted market results. In other words, alpha makes an apples-to-apples comparison by asking “How much would the ETP outperform the market if the market was as volatile as the ETP?” VIX-tracking ETPs —all of ‘em—earn negative beta. That’s why they’re hedges: They tend to zig when the market zags. As such, they can be costly when the market’s in a sustained uptrend.

Unless you believe equities are permanently headed southbound (volatility spikes usually coincide with market drops), VIX-tracking ETPs clearly aren’t suitable as core portfolio holdings. That said, which of our other alt ETPs are good candidates for the long term? To answer that question, we first need to know how well the ETPs correlate with other portfolio assets. If we represent the classic 60/40 portfolio to be made up by the Vanguard Total Stock Market ETF (NYSE Arca: VTI) and the Vanguard Total Bond Market ETF (Nasdaq: BND), we see the correlations shown in Table 2.

Correlation coefficients help us decide from what side of our portfolio to carve out an allocation for alt exposure. We can either make room for a 20 percent allocation by taking equal 10 percent slices from both the equity and fixed-income sides, resulting in a 50/30/20 mix or we can optimize the portfolio by taking a bigger chunk from one side or the other to shade exposure in anticipation of future volatility. As an example, a 60/20/20 mix is optimized for higher exposure to stock market risk while a 40/40/20 allocation would gear the portfolio toward lower volatility.

Over the past 5 years, subtracting any exposure to the stock market was bound to have a deleterious effect on portfolio returns. That’s reflected in the results tabulated in Table 3. Gross annual returns for all the alternative portfolios lagged that of the 60/40 mix.

But four portfolios outperformed on a risk-adjusted basis. Portfolios that included the AGFiQ U.S. Market Neutral Anti-Beta ETF (NYSE Arca: BTAL), the IQ Merger Arbitrage ETF (NYSE Arca: MNA), the iPath U.S. Treasury Flattener ETN (Nasdaq: FLAT) and the AFGiQ U.S. Market Neutral Momentum ETF (NYSE Arca: MOM) each earned alpha over that generated by the traditional 60/40 mix. The reason for the superior performance? Volatility control. They may not have made as much as the 60/40 allocation, but they’re more likely to keep what gains they’ve earned during market downturns.

The future trajectory of the iPath FLAT Note might be more uncertain as its alpha power lies in its ability to capitalize upon a flattening of the Treasury yield curve.  An inflationary environment with a steepening curve could erode the ETN’s utility. 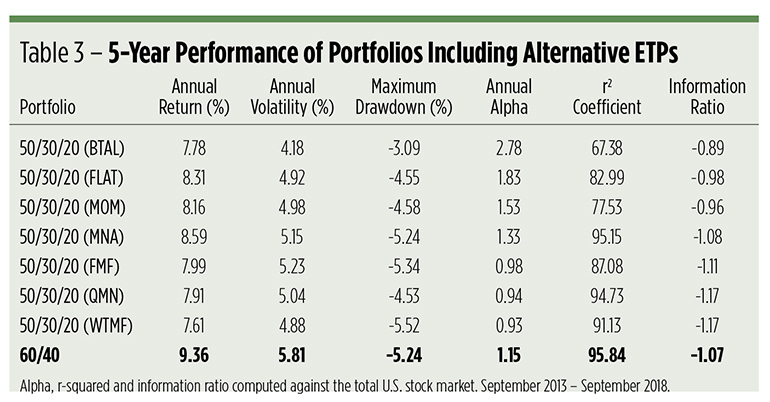 Optimizing the portfolios through carve-outs produces remarkably disparate results, but there are some commonalities. Looking backwards over the course of a bull stock market, returns suffered in nearly every instance in which alts were layered into the asset mix. But, almost universally, volatility was also dampened (see Table 4). 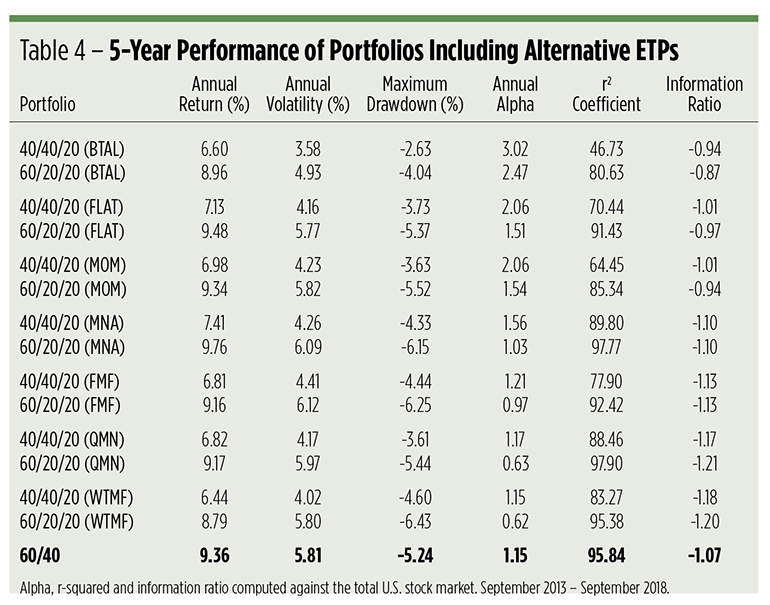 The question investors and their advisors must address is this: Will the next 5-year period look like the last? Or will it be wiser to temper exposure to equity volatility? The decade-old bull market is definitely long in the tooth, so the odds are ticking up in favor of the bear. And when the bear arrives to devour some of the market’s previous gains? That’s when alternatives—true alternatives—will be most beneficial.

So, which alt ETP is likely to offer the biggest benefit? Look to the information ratios in the tables. The ratio measures the excess—or active return—of a portfolio in relation to the tracking error against the benchmark. The more positive (or less negative) the ratio, the better the portfolio.  No matter what allocation is employed—50/30/20, 60/20/20 or 40/40/20—the BTAL anti-beta ETF cranks out the best information ratio of the lot.

BTAL is a long/short fund that buys low beta stocks and sells short high beta issues to get to a market-neutral stance. The impact of adding BTAL to a stock and bond mix is made plain in the maximum drawdown columns. Drawdowns reflect the pain investors suffer as a portfolio falls from its peak to a subsequent bottom. Portfolios containing BTAL have suffered the least.

Going forward, advisors may want to echo the words of Aristotle when talking to clients about alternatives: “The aim of the wise is not to secure pleasure, but to avoid pain.”