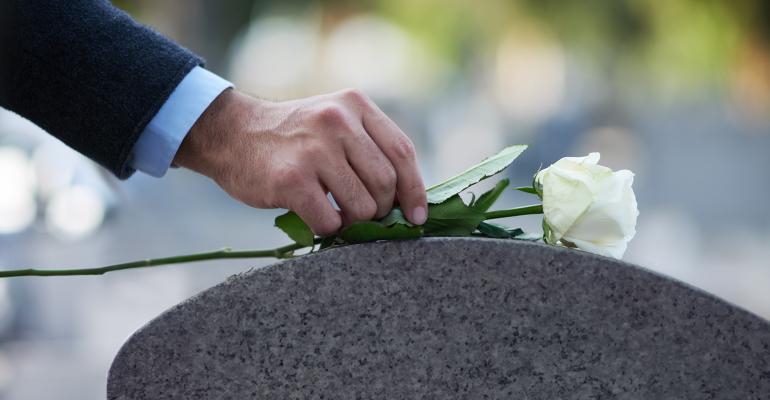 We Need to Talk About End-of-Life Bureaucracy

Estate settlement may take Americans 18 months to finalize and is unnecessarily complex.

When one spends enough time in management, you begin to understand the cost of everything, down to each item on the office fruit plate. Even the most financially literate Americans, however, are completely unprepared for the most inevitable expense of all.

After two years working at the intersection of the financial technology and bereavement industries, I am no less afraid of losing loved ones but now also concerned with the financial and emotional costs of the paperwork left behind. When I think about death, I also think of the administrative burden imposed on those in mourning: weeks of coping with shock and personal anguish, and then months, sometimes years, of onerous tasks for the appointed executor, most often a close relative.

There are hard costs associated with bereavement bureaucracy. We can only estimate the drain on public and private resources, but it is significant, almost certainly in the tens of billions annually. As we hope to demonstrate, deep reforms are needed to ensure we stop wasting people’s precious time on tasks that could easily be automated.

Most working professionals have yet to experience the process of settling a loved one’s estate. They should know that a clear majority of executors report the tasks were among the most difficult they’ve ever been asked to perform in any context, let alone while mourning.

Over the next three decades, American retirees expect to transfer up to $68 trillion of wealth to their families, friends or other beneficiaries. Coupled with an average estate settlement time frame of 18 months, estate settlement is hard on everyone, even those who are detail-oriented or good at math.

While the pandemic-inspired online estate planning boom is generally positive news that will lead to fewer inefficiencies in the justice system, it’s the settlement process that is so woefully mired.

The Hard Costs of Estate Settlement

On average, an estate can expect to pay upwards of $8,500 in fees. This includes lawyers, accountants, probate, notaries and other professionals. That’s if everything goes smoothly from start to finish. If any party decides to dispute the will, then costs only continue to multiply, especially if the dispute leads to a protracted court battle, itself costly for both individuals and government.

If time is money, consider the average 400 hours required for all tasks related to analogue estate settlement, with the fact that about 0.8% of the population in North America dies every year, and the hidden costs related to settling those estates each year amounts to about $15–$16 billion—nearly all of it unproductive time that is taken from us, serving no clear purpose and creating no wealth or even tangential benefits for society at large.

Although it is difficult to avoid being named executor of a loved one’s estate, at an organizational level, we are able to reduce the impact on workforces through bereavement benefits or other wellness plans. It’s more difficult to precisely measure the toll estate settlement takes on the mental health of each survivor.

Grief can be overwhelming. If most people say losing a family member is one of life’s most difficult challenges, why during this time should anyone be expected to perform estate executorship duties that confound even highly trained professionals? In the midst of hundreds of hours of paperwork and managing difficult family dynamics, how can workers be expected to perform with any degree of focus or enthusiasm?

The average bereavement leave for employees is inadequate—typically three to seven days depending on the company. That’s hardly enough to make a dent in the paperwork. Working people in mourning don’t have enough time to heal, and their employers often don’t see the toll that bereavement-induced presenteeism, or working at a reduced capacity, takes on their workforces.

Death and taxes are said to be the most inevitable features of life, but when unsuspecting Americans in the prime of their lives are named as executors in the wake of a family death, dealing with both at once while navigating the bewildering probate process makes for one truly cruel chore.

The enduring taboo around death makes the planning and settlement processes inevitably unappealing; we’ll never be ready for it. And so, especially in times of crisis, it’s time for governments, courts and financial institutions to take a compassionate approach and begin finding efficiencies to eliminate the hidden costs of death that are hurting us all.

Davide Pisanu is co-founder and CEO of ClearEstate, an estate settlement platform founded in 2020. Previously, he was the co-founder of the Montreal-based consultancy Juniper, senior vice president with Cirque du Soleil and a lecturer at McGill University’s Desautels Faculty of Management.