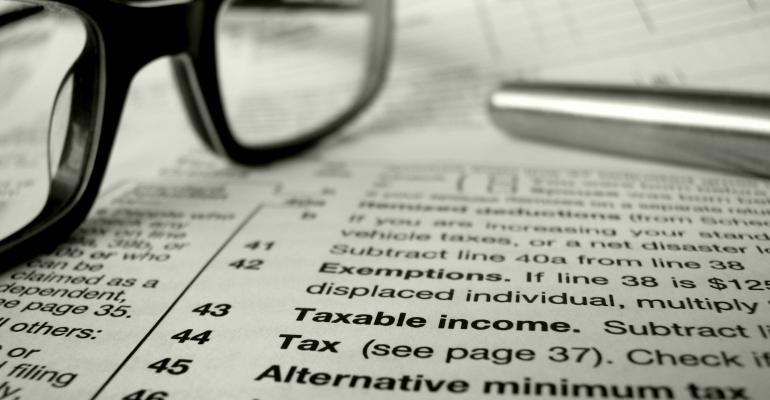 If there’s no shift of beneficial interests to an individual in a lower generation and no additions to the trust post-merger, no GST tax is due

In Private Letter Ruling 201448018 (released Nov. 28, 2014), the Internal Revenue Service ruled that a merger of two identical trusts wouldn’t cause any distributions from the original trust into the surviving trust to be subject to generation-skipping transfer (GST) tax, so long as there weren’t any post-merger additions to the surviving trust.  The merger wouldn’t affect the grandfathered status of the trusts because they were irrevocable as of Sept. 25, 1985—the date on which any trust already in existence is considered irrevocable under Internal Revenue Code Section 1433(b)(2)(A).

A wife created a trust (Trust 1) and died prior to Sept. 26, 1985.  The trust became irrevocable on her death.  The trust provides that net income should be used for her grandchildren, in amounts the trustee deems advisable.  If the trustee makes distributions, he must make payments simultaneously and equally to each living grandchild.  If any grandchild dies, his share must be paid to a person or corporation designated by that grandchild in his will.  Trust 1 contained various other provisions, including how the grandchildren should exercise a special power of appointment (POA), the consequences of invalidly exercising the special POA and how the trustee should distribute undisposed principal.

Trust 1 and Trust 2’s trustees asked the IRS whether a merger of Trust 1 into Trust 2 would subject either Trust 1 or the newly merged Trust 2 to GST tax under IRC Section 2601.  The trustees were concerned that a merger could forfeit Trust 1 and Trust 2’s exempt status that arose from their irrevocable status prior to Sept. 26, 1985—the effective date of Chapter 13 of the IRC.

The state statute relevant to the instant case provided that after notice to the beneficiaries, a trustee could combine trusts into a single trust, if the result doesn’t materially impair the rights of any beneficiary or adversely affect the purposes of the trust.

In this instance, a court approved the merger of Trust 1 and Trust 2 contingent on the IRS issuing a favorable PLR.  The trustees noted that the beneficiaries of both trusts are the same, both before and after the proposed merger, and the trustees made no additions to either trust’s principal after Sept. 25, 1985.

Section 2601 imposes a tax on every GST (taxable distribution, taxable termination and direct skip).  Under IRC Section 1433(b)(2)(A), GST tax doesn’t apply to any GST under a trust that was irrevocable on Sept. 25, 1985.  However, this exemption applies only to the extent such transfer wasn’t made out of corpus added to the trust after Sept. 25, 1985.  Treasury Regulations Section 26.2601-1(b)(4)(i)(D) provides that a modification won’t cause an exempt trust to be subject to GST tax, so long as the modification doesn’t shift a beneficial interest in the trust to any beneficiary who occupies a lower generation than the individual who held the beneficial interest prior to the modification, and the modification doesn’t extend the time for vesting of any beneficial interest in the trust beyond the period provided for in the original trust.

In this instance, the IRS looked to Example 6 of Treas. Regs Section 26.2601-1(b)(4)(i)(D), which described a scenario similar to the one in this case.  In Example 6, a grantor and his spouse set up trusts with identical terms.  A local court approved a merger of both trusts to save administrative costs and enhance investment management: There was no shift in beneficial interests to a lower generation, and the merger didn’t extend the time for vesting of the beneficial interest in the trust beyond the original trust period.

The proposed merger in the instant case involved the same beneficiaries before and after the merger; the same trust termination dates before and after the merger; no shift in beneficial interests to a lower generation beneficiary; and no extension of time for vesting interest in the trusts beyond the period provided for in the original trusts.  Thus, the merger wouldn’t affect the grandfathered status of the trusts.  Accordingly, distributions from Trust 1 or the surviving Trust 2 wouldn’t be subject to GST tax, provided there are no post-merger additions to the surviving Trust 2.