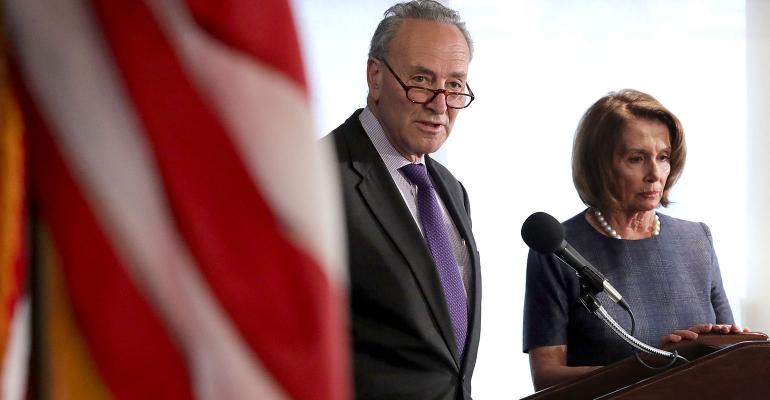 What that could mean for a year-end tax bill.

Last week, President Trump sided with Democrats on a combination of fiscal bills, a move that sent shockwaves through Republicans in Congress.  Nevertheless, Congress passed these bills by wide, bipartisan margins a few days later.

The policy specifics around these bills are less important than the political signal sent by Trump. He’s open for business with Democrats. Also noteworthy is that by passing these bills, which expire on December 15, Congress has created a deadline for a tantalizing, must-pass package that he can tag tax reform on to. Why tantalizing? The package of bills would offer Democrats a win in more social spending while offering a big tax bill for Republicans. A final draw? Maybe more disaster relief for victims and towns impacted by hurricanes Harvey and Irma.

So what’s the practical significance of Trump's working with Democrats? Plenty.

As for some hard-to-pin-down Republicans, they’re definitely losing sleep.  Before the Trump/Democrats thawing, these Republicans were the belles of the ball. They called the shots, and the White House listened. Now that Trump could get votes elsewhere, Republicans have to be worried about their leverage.

Perhaps the most meaningful significance of Chuck Schumer (D-NY) and Trump becoming bros is that the country just may get a durable, bipartisan tax bill. The business community knows all too well what you get with something less. They don’t want a rerun of the aftermath of the Affordable Care Act (ACA), a bill that not one Republican voted for. That gave us seven years of uncertainty as members of Congress tried to roll back, remake, repeal and replace a bill that affects such a big portion of our economy.

On July 27, the White House, Senate and House issued a joint statement on tax reform that was long on economic growth being the goal but short on specifics.

Then members of Congress left for the August recess while staff stayed behind to continue ironing out those yet-to-be-revealed details.

But more is coming. Soon.

A few days ago, Chair Kevin Brady (R-TX) told Congressional Republicans to expect more details on a tax-reform framework on or around September 25. This timing coincides with a retreat of the GOP members of his tax-writing committee. The same timing was echoed by the White House. So they may really mean it this time.

And the Senate’s tax-writing committee this week began a series of hearings to help bring closure to some of tax reform’s stickiest provisions.

That sets up October to be the month for House and Senate tax-writing committee staff to finalize their respective tax-reform bills. Those committees will then hold markups to allow for Democratic and Republican committee members to amend those bills, and then the bills go to the floor of each chamber for further amendments by the larger bodies. Once each chamber passes its bill, there’s a blending of the bills and a final vote by each chamber on that blended bill (known as a conference bill). This is “regular order,” and what was missing from the failed ACA repeal/replace efforts.

Up until recently, the conventional wisdom was that Republicans were so rabid about passing a major reform package, and the Democrats so eager to not let them have any victories, that a tax bill would be a partisan bill. But the olive branch appears to have, at least for now, hit the reset button on that.

Two things to ponder. How long will the #resist folks stay quiet on this détente, and what will trigger their ire? Surely eyes rolled when they read about Schumer’s hot mic moment: “He likes us. He likes me, anyway.”

Tax reform isn’t a process for the weak-kneed. The 1986 tax-reform bill came together only after several failed attempts. But each time, members and the administration returned to the table until they got a deal. This time is no different except that the president is playing by his own rules, and for now those rules include some Democrats.