Delaware positioned itself as a favorable place for setting up different kinds of financial arrangements. Many corporations and businesses are incorporated in the First State despite having no relationship to it. Delaware ranked in the top three for all three metrics. There are more than 50 trusts per 1,000 households in Delaware, and the average trust has an income just under $185,100.

Not as many trusts are set up in South Dakota as in Delaware, but the ones that are set up here are large. The average trust in South Dakota has an income just short of $262,000. At the same time, the average trust has deductions worth more than $103,000. In both metrics, South Dakota ranks first. South Dakota also has a long history of being friendly to trusts. It was one of the first states to allow trusts to exist in perpetuity. One reason people may choose South Dakota to set up a trust is that the state doesn’t have additional state income or capital gains taxes for assets in trusts.

Because Wyoming has no additional estate or income taxes, it’s an ideal place to set up a trust. There are more than 28 trusts per 1,000 households, the eighth most in the study. On average, these trusts have an income of $145,651. Trusts in Wyoming are also able to deduct a large amount of taxes. The average trust in Wyoming has deductions worth $73,100, the fifth-highest amount in our study.

There are more than 189,000 trusts set up in Illinois, one of the highest numbers in the country. Illinois has a fairly high progressive estate tax, only taxing estates worth more than $4 million. That may make it worthwhile to set up a trust in Illinois. Though trusts are common here, the average trust is on the smaller side for this Top 10. Illinois ranks 11th and 15th for income per trust and deductions per trust, respectively.

New York is another state with a progressive estate tax, ranging from 3.06 percent to 16 percent, based on the size of the estate. New York has no additional inheritance tax, so the heir of an estate has to pay no additional taxes after the estate pays the estate taxes. New York trusts are larger than in most states. In both income per trust and deductions per trust, New York ranks in the Top 10.

Washington, D.C. is another locale with an estate tax. The average trust here has an income just greater than $69,000 and average deductions of $43,271: two Top-10 scores. The nation’s capital falls behind other states ranked above because of the lack of trusts relative to its population. Washington, D.C. has just 20.9 trusts per 1,000 households.

Trusts in New Hampshire are somewhat large on average. According to IRS data, the average trust in New Hampshire has an annual income just shy of $100,000. Despite their size, trusts don’t garner much in the way of a tax deduction here. The average deduction for trusts in this state is $27,760, the majority of which comes from taxes paid and fiduciary fees.

Because it has no estate tax or additional income tax, Nevada is a great place to set up a trust. Trusts that are set up in Nevada tend to be large. The average estate here has an income above $149,100 and deductions worth $80,350. In both of those metrics, Nevada ranks third. The reason Nevada falls to ninth is the relatively low number of trusts in the Silver State. Nevada ranks 36th for trusts per 1,000 households.

Finally, our list of the states using trusts the most is Texas. This state has almost 19 trusts per 1,000 households, a fairly low mark. But, on average, trusts here are pretty large. The average trust in Texas has an income greater than $82,600, with average deductions worth just less than $42,000. In those two metrics, Texas ranks in the Top 10. 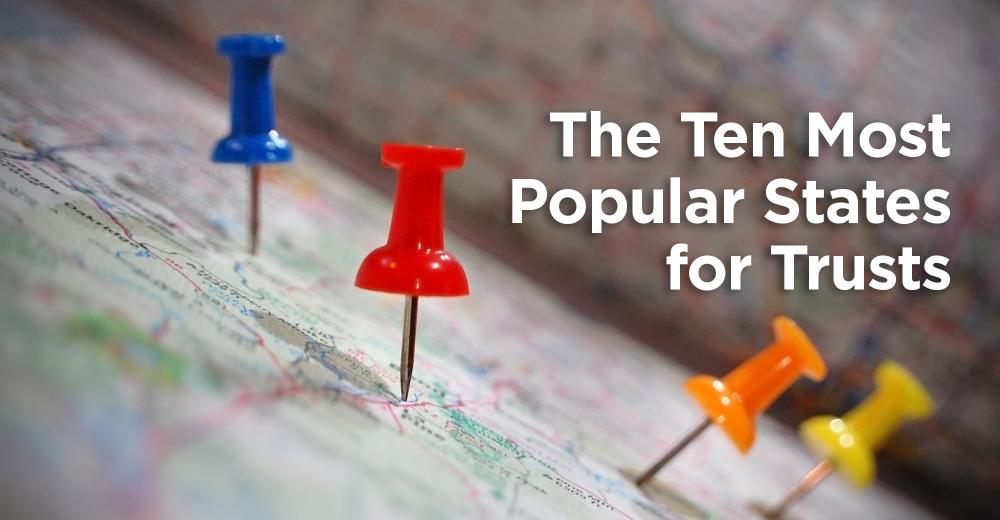 Next Up
The Top Estate Planning Story of 2021: Estate Tax Implications from a Democratic President and Congress
Start Slideshow ›