Between Marcia, Tom and the loveably moronic (yet surprisingly capable) cousin Greg, Succession’s central conflict over Logan’s estate features a large number of key players whose last name notably isn’t Roy. And that’s without mentioning the various Waystar employees involved (with whom Logan has spent far more time than his children anyway).

In our modern, increasingly interconnected lives, the term “family” is less useful as a descriptor. As the “traditional” nuclear family becomes the minority, family has taken on a nebulous meaning that vacillates wildly depending on the individual. Between divorce, remarriage, children out of wedlock, adoption and ever-increasing longevity, today’s families can become complexly blended entities. And that’s even before considering concepts like “chosen families” (particularly relevant in the LBGTQ+ community). This new reality casts a harsh spotlight on the dated concept of blood being what keeps a family together (which was never really true anyway).

The inherent distrust shared between the Roy children and their stepmother Marcia is palpable from their very first interactions. Kids hating their stepmom is one of the oldest clichés in the book, but it does exist for a reason. A huge number of family conflicts can be broken down to the basic element of “I don’t get along with my step-parent/sibling/child.”

This reality strikes to the primary planning problem presented by today’s increasingly blended families—they’re complex webs of people who are often only connected through a single individual. While that individual is alive, it gives these relationships a tangible reason to exist and remain outwardly civil. However, when that person dies, and that single locus of connection is instantly removed, then all of those relationships must redefine themselves. Conflict is inevitable.

Logan’s life is ultimately the prototypical immigrant “American Dream” success story. He’s an Scottish immigrant who came to the United States with nothing and through hard work, sheer will and ruthlessness built a massive fortune for himself. I’m willing to bet that most readers have several clients who fit that description (maybe replacing “massive fortune” with “successful business”).

The irony of many first-generation wealth creators is that they’re often their own worst enemies when it comes to estate planning. They’ve devoted their lives to creating a family business, but over the years, having spent far more time in the business than with their families, it becomes the more important portion of the equation for them (whether they realize it or not). This is a particularly difficult row to hoe for advisors, as its often the wealth creator that’s their client, and explaining to them that they’re part of the problem can be relationship altering if not done carefully. However, it’s imperative to have the conversation because. …

Succession does a really great job hammering this one home. It constantly presents contrasting images of Logan being a fiery and capable CEO, raging in the boardroom, aptly deflecting his children’s inept challenges and sparring with the President of the United States with scenes of him frail and tottering, getting lost and spacing out. Heck, the opening show is him waking up in the middle of the night, not knowing where he is and peeing in the hall.

Even though a client may think they’re the only one that could possibly run their business, the reality is that time is undefeated, and although they may still be capable right now, who’s to say what things will look like in a few months or years? And by the time questions of competence start to arise, it’s often too late to address them, as you’re faced with a physically or mentally compromised client, and any potential solution is left open to an easy legal challenge based on incompetence and undue influence.

Logan seems to realize from the first episode of the show that none of his kids are right to run the business, but he can never quite bring himself to abandon his fantasy of passing it on to them. This indecision leads to a lot of broken promises and giving and taking of power and positions among Logan’s children that only serve to further foment fighting (and make Logan look less competent in his decision making generally).

The truth is that there are numerous ways to keep a business under family control and keep family members involved throughout the business itself without just making one of them CEO. Outside CEOs are an increasingly popular, and generally a far more competent alternative than simply handing the reigns over to whichever kid happens to have worked for Mom the longest. Additionally, business adjacent options, like philanthropy, can offer family members a way to stay involved in the family business while still pursuing causes they’re passionate about.

6. The Strength of Healthcare Proxies and Powers of Attorney

As a planning nerd, one of my favorite moments of season 1 is how easily and completely Marcia is able to step in and assume control over Logan’s care, wellbeing and person in the wake of his sudden illness because of her status as his spouse and because she has power of attorney. Regardless of her motives, this massive flex of the usefulness of having end of life documents that go into effect before death, like living wills, healthcare proxies and powers of attorney, is refreshing to behold. Normally in shows like this, and consequently in the minds of clients, a will is held up as the end-all-be-all planning document. The reality is that end-of-life planning documents often tend to be more powerful and relevant. I’ve had some estate planning attorney colleagues joke with me that the old-time price structure of charging clients for a will and then throwing in these sorts of planning documents to sweeten the deal, should really be the other way around.

7. Surprises Are What Cause Fights

As Succession opens, there’s an uneasy detente between the Roy children. Kendall is set to take over the business, while Shiv and Roman are the beneficiaries of a trust while they pursue their own interests. They’re all okay with this plan. Yet, the second Logan publicly second guesses naming Kendall as successor, all hell breaks loose. Suddenly, Roman and Shiv want bigger pieces of the pie and Kendall is left scorned by his father and confused why his siblings are suddenly circling like sharks, setting up our central conflict.

To paraphrase the Joker—people tend to remain calm when everything is going to plan, no matter how horrible that plan may be. While this bit of psychotic wisdom isn’t always accurate, it’s important to realize that many estate-planning fights are heavily based in emotion. All involved have suffered a recent traumatic loss or are facing down the reality of one and are now expected to push through that fog and make calculated business decisions. In this context, surprise is basically never welcome.

One of the constant internal refrains of Succession viewers is why Roman and Shiv want control of the company so bad anyway? Neither seem to have any real interest in being involved, made obvious by Roman’s ridiculous executive cosplay (and his obvious contempt for the whole endeavor) and Shiv’s clear preference for the world of politics. They’d get the same money from the trust either way without any of the responsibility they never seemed to want in the first place. What the heck?

The answer ultimately doesn’t matter. Family estate-planning fights are often completely irrational and are far less often centered on money than one would initially assume. The parties may not have ever known they cared about some central aspect of a conflict until the moment it came up. The number of conflicts where money questions are swiftly resolved and the main sticking point is who gets Dad’s old baseball mitt or Mom’s favorite chair—neither of which any of the kids had ever expressed any interest in previously­­—is shocking. It all comes back to emotions and ultimately, trauma.

9. Sometimes a Fight Is Inevitable

Logan Roy had a robust estate plan in place, featuring a prominent trust for the benefit of his children, charitable concerns and end of life documentation. Yet we’re sitting here talking about a show centered around how much of a disaster the ongoing fight over his estate is. What a failure on the part of the plan right?

Not necessarily. Though a thorough estate plan often does have a prophylactic effect in terms of preventing fights before they start (even the Roys seemed content until Logan started messing with the plan), that a fight breaks out does not necessarily render the plan itself a failure. It’s the length and severity of that fight that should be the ultimate judge.

Ultimately, the best way to get ahead of an estate conflict is to be as open as possible let it break out while everyone is still alive. There’s no way to defray the surprise and hurt inherent in some estate planning decisions. “I’m choosing your sister to run the business over you” feels bad no matter when you hear it. However, the fallout from that decision is far different when Mom is there to explain why she made it than when the news is delivered by an attorney after the funeral and emotions are left to fester with no explanation at all.

So often, estate fights break down into siblings arguing conflicting versions of “what Mom would have wanted” based largely on the party’s individual, self-interested and idealized memories of their parent. The best way to deal with this inevitable fight is for Mom to still be around to tell you what she wanted.

That’s why it's ironic that Succession’s central fight is ignited by Logan being open with his kids during his life about wanting to change his plan. In light of the insanity that’s broken out in the two seasons since, it’s crazy to think about how bad things would get if he hadn’t told anyone until after his death. The ridiculous family fight in Succession somehow may have been much morse. 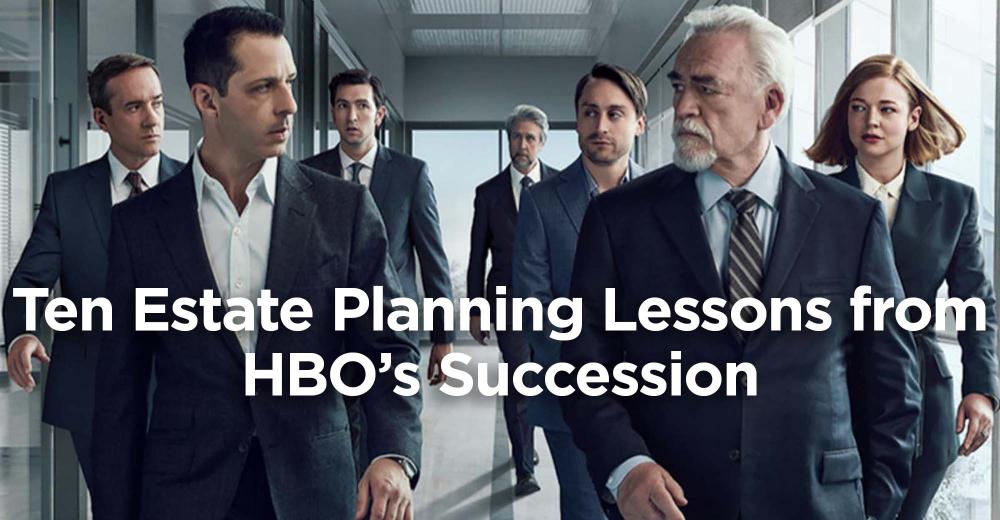 Next Up
How Smart Are You About the Annual and Lifetime Gift Tax Exclusions?
Start Slideshow ›