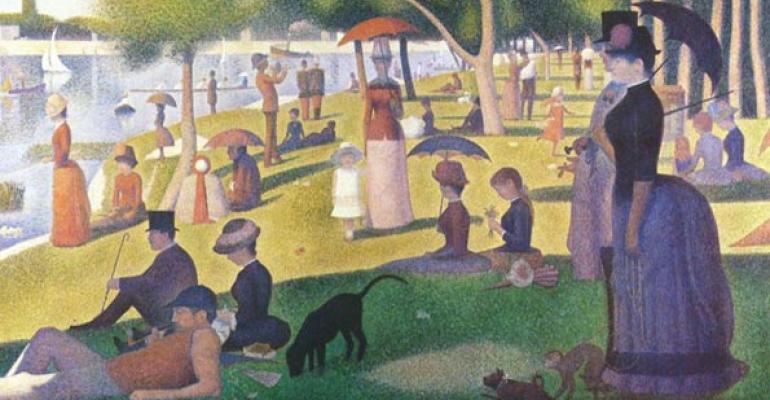 From Seurat to Starbucks

A meditation on connection, communication and trusts…

A Sunday Afternoon on the Island of La Grande Jatte is perhaps renowned French artist Georges Seurat’s most famous work.  Painted in 1884, the masterpiece portrays members of French society gathered in a bucolic park on the banks of the Seine.

According to Stephen Sondheim in the HBO documentary film Six by Sondheim, the painting was the inspiration for the 1984 Broadway musical Sunday in the Park with George, for which Sondheim wrote the music and lyrics.

In that HBO film, Sondheim says he noticed that none of the people in Seurat’s canvas were looking at one another.  And the idea for the play crystallized in his mind when it was pointed out to him that, although present, the one major figure missing from the painting was the artist himself.

From the banks of the Seine to the family office: Although his presence is felt strongly, the trust-creator is often missing from a trust’s “canvas”—because the trust is having nearly all of its real-world impact after his death.  And, too often, those touched by the trust end up, metaphorically, not looking at one another.

Contrast Seurat’s Sunday in the Park with the scene at my local Starbucks one morning in April.  I look out the window and see two people sharing a table on the patio.  They’re the only ones sitting outside—we had several inches of snow two days prior, yesterday it melted and today is still somewhat cool.  He’s looking clean-cut in jeans and faded blue t-shirt sporting a logo not familiar to me.  Her back is to me (I never saw her face) wearing a belted brown leather coat and red shoulder bag, mid-shoulder length straight brown hair.

Is this life imitating art, or at least a coffee shop offering itself as an art gallery? In any case, the two are perfectly   “framed” by the window.

Now for the magic.  In the 10 minutes that I’ve watched them on and off, they’ve never deviated from a dance of attuned communication.

I have no idea what they’ve been talking about and don’t know whether they’re lovers, friends or business colleagues.  But the eye contact is nearly constant.  He’s smiling and gesticulating with his Starbucks paper cup to make a point.  She’s listening—then responding in a like manner.  The two leaning forward and back in unison.  Neither speaks over the other; neither speaks more than the other.  They’re a delight to watch...

Like the Starbucks couple, those touched by a trust are sometimes close, in a way that becomes  “communication” in the best sense of the word.  From Seurat to Starbucks and everything in between—there’s no shortage of complex emotional interplay among those interconnected by a trust.

Five years ago, I coined the term “trustscape” to describe the totality and whole picture of individuals connected by a given trust—trust-creators, trustees, beneficiaries, trust protectors, trust committees and all of their respective advisors.  It can even extend to the tutor of the 13-year-old whose mom suddenly has disposable income.

The trustscape includes many who are related by blood, and others who aren’t.  And, of course, there are time lapses and geographical spaces that complicate matters well beyond our intense Starbucks scene.

The trustscape metaphor has similarities to a seascape.  On the surface and below, both have currents and crosscurrents.  Some days are sunny and offer clear sailing.  On other days, fog may roll in and squalls unexpectedly arise. Navigating either scape may at times be enchanting and at other times hazardous.

An inexperienced sailor might be able to navigate a placid lake in good weather without getting into too much trouble.  When contemplating venturing out to sea, however, the inexperienced sailor would be well advised to first acquire education and experience—or, at a minimum, arrange to bring along an able sailor.

Similarly, the beneficiary must understand how to navigate his own unique trustscape. Doing so will raise that beneficiary’s confidence and put them in a better position to form a productive partnership with the trustee.  The trustee may at times serve as the beneficiary’s able sailor.

No telling how long even the most able sailors may take to navigate from Seurat to Starbucks, or ports along the way.

So in the column “Canisters, Casseroles and Context” that appeared here in May 2013, navigation from conflict to concord took a matter of weeks.  In TrustWorthy’s “From Flawed History to a Fresh Start,” the journey unfolded over a period of months.  And in “I am Me, Not One of Eight,” also from my book with Kathy Wiseman, the voyage to a safe port took place over a couple of years.

On land or sea, clear vision is vital, even as key roles change hands.  At times a beneficiary, at times a trustee and at times an advisor will be called on to assume the navigator’s role. And quite often, a positive story may serve as the North Star.

Hartley Goldstone is founder of Trustscape LLC. He can be reached at [email protected].