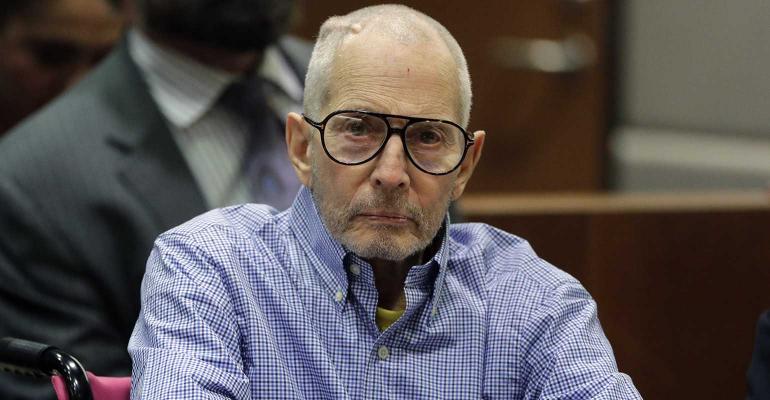 What happens to the convicted murderer's fortune?

The death of a convicted murderer usually doesn’t warrant much public attention, but the death of Robert Durst this week garnered a bit of media frenzy due to his unusual background—a potential serial killer who also happens to be a real estate heir. It’s not often we see murderers who happen to be multimillionaires.

Durst’s saga began in January 1982, when his wife Kathie Durst, a medical student at the time, suddenly disappeared. Although Durst admitted to having had marital issues with Kathie, he remained adamant over the years that he had nothing to do with her disappearance, and although she was officially declared legally deceased in 2017, her remains have never been found.

In December 2000, Durst’s best friend and confidant, Susan Berman, was found shot point-blank in the back of her head at her Los Angeles home. Though Durst wasn’t initially a suspect, he was sentenced to life in prison without chance of parole in October 2021 for her murder. Prior to her death, Berman was allegedly planning to tell police that she provided a phony alibi for Durst relating to his whereabouts at the time of Kathie’s murder.

As if that wasn’t complicated enough, Durst also killed and chopped up his neighbor in Galveston, Texas, in 2001 but was acquitted of murder charges after testifying that it was in self-defense.

The Jinx, an HBO documentary chronicling Durst's involvement in the three cases, helped prosecutors convict Durst in Berman’s murder after his apparent "confession" that he "killed them all," via a hot mic while in the bathroom following an incriminating interview for the show’s finale.

Durst was facing charges in Kathie Durst’s death in a reopened cold case at the time of his death this week.

What Happens to Durst’s Fortune

The big question of course is, what happens to the estate of a criminal?

Born into a wealthy Westchester, New York, family, Durst was the son of New York real estate tycoon Seymour Durst and brother of Douglas Durst—the latter of whose current portfolio includes One World Trade. Given his criminal record, Durst agreed to give up any claims to his family trust and reached a settlement agreement of an estimated $100 million, according to his attorney. Durst was apparently still married to his second wife, Debrah Lee Charatan, at the time of his death. He had no children.

“When it comes to distribution of a deceased person’s assets, there are no special rules for criminals like Durst. Anyone with a financial claim against Durst has one year from his date of death to come forward and seek payment from his estate,” said Benazeer “Benny” Roshan, chair of Greenberg Glusker's trusts and probate litigation group in Los Angeles. “We may see claims from the families of Durst’s victims, anyone with whom Durst had business dealings, or even from Durst’s own family members,” she continued.

“Given the staggering size of Durst’s estate and all of the gruesome harm Durst caused during his lifetime, we may (and should) expect to see some large claims filed in his estate. It will be up to Durst’s personal representative to settle or litigate these claims which may take several years. Once all of the claims are resolved, any residuary funds in Durst’s estate will be distributed in accordance with his expressed wishes,” she added.