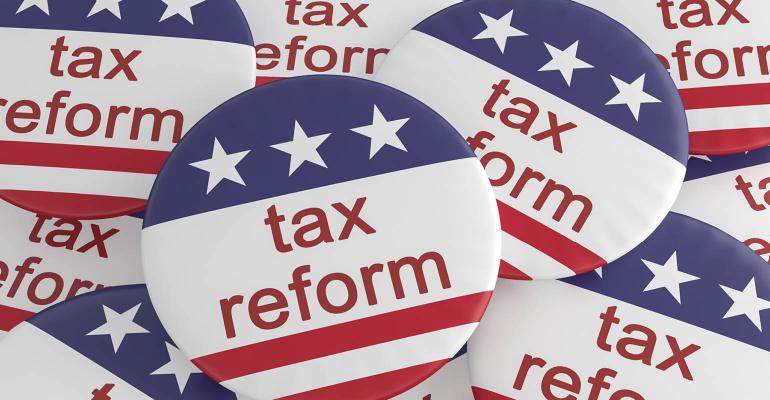 An analysis of the various scenarios and how they could affect charitable giving.

The Republican-controlled Congress is attempting to pass a generational reform of the Internal Revenue Code of 1986 in the amount of time the House Ways and Means Committee (Ways and Means) of the 99th U.S. Congress needed to vote out a bill for consideration by the full House.1 In addition to the hurdle of time, there’s the hurdle of persuading the broad public. Congress and President Trump will need to argue convincingly that lower marginal corporate tax rates will benefit not only shareholders and consumers but also workers. The economic research on the allocation of the burden of the corporate tax among labor, capital and consumers is unclear.2

The Tax Reform Act of 1986 achieved revenue neutrality by raising taxes on corporations to finance individual tax cuts.3 “Congress found it unjustifiable that under prior law some corporations reported large earnings and paid significant dividends to their shareholders, yet paid little or no taxes to the government.”4 The equity or fairness issue isn’t a consideration for this go round on tax reform, notwithstanding that very few corporations pay the 5 percent corporate statutory rate. An analysis of taxes paid by Fortune 500 companies between 2008 and 2015 showed 18 companies paid no income taxes over the entire period; 258 corporations paid an average rate of 21.2 percent.5

The cost of revenue neutrality on this round of tax reform will either be tax increases on individuals or temporary tax reform. With the evaporation of the revenue stream from the border adjustment levy, either the goal of revenue neutrality will be achieved by raising taxes on the highest income taxpayers, or additional deficits will be accepted as part of a mid-December extension on the debt limit.

The Tyranny of the Numbers

Full expensing of capital expenditures coupled with lowering the top corporate rate of 35 percent, while laudable, is extremely expensive. According to the Tax Foundation, the cost of a top rate of 25 percent and full expensing would be between $1.2 trillion and $2.8 trillion.6 Lowering the top rate alone would cost between $449 billion and $1.085 trillion.7 Until Ways and Means votes a bill out of Committee, recommendations about year-end tax planning require an educated guess.

One needs to know the cost of sought-after reforms to predict what provisions are vulnerable to repeal. Raising the revenue for individual and corporate rate reductions isn’t as easy as repealing the most expensive tax preference. For example, eliminating the exclusion of employer-sponsored health insurance would raise $3.1 trillion to $3.4 trillion,8 providing not only the replacement revenue from the repeal of the net investment income tax (NIIT) but also finance corporate rate cuts. Of course, that repeal is a nonstarter for this Congress as its predecessors delayed the effective tax of the Cadillac tax on high benefit plans. Eliminating the charitable contribution would raise about $665 billion to $692 billion,9 but Congress is moving in the direction of preserving or maybe even expanding the deduction.

Could there be less drastic approaches than complete elimination of a deduction, perhaps a limit by dollar amount or marginal tax rate? A limit on the total value of itemized deductions at a fixed amount could raise around $1.9 trillion if the ceiling were set at $25,000.10 Another limit could be based on a marginal rate of 28 percent, meaning those in the 39.6 percent bracket have their taxes increase by 11.6 percent of the charitable contribution. This approach would raise between $217 billion to $301 billion.11

Probably the biggest bargaining chip the Trump administration and Republican Congress have is repeal of the deduction for state and local income and property taxes. Not only does it raise meaningful revenue, but also it has the political advantage for the majority party of being paid by the “high tax” blue states of New York, Connecticut, New Jersey, Massachusetts, Illinois and California.

Here are the likely provisions to be part of a comprehensive or limited reform of the Tax Code and how they’ll affect giving.

Repeal of the alternative minimum tax (AMT). If the reform legislation eliminates the deduction for state and local income and property taxes, the lost revenue will be diminished. Taxpayers who itemize with the state tax or miscellaneous itemized deductions are the most likely to pay it.12 Were that deduction retained, the revenue losses from the repeal of the AMT would be between $354 billion and $428 billion.13

The removal of the AMT enhances transparency and ease of determining one’s marginal rate and thus increases the savings from charitable contributions. Depending on the finalized rates on taxable income, the cost of charitable giving could decline if the new rates are less than any of the applicable AMT rates of 26 percent, 28 percent, 32.5 percent or 35 percent.

No longer will the donor’s advisor need to determine whether the AMT position is either permanent or temporary because of some outlier income inclusions or deductions.

Repeal of the NIIT. To the surprise of many, the NIIT is still standing. The last serious attempt for its repeal will be the tax reform legislation. Its repeal would cost between $444 billion and $628 billion over 10 years and improve the after-tax income of the top 1 percent between 2.7 percent and 3.4 percent.14 Because this group contains the most generous givers, more giving might be possible even if their marginal tax rates on capital income decline.

Introduction of the above-the-line charitable deduction subject to a floor. Dramatically increased standard deductions will eliminate the need for most taxpayers to itemize deductions. A floor based on a percentage of adjusted gross income (AGI) also has potential to reduce charitable giving. A reduction in the top marginal rate from 39.6 percent to 35 percent increased the cost of charitable giving from $60.4/$100 contribution to $65/$100 contribution, an increase of 7.6 percent.

The reduction in charitable giving with a 2 percent floor is significant but borne most by those with income under $1 million because they give 2 percent of AGI. (See “Impact of 2 Percent AGI Floor,” this page.) Even incomes at the $1 million to $1.5 million range would be dramatically reduced. The least impact would be on those with income greater than $10 million. An additional uncertainty about a tax reform bill is its effective date. Will it be retroactive to Jan. 1, 2017? Retroactivity is politically attractive for the legislators, as taxpayers will be seeing their refunds when filing in April 2018 before the primary and general election cycles. If retroactive, any reductions on marginal tax rates make charitable and other itemized deductions more expensive than contemplated by the donors when they made their gift.

What if the effective date is in 2018? There will be a likely frenzy of year-end giving to take advantage of the current law and avoid the impact of likely restrictions on giving imposed by a floor based on AGI and lower marginal tax rates.

A Default Reform on the Horizon?

The entrenched beneficiaries under the IRC often protected by bipartisan support create the political momentum toward greater, not less, complexity. Losers under any reform are often quickly identified; winners may either not be readily identified or be skeptical of their improved fortunes. It took Congress only four years to raise marginal rates after the Tax Reform Act of 1986. Skepticism about the durability of any reform is appropriate. Any enacted legislation branded as “reform” will be more about tax cuts, though some groups may well be paying more.

The revenue needed to provide dramatic corporate income tax rate reductions ultimately will need to come from a new source in a future Congress. What was so intriguing about the border adjustment tax was its originality and impressive revenue potential. Unfortunately, the difficulty in clearly explaining its operation and the lack of a track record in predicting price rises doomed it from serious legislative consideration.

The impressive revenue-raising potential of a 5 percent value added tax (VAT) estimated to be between $5.8 billion to $6.2 billion over a 10-year period could finance much of the corporate rate reductions as well as expensing of capital expenditures.16 Former Treasury Secretary and later Harvard University President Larry Summers once quipped that a VAT will be enacted once Democrats accept its regressivity as the price of access to a vast source of revenue. Republicans will accept its revenue potential as the price of making the tax system more regressive.17

16. Tax Foundation, supra note 6, at p. 91 on revenue raising potential of 5 percent value-added tax without large exemptions for sectors of the economy such as healthcare and nonprofits.