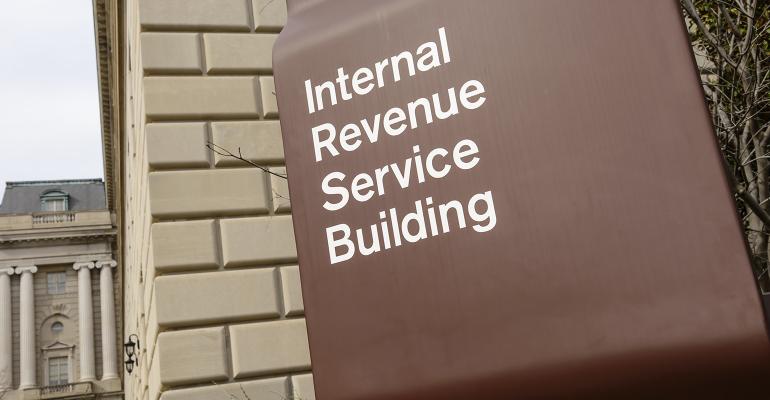 IRA assets could be distributed based on oldest beneficiary’s life expectancy.

In Private Letter Ruling 202035010 (released Aug. 28, 2020), the Internal Revenue Service ruled that the surviving trust in a post-death merger of two trusts, which held the proceeds of a decedent's individual retirement accounts that were transferred to it pursuant to such merger, qualified as a “see-through” (or conduit) trust under Treasury Regulations Section 1.401(a)(9)-4, Q&A-5 and that the assets of such IRAs could, therefore, be distributed to the trust’s beneficiaries based on its oldest beneficiary’s remaining life expectancy.  Although there’s little in the PLR to indicate what motivated the post-death merger of the two trusts, it at least serves as an example of one type of post-death planning that may be accomplished when an irrevocable inter vivos trust has outlived its useful life or is no longer central to a decedent’s planning goals in light of changes in the law or otherwise.

Decedent died in Year 1 before attaining age 70½ and hadn’t begun taking the required minimum distributions (RMDs) from the IRAs. On a date prior to Sept. 30 of the year following the year of the decedent’s death, an agreement was entered into and carried out that called for the merger of Trust B—the one holding the two IRAs—into Trust A, the trust agreement for the latter of which included provisions that weren’t included in Trust B.  More specifically, the “unique” provisions in Trust A enabled its trustees to change the rights of the beneficiaries, D, E and F (decedent’s three children) with respect to Trust A’s assets after the decedent’s death.  The trustees of Trust A provided copies of Trust A, Trust B and the merger agreement to the custodian of the IRAs prior to Oct. 31 of the year following the decedent’s death, as required under the timeliness requirement of Treas. Regs. Section 1.401(a)(9)-4, Q&A-5(b)(4).

Under the merger agreement, Trust A (the surviving trust) assumed all of Trust B’s assets subject to its liabilities. Hence, it was represented that Trust A’s trustees had no discretion post-merger to alter any rights regarding the assets it received from Trust B, including any changes with respect to the beneficiaries of the IRAs. Accordingly, it was represented that Trust A’s provisions didn’t affect the rights of the beneficiaries of Trust B to the assets of the IRAs as of the date of decedent’s death.

Based on the facts as stated, the parties sought a ruling that the requirements of Treas. Regs. Section 1.401(a)(9)-4, Q&A-5 were satisfied so that the assets of the two IRAs could be distributed to Trust A’s beneficiaries based on the remaining life expectancy of Trust A’s oldest beneficiary.

IRC Section 401(a)(9)(A) provides, in general, that a trust won’t be considered qualified unless the plan provides that the entire interest of each employee will be distributed:

However, when an employee dies before the distribution of the employee’s interest has begun—as was the case here—the 5-year rule of IRC Section 401(a)(9)(B)(ii) typically requires that the employee’s entire interest be distributed out within five years after such employee’s death.  But an exception to the 5-year rule exists under Section 401(a)(9)(B)(iii) that may be relied on whenever: (1) any portion of the interest is payable to, or for the benefit of, a designated beneficiary; (2) such portion will be distributed over such designated beneficiary’s lifetime (or over a period not extending beyond such period); and (3) such distributions will begin no later than one year after the employee’s date of death (or such later date as may be prescribed in the Treasury Regulations).

Treas. Regs. Section 1.401(a)(9)-4, Q&A-5(a) provides that if the requirements under Treas. Regs. 1.401(a)(9)-4, Q&A-5(b) are met with respect to a trust that’s designated as beneficiary under a plan, then the trust’s beneficiaries (and not the trust itself) will be treated as having been designated as beneficiaries of the employee for purposes of determining the distribution period under Section 401(a)(9).  That is, the trust relationship will essentially be ignored, or “looked through,” thus allowing us to use the oldest beneficiary’s remaining life expectancy when calculating the RMDs (hence why these trusts are sometimes called “see-through” trusts).

Treas. Regs. Section 1.401(a)(9)-4, Q&A-5(b) provides that the following requirements must be met to “stretch” the RMDs based on the life expectancy of the trust’s eldest beneficiary:

For purposes of item (4), the relevant documentation may be a copy of the trust agreement for the trust named as the employee’s beneficiary under the plan as of the employee’s date of death.  This element was clearly satisfied under the representations set forth in the ruling request, as was also true of items (1) and (2).  Hence, the only question truly remaining for determination was whether the beneficiaries of the decedent’s two IRAs were “identifiable” within the meaning of Treas. Regs. 1.401(a)(9)-4, Q&A-1 and Section 1.401(a)(9)-4, Q&A-5(b)(3).

Stephen Putnoki-Higgins is a tax, trusts, estates, and probate attorney in the corporate practice group at Bailey & Glasser LLP, in St. Petersburg, Fla., and is admitted to practice in Connecticut, Florida and New York.