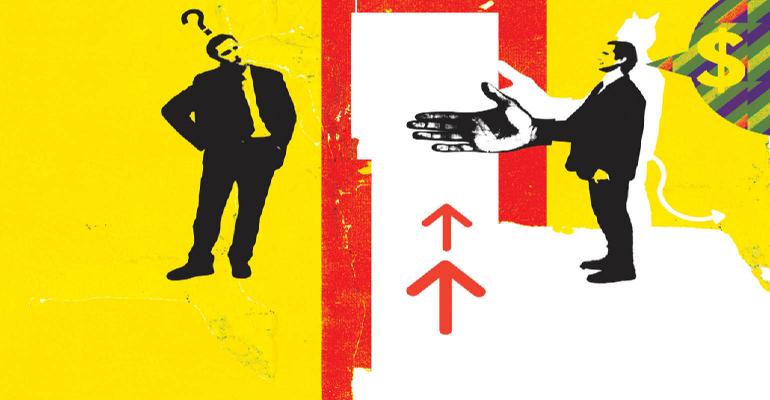 The Human Side of Estate Planning: Part II

Three psychological phenomena that happen in every engagement.

In the first installment of this three-part article, I provided evidence that a good estate-planning result doesn’t occur in a majority of situations and introduced the Path of Most Resistance, a model that identifies and illustrates the obstacles to a good estate-planning result. In this installment, I introduce three psychological phenomena that happen in every estate-planning engagement: transference, countertransference and triangles in relationships. These three phenomena impact estate planning, either in a positive or negative way.

Transference is fairly easy to illustrate in a few examples, but psychologists frequently disagree over its meaning. Indeed, a few major schools of psychotherapy actually deny the existence of transference.

In psychology, the classical way to define “transference” is to simply say that it’s a phenomenon in which people transfer feelings and attitudes, often subconsciously, from a person or situation in their past onto a present person or situation. It involves the projection of a mental representation of a previous experience or person on to the present situation or person with whom they’re interacting. The recipients of the transference usually play an important role that’s necessary for the projected relationship. There are usually subconscious encouragements by the client to the recipient to take on his feelings or beliefs about the situation or person.1

Transference occurs often in real life. For example, a boss at work reminds you of your irascible grandfather, so you’re afraid to enter into extraneous conversations with him. The person in front of you in line at the grocery store reminds you of your cousin, so you strike up a conversation, even though this person is a total stranger. Or, as one psychologist wrote, “the battle cry heard from loving couples around the world: ‘Stop treating me like I’m your mother!’”2

Example 1: Birth order mismatch. Suppose your client is the youngest child in his family. In typical engagements, you usually default to naming the oldest child as successor executor and trustee if a client doesn’t express a preference. In fact, you don’t even ask and simply prepare documents appointing the oldest child as successor executor instead of another of a client’s children. In this example, the client gets irate, accusing you of acting like her father, who favored the oldest sibling.

Example 2: Professional bias. You’re meeting with a new client who’s appearing extremely anxious and checking her watch repeatedly as you talk to her. Unbeknownst to you, the client’s last experience with an estate planner went badly due to a misunderstanding about the size of the estate planner’s fees and the hourly rate. The client has transferred her anxiety, which was caused by a bad experience with a past estate planner, on to her relationship with you.

About the best that we estate planners can do is to acknowledge that the projecting client’s feelings aren’t our fault and prevent taking on the client’s invitation to engage based on the transference. However, what’s behind and giving rise to the projected feelings indeed may be critical information for us to ferret out of the client.

In Example 1, you can apologize and be more careful in the future. In Example 2, you could ask the client about her anxiety, have a frank and open discussion about both the client’s and your expectations concerning the fees and other terms of the relationship and follow up with an engagement letter that confirms what you’ve discussed.

When you look back at some rocky times with clients, chances are that an undetected transference lay at the heart of the difficulty. The transference can arise in many other different contexts in estate planning. For example, a client who had a bad experience with probate of a family member’s estate may be hell bent on not using solely a will in her estate planning, having become visibly shaken at the mere mention of the word “probate.” Digging deeper into the causes of the transference is thus critical.

Estate planners aren’t immune to the psychological process. We bring our life’s experiences and psychological baggage into every estate-planning engagement, either consciously or subconsciously, whether we want to or not. Countertransference is defined as the often subconscious response of the recipient advisor to the client’s actions or perceived actions. Countertransference responses can include both the advisor’s conscious and unconscious feelings and associated thoughts from her past regarding things that the client says or does.

There are all sorts of possible examples of how countertransference can arise in estate planning, but here are two examples from my practice experience:

Example 1: Flipside of birth order mismatch. Suppose that your client, who’s the youngest child in her family, expresses strong negative feelings about an oldest child automatically being designated as executor just because that child was the oldest. Suppose further that you’re an oldest child who feels strongly that oldest children should automatically be considered for such a fiduciary position. You routinely draft wills naming the oldest child as executor when a client says nothing to the contrary. When the client states that she wants a middle or youngest child to be her executor, you may view the client in a somewhat negative light, particularly because you also hold your own youngest sibling in contempt for actions that he engaged in and was allowed to get away with just because he was the “baby” of the family. You’ve allowed your decades-old disdain for your youngest
sibling to color your judgment about the client.

Example 2: Professional bias. Your new client identifies herself as an engineer. You then think to yourself, “engineers are always problem clients because they ask too many questions, reduce everything to black and white and think that they know it all” and immediately get a little defensive, condescending and short with the client about the proper estate-planning process.

In both examples, you’ve allowed something from your past or opinions cloud your judgment in the countertransference.

Countertransference also can manifest itself in biases by the estate planner either in favor of or against certain estate-planning techniques. Additionally, estate planners can be morally opposed or outraged by their clients’ behavior to the extent that it impacts the estate planner’s ability to work effectively for the client.

A triangle is a three-person relationship system. The late Murray Bowen, MD, a psychiatrist and professor of psychiatry and a pioneer in the area of family systems theory back in the 1950s, developed the triangle as part of an eight-concept family systems theory. The triangle isn’t universally used by psychologists and psychiatrists, given that Dr. Bowen’s theory is but one of approximately 12 major schools of family therapy. Dr. Bowen argued that the triangle is considered the base building block of larger human emotional systems because he asserted that a three-person triangle is the smallest stable human relationship system. According to Dr. Bowen, a two-person system is unstable because it tolerates little tension before one or both participants “triangle in” a third person to reduce their anxiety that the tension between the participants caused.5

Dr. Bowen reasoned that a triangle can withstand much more tension than a two-person relationship because the tension can be shifted among three relationships (A-B, A-C and B-C) instead of just one, and the parties subtly shift back and forth among each other during the course of their relationship triangle. In fact, Dr. Bowen further reasoned that when the triangle anxiety becomes unbearable to one or more of the participants, a series of interlocking triangles can develop.

Learning about relationship triangles assisted me in explaining previously puzzling practice situations. As Dr. Bowen has written, “[t]he triangle describes the what, how, when, and where of relationships, not the why.”6 I often witnessed triangles in families in my estate-planning practice. I even unwittingly participated in some of these triangles as an estate planner. Triangles can involve not just living persons but also someone who’s deceased. Triangles also can involve inanimate objects, for example, occupants of a certain bedroom in an antebellum home. Triangles can exist among the client and two estate planners whose ideas are at odds with one another. At least one writer has called for a family systems approach to estate planning.7 Let’s consider a couple of examples of triangles in the estate-planning process:

Example 1: The tie-breaker. You’re meeting with a husband and wife about their estate planning, when they start to squabble over which of their children should be the successor executor. Frustrated, the wife turns to you, attempting to “triangle” you into the conversation on her side of the argument by commenting with a loaded question like, “What’s your opinion?” or “Don’t you think that he [the husband] is being hardheaded?”

In this example, the wife was frustrated with her husband in their communication about the choice of executors, and she attempted to reduce her anxiety by trying to find an ally.

Example 2: Aging parents. Your clients, a husband and wife who are getting on in years, are concerned about which of their children should handle their affairs when they’re no longer able to do so. They decide on one of their children to be their agent under their powers of attorney and tell all of their children of their decision. Not long after this, you receive a phone call from a child who wasn’t selected, expressing concern that his parents “may not be thinking clearly” in their selection of his sibling as agent, intimating his belief that his sibling has unduly influenced his parents and attempting to triangle you into the conversation. Here, the parents are viewed as one person in the triangle.

In this example, the child, suffering anxiety at the possibility of having a sibling serve as agent instead of himself, attempts to reduce that anxiety by trying to find an ally.

In the third part of this article, I’ll define and explore death anxiety and mortality salience and the role that they play in estate planning, common fears that clients face in estate planning and the complex relationship among a client’s thoughts about death, the client’s property and the objects of his bounty. I’ll also introduce estate planners to two tools to assist purposeful estate planners in the human side of estate planning: motivational interviewing and appreciative inquiry.

3. See, e.g., Thomas L. Shaffer, Death, Property, and Lawyers (Dunellen Press 1970). Back in 1665, in his Reflections, No. 26, Francois de La Rochefoucauld wrote, “[N]either the sun nor death can be looked at without winking.” For an extensive discussion and application of the phenomenon of transference to estate planning, see Shaffer, Chapter 7. See also Louis H. Hamel, Jr. and Timothy J. Davis, “Transference and Countertransference in the Lawyer-Client Relationship: Psychoanalysis Applied in Estate Planning,” 25 Psychoanalytic Psychology 4, at pp. 590-601 (2008) (Hamel and Davis).