/sites/all/themes/penton_subtheme_wealthmanagement/images/logos/footer.png
Recent
Recent
Eight Must Reads for the CRE Industry Today (May 17, 2022)
May 16, 2022
Investors, End-Users Compete for Last-Mile Warehouses as Rents Skyrocket
May 16, 2022
Dyal Said to Be in Talks for Stake in Real Estate Firm DivcoWest
May 16, 2022
'Dark Money' and Tax-Exempt Organizations
May 16, 2022
Featured
The 10 Best and 10 Worst States in Which to Retire in 2021
Jul 15, 2021
Poll: 15 Classic Books on Investing and the Markets
Apr 03, 2020
Fifteen Must-Listen Business Podcasts for Advisors
Aug 14, 2020
Celebrity Estates: Jay Leno and Planning for Classic Car Collections
Feb 22, 2022
Heckerling Institute on Estate Planning
brought to you by 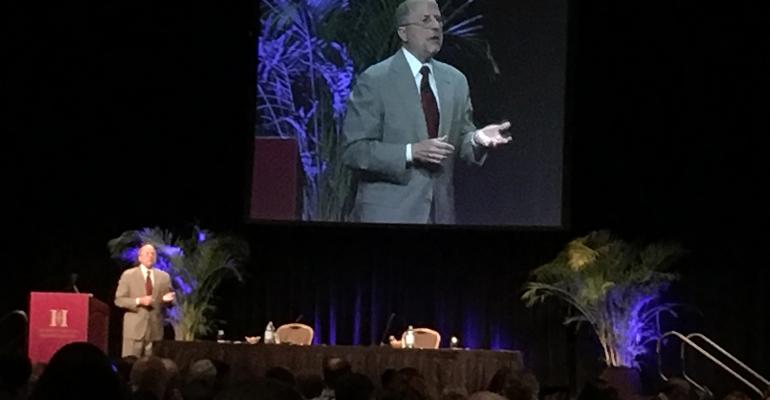 How Cold Assets Can Help Keep Others Hot

All freezes are united by a common theme.

When is a freeze really all about insulation? When it’s an estate freeze and you’re insulating assets.

“Estate freeze” is a term that’s so commonly tossed around in the estate planning community that it’s actually become fairly useless shorthand, as it can be used to describe such a wide variety of techniques. However, as discussed by Jeffrey N. Pennell in his presentation Tuesday at the Heckerling Institute on Estate Planning, all freezes are united by a common theme—the use of “cold” assets to insulate “hot” ones.

At its simplest, an estate freeze is an attempt to accelerate tax liability (estate, gift or otherwise) on any asset worth less today than it will be in the future (a “hot asset”). By paying taxes on the asset while its value is low (ideally using assets that either aren’t appreciating or are doing so more slowly, aka “cold assets”), clients can ensure that any future appreciation passes on transfer tax free.

One common example (but by no means the only way) how this transfer can be pulled of is through a sale to an intentionally defective grantor trust (IDGT)—not nearly as complicated a concept as it sounds. Basically, a client sells an appreciating asset to a trust in exchange for a promissory note. The client pays tax on the value of the note (often the trust also contains a clause where the client also pays income tax on the appreciation of the asset while it’s in the trust) using either cash or his unified exemption (both cold assets), while the hot asset grows in the trust.

Often the aspect of a freeze on which planners focus most (and how they sell clients on it) is the idea that they’re shifting future income without incurring gift tax on the value. However, according to Pennell, focusing on this aspect is currently misguided, as “the very simple exercise of incurring wealth transfer tax early to avoid wealth transfer tax on future appreciation is a placebo – it is not useful in the current environment in which there is no effective progression in the rate of tax that clients pay.”

Pennel argues that in our current flat tax environment, where everybody pays transfer taxes at a 40 percent rate, regardless of wealth level there is little to no value in the deferral aspect itself. Whether you pay the tax now or later is largely immaterial. “That’s just a feel-good explanation, but not really why you’d do this,” he maintains.

“The freeze itself is not what matters, it’s which asset I use to pay.”

Effectively, Pennel stresses the importance of using the “coldest” assets possible to insulate the “hottest” ones. Now what assets are “hot” and “cold” at any given time can be more difficult to determine, particularly in light of impending uncertainty about our transfer tax system as a whole.

Cash, for example is a reliably cold asset, but is not necessarily always the coldest. For instance, currently Pennel believes that the unified exemption is colder than cash, though that may be subject to change. On the other side of the coin, it’s tempting to think of “hot” assets as securities or real estate holdings, however, if for example, our current transfer taxation regime were to be replaced by a carryover basis system similar to that in Canada (one of the possibilities that’s been floated), then all of a sudden life insurance premiums become an amazingly “hot” asset because you’d effectively be able to avoid all tax on the build up of value and would want to put off converting that appreciation into ordinary income for as long as possible.

Though this may appear to be largely an issue of semantics (Pennel recognizes the value of estate freezes overall), with seismic regime changes likely on the horizon, understanding the source of a technique’s value, and how it can change over time will be imperative for advisors looking to help their clients whether the oncoming storm.