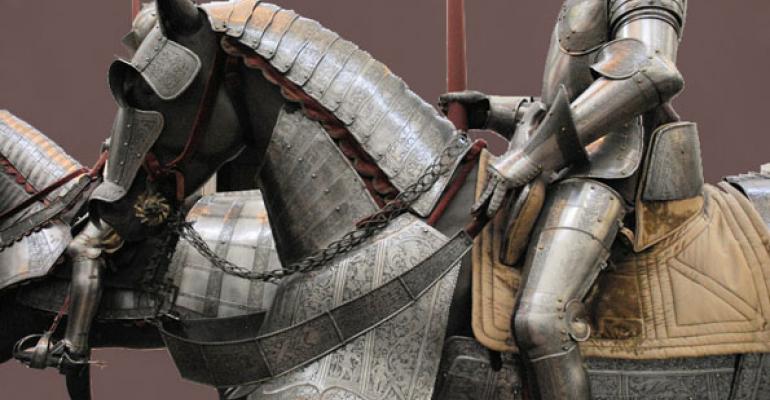 The origin of trusts: A tall tale

On a dreary Tuesday morning in April 1189, the day begins uneventfully for Sir Loin.  He’s a man of habit, somewhat speculative, but not predisposed to loiter.

Loin is seated at his customary round table, well into his third cup of dark roast, reading the morning paper.

Midway to his lips, the silver cup is brought to a halt. “Holy Grail!” he shouts to the slightly hard-of-hearing innkeeper Gladys—“you’re not going to believe this!’  Gladys sets down a handful of earthenware, and asks:  “What’s the royal scoop?”

“You’d think after 100 years, these Crusades would end.  But no–King Richard is at it again.  He’s looking for a few good knights to head down to Jerusalem.” “Come to think of it,” and here Gladys pauses, “I heard it through the grapevine. Then again, why go all the way to Jerusalem for a few good nights?”

“Gadzooks, no, Gladys.  A few good KNIGHTS ...  Anyway, looks like I’ll be hitting the road.  No telling when I’ll be coming home to merry old England again.  This could drag on for years.”

Gladys is startled into silence.  Loin has been a reliable customer, not to mention loaning her at least one serf to bring up 10 or more buckets of well water every day except Sunday.

“Tell you what,” Sir Loin continues thoughtfully, “You know that 100 hectares I own down by the river?”

“You mean where that weirdo Sir Plus dumps all those rusty old used suits of armor?  That pile of junk is nasty.”  Sir Loin concurs.  “Still, I hate to see them go to waste.”

He cuts to the chase—that is, joust.  “Gladys, I need a favor.  I need someone I can trust to look after that land while I’m gone.  You know, keep an eye on things, accumulate more armor now and then, and, on the first day of every school year, give each of my nephews a cleaned-up suit.  Maybe one that’s a little large so they have room to grow into it.”

She’s listening.  “But,” he cautions,  “don’t let the supply run out.  I want there to be plenty of armor for generations to come.”

After a few moments of thought, he declares: “I’m transferring title to the land to you for now.  When I get home, you can transfer title back to me.  And if you get word that I’ve been croaked—whether hit by an axe or from eating bad mushrooms—please give the land and the armor to my nephews equally.”  She nods, bows and accepts an unusually large tip for the meal.

All the same, her skepticism persists.  “I fear that you’ve taken leave of your senses. But you’ve been a good customer for years, so I’ll do it.  Go ahead and transfer title to me.”

And Sir Loin does transfer title to his land to Gladys, and heads off to war.

Sir Loin knocks on Gladys’s door.  “Looks like she's adding a second story,” he muses.  “And is that a pool and cabana I see out back?”  Gladys opens the door wearing an expensive Stella D’oro outfit.  The color drains from her face.  This is a moment of exquisite tension.  Unfortunately, the first movie camera is a good 700 years away.

“I never expected to see you again.”

“No way.  The demand for used armor has gone viral.  I’ve got title to the land and I’m keeping it. So sue me…”

Which is what Sir Loin does.

Comes the day of judgment.  The Judge strokes his beard, nods his head, does his best to look wise and finally says: “We’ve been using this simple rule for years: The person who holds title to a property owns it.  You’d think people would have learned by now to be more careful about transferring title to their land.  The land is in Gladys’s name, so the Law of England says she owns it.” Gavel pounds.  “Next case…”

And for years, folks like Sir Loin have petitioned the King for justice when ripped off by the courts.  Busy as the King is, it’s left to his confidante, the Lord Chancellor, to rule upon petitions.  Which means...Gladys isn’t out of the woods yet.

The Lord Chancellor strokes his beard, nods his head, does his best to look wise and says: “Gladys, you must give title back to Sir Loin.  You were merely holding title for his benefit.  Now that he’s back home, the land rightfully belongs to him.”

And that, friends, is more or less how trusts came about.