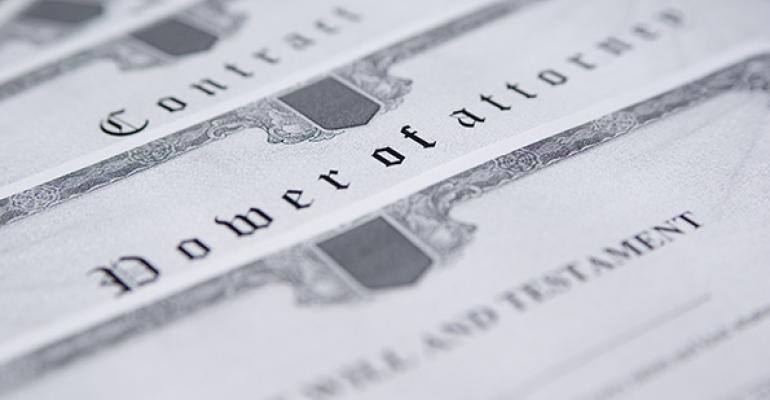 Gifts under Powers of Attorney

It’s common to include in a durable power of attorney (POA) the right for an agent (the person named to act on behalf of the principal who creates/grants the power) to make gifts.  Gift clauses raise a myriad of issues and should never be considered “boilerplate” or standard.  They should always be tailored to appropriately address your client’s specific needs and goals.  For many people, the new higher federal estate tax exemption ($5.43 million in 2015, inflation adjusted and potentially double for a married couple) might arguably make the default assumption for gifts under a POA, an express prohibition from making gifts.  Even if your client is subject to estate tax in a state that remains decoupled from the federal estate tax system, like New Jersey, the capital gains tax heirs might incur on selling an appreciated gift might be greater than the state estate tax saved by having made the gift.  So deliberate thought on what your client’s POA should say concerning gifts is vital to his financial security and accomplishing his planning goals.

How Some States View Gifts

Unless a POA document expressly addresses gifts, the agent’s right to make gifts is not likely to be inferred or assumed because the authority to make gifts is a “hot” power that the law takes a cautionary view of.

“Gratuitous transfer of property to attorney-in-fact not authorized:

This statute provides that an agent can only make gifts under a POA if the POA expressly authorizes it.  This rule is confirmed in cases regarding gifts under POAs, such as In re Trott2 and Bronston v. Commissioner.3

Regarding specific language to be used to ensure compliance with the above New Jersey law, it appears that a plain language statement that gifts are permitted should be sufficient.  Most important, if the principal wants the agent to be able to make gifts to himself, the POA should expressly state that it’s permissible. For example, a provision such as: “I authorize my Agent to make gifts on my behalf,” would only apply to third parties, not the Agent himself. Instead, the provision should provide: “I authorize my Agent to make gifts on my behalf, including gifts to the Agent himself or herself.”  It might also be advisable to address in such instances whether gifts to the agents descendants and spouse are permitted, whether gifts have to be equalized (for example, the agent is one of several children, can the agent make gifts to herself and her family to the exclusion of her siblings, nieces and nephews?).

The decedent died in New Jersey in August 1983.  In June 1983, she had executed a POA naming her son as attorney-in-fact.  This POA gave her son the authority to conduct business as well as:  “grant, bargain, sell, convey or lease...any property now or in the future owned by me ....”4 The decedent was, for the most part, not involved in business activities at the time of execution of the POA.  She did however, have a history of making gifts qualifying for the annual exclusion to her children and in-laws.  The attorney-in-fact made $10,000 in gifts to various relatives, including himself.

The Tax Court looked to New Jersey law to determine whether the POA authorized the making of gifts, and analyzed and distinguished two previous New Jersey cases: Von Wedel v. McGrath5, and Manna v. Pirozzi6. In Von Wedel, a husband had executed a POA in favor of his friend before the husband and wife left for Europe. World War II prevented the husband from returning to the United States.  The attorney-in-fact then made gifts of the husband’s property to the wife.  The POA contained very general language but then listed very specific business powers.  The court held that the POA didn’t authorize the attorney-in-fact to make gifts to the wife.  Rather, it found, the power was only intended for “ordinary business affairs.”7

In Manna, the decedent gave his brother a POA.  The administrators of the decedent’s will challenged the attempted exercise of the power during the decedent’s lifetime. The Bronston court said about Manna, “Taken as a whole, the document was designed for a business purpose.”8

The court in Bronston distinguished Von Wedel and Manna stating that the decedent’s POA contained both general language and the specific authority to “grant [and] convey...any property...”9 powers in Von Wedel and Manna didn’t contain the language of “granting.”  The court further stated that there was no language in the Bronston POA or facts that would appear to limit the POA to strictly business matters.  The decedent in Bronston had no business affairs, the purpose of her POA was to provide for her support and medical care and to continue her usual practice of gifting gifts qualifying for the gift tax exclusion “to the natural objects of decedent's bounty, her children and their spouses.”10 The court focused on the personal circumstances surrounding the creation of the POA and the personal concerns of the decedent for her family members.  The Tax Court cited Estate of Gagliardi v. Commissioner and concluded, “[W]e believe the New Jersey courts would sustain Bronston's authority to make the gifts that are at issue.”11

The Bronston and Gagliardi courts have been criticized for straining to find that gifts were part of the principal’s ordinary course of business and for drawing unfounded distinctions between these fact patterns and similar cases in which such an interpretation of state law was rejected by federal circuit courts.

Indeed, such decisions are very unreliable.  They're prone to attack on appeal by the Internal Revenue Service and are at substantial risk because of the direct conflict between these rulings and traditional agency rules of interpretation.

Bronston has also been referred to as being of questionable weight. Thus, Bronston appears to be an anomaly, and a position taken based on this case would be subject to a fight by the IRS.

As a general rule, if a POA doesn’t include an express authority to make gifts, they can’t be made.  However, other actions may be feasible to indirectly accomplish some of the same goals.  The POA can be used to change the title to assets, such as a deed, from joint tenants to tenants in common so that on the grantor’s death, part of the value of the estate may pass to the children or other heirs either under the laws of intestacy or the grantor’s will (even if a disclaimer is then required), thereby utilizing some portion of his applicable exclusion that may otherwise be wasted.

If the grantor isn’t competent to make gift transfers, and the durable POA signed doesn’t provide gift powers, an alternative approach to his making gifts is necessary to effectuate estate tax or other planning, is to have a guardian appointed and then have the guardian make gifts on behalf of the grantor.

This is a New Jersey case addressing a guardian’s ability to make inter vivos transfers for estate planning purposes.  The tests ultimately developed in this case provide useful general guidance to anyone addressing these issues.

In Trott, the court permitted a guardian bank to make inter-vivos gifts to the incompetent’s grandchildren (who were the sole heirs under the will) for “the principal if not sole reason of the possible savings of death taxes.”12 The court obtained this power by applying the common law equitable doctrine of substituted judgment, which gives the court the power to deal with the estate of an incompetent in the same manner as the incompetent would if he could function at full capacity.

The courts are now statutorily authorized to make gifts, as they weren’t when Trott was decided.  However, a five-part analysis in Trott governing when courts should exercise the power to decide if gifts from the incompetent’s estate should be allowed is still applicable.  Here’s the five-part analysis:

Your clients should re-evaluate any existing POAs (and revocable trusts) to be certain that the right of an agent (trustee) to make gifts makes sense in light of the current tax law and his current circumstances.  The case law that exists in many states is based on tax law presumptions that no longer apply to most merely wealth Americans so expressly addressing your client’s current objectives is important.