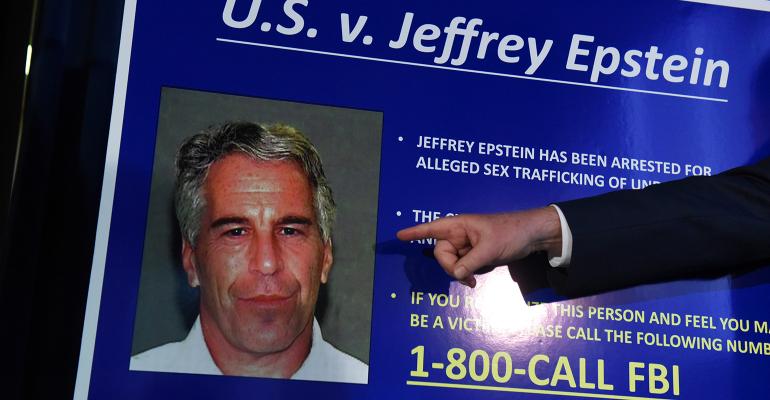 Financier and convicted pedophile Jeffrey Epstein was in jail awaiting trial on charges of conspiracy and trafficking minors for sex when he hanged himself.

By David Voreacos and Neil Weinberg

(Bloomberg) -- Jeffrey Epstein wrote a will just two days before his suicide, placing $578 million in assets in a trust, a move which could complicate efforts to collect damages by women who say he sexually abused them.

By placing all of his assets in a trust, Epstein could shield their distribution from the public. He asked that Darren K. Indyke and Richard D. Kahn be appointed as executors, according to a copy of the will filed Aug. 15 with the court in the U.S. Virgin Islands.

Epstein, a financier and convicted pedophile, was in jail awaiting trial on charges of conspiracy and trafficking minors for sex. He hanged himself Aug. 10 in a federal jail cell in Manhattan, a death the city medical examiner determined was a suicide. The will and assets list were first reported Monday by the New York Post.

Boris Nikolic, a biotech venture capitalist who was part of a circle of scientists Epstein cultivated, was named as a backup executor should the others be unable to serve. He said Monday night he was “shocked” to be named in the will.

“I was not consulted in these matters and I have no intent to fulfill these duties, whatsoever,” Nikolic said in an emailed statement.

Epstein’s real estate -- from his New Mexico ranch to his Manhattan mansion and private Caribbean islands -- is held through various entities laid out in the will. The assets listed are similar to those in Epstein’s unsuccessful bail request after his July 6 arrest.

The valuation does not include his extensive art collection, which is subject to appraisal, according to the document.

Epstein pleaded guilty more than a decade ago to state prostitution charges in Florida, admitting to soliciting an underage girl. Epstein’s estate is expected to face many lawsuits by women who claim he abused them when they were children.

It’s possible that Epstein may not have had time to take all the necessary legal steps needed to transfer each of his assets to the trust, said Bruce Steiner, an estate attorney.

“It would be hard to transfer it that quickly,” Steiner said. “If he didn’t transfer the assets into the trust before he died, then the victims can simply go after the executors of his estate. Then it doesn’t matter who the estate goes to.”

Epstein’s trust, known as The 1953 Trust, remains a private document whose details won’t have to be disclosed by the court. In addition to determining how his assets will be used, the executors can “litigate, defend, compromise, settle, abandon or submit to arbitration” any claims against his estate, according to the document. There’s no reference to his arrest or the investigation.

Epstein’s brother, Mark, is listed as his next of kin. Indyke, who had served as an attorney for Epstein, and Kahn are “investigating potential debts and claims of the estate and at this time they are unknown,” according to the court petition for their appointment.

Prosecutors in Manhattan filed court papers Monday to close the case against Epstein, while saying they’ll continue to investigate others involved in his alleged crimes. On Aug. 16, the New York City medical examiner ruled his death a suicide.

The document doesn’t name the trustees for the Epstein entity. Indyke and Kahn will be paid $250,000 for executing the will, according to the document.

The will was witnessed by Mariel Colon Miro, a criminal defense attorney for the law office of Michael Lambert, and Gulnora Tali, who’s also an attorney with a private practice. Colon Miro and Tali didn’t immediately respond to phone calls seeking comment.

--With assistance from Sophie Alexander, Jonathan Levin and Anders Melin.

To contact the editors responsible for this story:
Jeffrey D Grocott at jgrocott2@bloomberg.net
Heather Smith