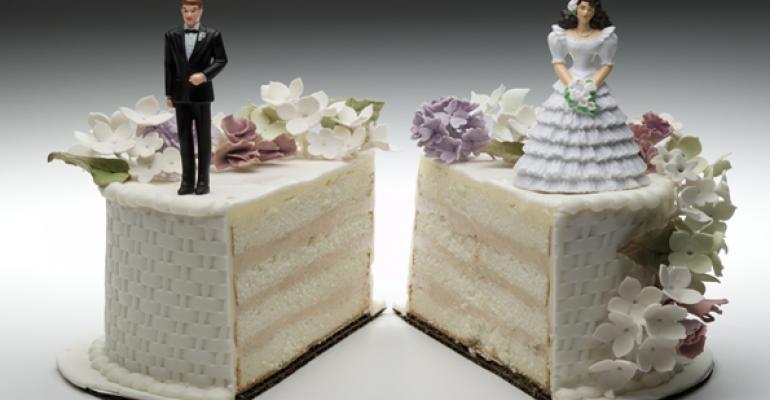 Pre-nuptial agreements are increasingly becoming an important part of estate planning. But, your clients may be resistant to the idea of a pre-nup based on outdated notions and incorrect assumptions about these agreements. Here are five myths about pre-nups and what you can tell clients to debunk them.

Myth 1: Not for Young People

Young people are marrying later than ever before.  The average age for a woman is 26 and for a man, almost 28.  By the time couples marry, they generally have acquired assets, maybe not $17 billion, as is the case with Mark Zuckerberg, but often cars, homes and 401Ks, if not considerable nest eggs.  Even if young people don’t have substantial assets, they have possibilities, for example, degrees or careers.  Today’s geek is tomorrow's Mark Zuckerberg. Today’s waitress is tomorrow’s Suze Orman.

Young people often have debts—credit card debt and student loans.  In this age of mounting educational debt, it’s important in a pre-nup to delineate who will be responsible for which debts and shield the party who isn’t responsible.

Finally, young people often support their spouses through school or give up careers to raise children.  A pre-nup can be used to protect the sacrificing spouse.

The misconception is that the man takes advantage of the woman.  The reality is that pre-nups can be used to help, not hurt, women.  They can be used to ensure that women are 50/50 partners in a marriage to compensate women for non-monetary contributions to marriage, such as child rearing, or for making career sacrifices, such as relocating or working part-time. Of course, more and more women today go into marriage with assets and careers and want to protect their progress.

Myth 3: Only for Rich and Famous

Pre-nups certainly are for celebrities, tycoons and moguls, but they’re also for just about everyone.  For example, if parents are planning to make gifts, establish trusts or leave an inheritance, their children need pre-nups.  For owners of family businesses or professional practices or licenses, pre-nups are critical.  Pre-nups are imperative for those who have responsibilities to children from a previous marriage or aging parents.  Finally, pre-nups are necessary to cover special issues applicable to older people, such as estate planning, Social Security, Medicare/Medicaid and long-term care (LTC).

Arguably pre-nups are more important for  someone with a modest nest egg–she can’t take chances with it.  An entrepreneur or actor can rebuild a nest egg by creating a new business or making a new commercial, but someone who has inherited wealth or generated savings using a philosophy of “slow but steady wins the race,” must ensure that no matter what happens, she’ll retain that nest egg.

This is tantamount to saying that if a person writes a will, she’ll die sooner; that if he takes out fire insurance on a home, the home is more likely to burn down; or that the purchase of LTC insurance ensures that a person will wind up in a nursing home.

In fact, a pre-nup might be viewed as a form of catastrophe insurance or divorce insurance without annual premiums.  In the light of the nearly 50 percent divorce rate in the general population, a pre-nup seems like an exceptionally good preventative measure.

Discussion of the possibility of divorce and the eventuality of death should strengthen a relationship, make parties aware of its fragility and provide heightened respect for the union.

Clients may complain that pre-nups mean, “I don't love you, I don't trust you.” The reality is that a pre-nup says, We love each other and trust one another so much that we can share even our most intimate secrets.  It’s well known that people are intensely private about their money.  Most would sooner talk about their sex lives.  But in a pre-nup, each party must be candid with the other about money matters and provide full disclosure of assets and liabilities.

Such disclosure usually opens up a dialogue regarding nonfinancial or lifestyle matters, such as careers and work schedules and household and child rearing responsibilities.  And such communication tends to bring about the sharing of mutual expectations and goals, demons and doubts.

Further, in a pre-nup, the parties identify their issues, come to grips with their differences and resolve them.  The pre-nup provides a template for dispute resolution and thus establishes a foundation for a forever-after marriage.

And what’s so romantic about a messy divorce?