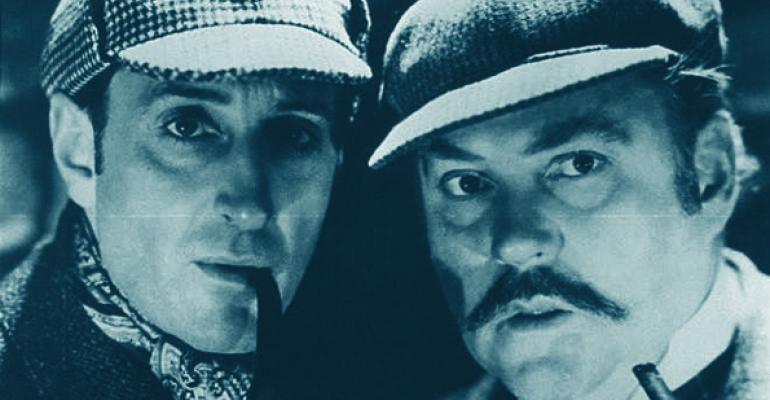 The Case of the Stressed Out Beneficiary

What Sherlock Holmes can teach us about making distributions

In the fall of 2010, Laurie R. King and Leslie Klinger “asked eighteen top writers who don’t normally write about Sherlock Holmes [to write] a story that plays a variation on the Holmes theme.”  The result is A Study in Sherlock (Poisoned Pen Press, 2011).

Authors King and Klinger never asked me, and it’s probably just as well.  But if they had, here’s what I might have submitted (with apologies to the legit writers).  The time is July 2013.  Sherlock Holmes is, of course, the renowned master detective, lately doing a gig in the United States.  Now for the real surprise: He is carrying out that assignment as a trustee!

But some things don’t change: Just as in the classic novels, the narrator—for the rest of this column—will be Dr. John Watson, Holmes’ friend, assistant and sometimes co-trustee...

It’s July 4th. I call upon Mr. Sherlock Holmes in his temporary quarters in the historic Baker Neighborhood in central Denver, Colorado.  I have come to invite Holmes to join me for lunch at The British Bulldog on Stout Street, where we can watch a football match and peruse the London Times.

As I let myself in, the clock on the mantelpiece shows that it’s just past the noon hour.  Holmes is deep in conversation with a white-shirted, white-haired elderly gentleman who peers through black-framed eyeglasses.

Apologizing for the intrusion, I am about to take my leave—when Holmes pulls me abruptly into the room and closes the door behind me.  With hardly a word spoken, but with a solicitouseye, he waves me to an armchair.

After introducing the elderly gentleman as Mr. Richard Balkan, Holmes raises an outstretched hand in my direction.  “Mr. Balkan, allow me to introduce a most clever associate and occasional co-trustee, Dr. John Watson.  Dr. Watson has helped me puzzle through many seemingly unsolvable requests for funds made by beneficiaries.  I have no doubt that he will be of the utmost use to me in dissecting the request recently made of you.”

I quickly learn that Balkan, a self-described curmudgeon and spoilsport, is trustee for many of his extended family’s trusts.  As Balkan speaks, it becomes apparent to me that he’s an honorable trustee—one who administers the family’s trusts according to well-thought-out principles.

The principle at work here is, as Balkan tells it, that trust distributions are properly made only when a beneficiary’s life will be enhanced.  In contrast, requests amounting to mere lifestyle subsidies are to be declined.  Balkan tells us that, unless convinced otherwise, his tendency is to decline most beneficiary requests as subsidies.

Balkan is troubled by a very recent request. And that’s what brings him to Holmes’ quarters this day.

Balkan: “Last week, my niece Elizabeth called and asked nervously whether funds would be available for a cleaning woman for her house.  She said she was very busy and having one less burden would be of great benefit.  My first reaction was ‘obviously not.’  Hiring a cleaning woman is clearly a standard-of-living matter—a subsidy—that she should take care of herself.”

And: “Before answering Elizabeth, I decided to seek your counsel, Mr. Holmes. You have a reputation for seeing life-enhancements where others do not.”

I have no keener pleasure than following Holmes in his professional deliberations as trustee.  His rapid deductions, as swift as intuitions, yet always founded on a logical basis, run circles around even the most conscientious of trust committees.

Holmes strokes his chin and is silent for a very long while, eyes looking toward the ceiling.  There’s no time to prepare and smoke his pipe, and in any case, all he needs are a few more facts—the critical ones.

Holmes begins pacing across the well-wornPersian carpet.  “Let’s look at this a little more closely, Mr. Balkan.  Does your niece work full-time?”

“Is her husband fully occupied with his job?”  “Yes.”

“How much time does she have for herself, in light of all those other things she has to do?”  “My guess is: Very little.”

Holmes stops pacing.  Stands motionless for three beats.  And then slowly, in a barely audible voice, as if speaking to himself:  “It’s elementary…under the circumstances, Elizabeth is very busy… having a cleaning woman come in once a week would give her a little free time to sit back and relax…to think about this, that, and the other thing…to unwind over a cup of tea…”

He turns to Balkan, voice now raised:  “Would you consider having this little bit of time for herself to be an enhancement or a subsidy?”

Balkan’s face flushes as he stammers:  “Well, I guess—an enhancement, when you put it that way.”

Holmes turns to me: “Get your hat and coat, Watson.  I think if we drive to Stout Street, we shall be just in time for lunch.”

This tale was adapted from “Philosophy Yes, Rigidity No,” one of the 25 positive trustee/beneficiary stories that may be found inTrustWorthy—New Angles on Trusts from Beneficiaries and Trustees.