/sites/all/themes/penton_subtheme_wealthmanagement/images/logos/footer.png
Recent
Recent
Seven Must Reads for the CRE Industry Today (May 24, 2022)
May 23, 2022
Investment Activity in the Skilled Nursing Sector is Ramping Back Up
May 23, 2022
NASAA Approves Model Rule Targeting Unpaid Arbitration Awards
May 23, 2022
New York Tax-Paying Residents Were Moving Out Even Before Covid
May 23, 2022
Featured
The 10 Best and 10 Worst States in Which to Retire in 2021
Jul 15, 2021
Poll: 15 Classic Books on Investing and the Markets
Apr 03, 2020
Fifteen Must-Listen Business Podcasts for Advisors
Aug 14, 2020
Celebrity Estates: Jay Leno and Planning for Classic Car Collections
Feb 22, 2022
Heckerling Institute on Estate Planning
brought to you by 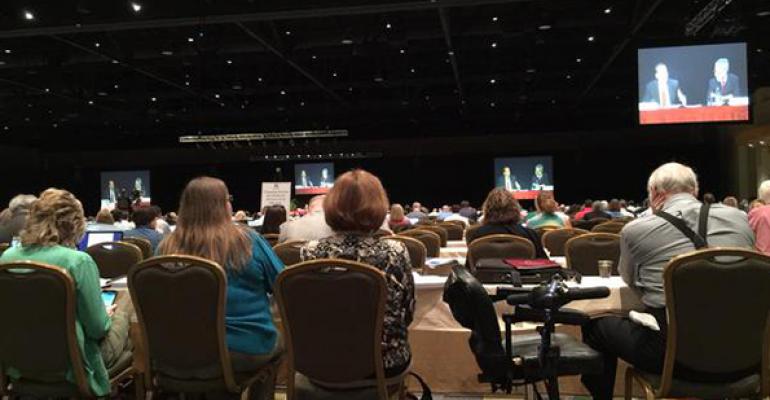 Beyond the Basics of Basis

Turney Berry discusses the importance of basis planning now that exemptions have exploded.

Turney P. Berry, a partner at Wyatt, Tarrant & Combs, LLP in Louisville, Ky. and a member of Trusts & Estates Estate Planning & Taxation editorial advisory board, will be presenting Wednesday and Thursday at the Heckerling Institute on Estate Planning in Orlando, Fla. I spoke with Berry prior to those presentations.

Berry’s first session, Building Basis, Beyond the Basics: Effective and Efficient Basis Building Strategies for Your Client, grew out of a presentation he gave in April 2010 at an ACTEC meeting in Knoxville, Tenn.  Although some new wrinkles about basis have evolved since his presentation eight years ago, the basics of basis building are still the same.  In fact, says Berry, “there’s nothing more important in estate planning today.”

Since that 2010 presentation, the federal estate tax exemption has doubled and as a result, so have the benefits. “If I can find assets to include in the estate of a relative who doesn’t have substantial personal resources, I can obtain up to $11 million in new basis when a parent, grandparent, aunt, uncle, etc. dies. The benefits are astounding.”

With regard to HR 1—the new tax law—Berry is skeptical that the ability to obtain basis merely by giving someone assets or giving them a general power over a person’s assets (especially because the general power can be structured so that it can’t be effectively exercised because of the associated limits put on the power) will remain in the law for very long. “The ability to thwart the income tax is too great,” he states. “That’s why,” says Berry, “the gift tax exemption stayed at $1 million in 2001. Accordingly, if you have low basis assets, you should get on with your planning.”

Berry’s second presentation, Trustees, Beneficiaries, Directors! The Uniform Directed Trust Act Can Conjure a Hollywood Ending from Even the Most Difficult Family Script, will focus on the Uniform Directed Trust Act, which was approved last summer. Berry chaired the study committee for the UDTA and was the vice chair of the drafting committee. He has spent the last several years working on bringing some clarity to this area of law and making directed trusts more useful for everyone.

In fact, Berry sees trusts as increasingly mandatory. Without a trust, the income from property will be taxed to the taxpayer based on where he lives. Thus, a taxpayer will likely have choices about state income tax if he has his assets in a trust. Further, a taxpayer can give others powers over his property for purposes of acquiring basis with a trust.

I asked Berry to share some of the most important pieces of advice he’ll be giving to his clients this year and beyond. He noted that if you have a client with business or assets producing active business income, he’ll need to model different business structures to see which is best. Right now, says Berry, there aren’t many rules of thumb; instead, every client needs to run the numbers. If a client has any elderly relatives who lack taxable estates, he should consider upstream planning to get them some assets that can be left back to the client in a tax-advantaged way. And, if a client has low basis assets, then he should look around for opportunities to increase his basis now while we know what the law is.