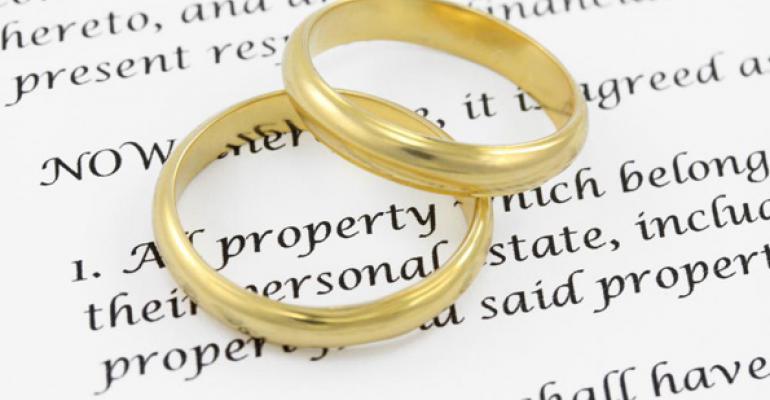 In Private Letter Ruling 201410011 (March 7, 2014), a taxpayer asked the Internal Revenue Service to rule on two issues related to a marital trust set up by an antenuptial agreement.  Specifically, the IRS ruled on whether a spouse’s right to elect under a certain provision in a revocable trust was a “contingency” under Internal Revenue Code Section 2056(b)(1) and whether a marital deduction should be allowed for certain limited liability company (LLC) units distributed to the marital trust.  The IRS ruled that the right to receive the elective marital portion wasn’t a contingency and allowed the spouse a marital deduction for the distribution to the marital trust.

The LLC consisted of voting common units, non-voting common units and preferred non-voting units.  It received monthly distributions from a limited partnership engaged in the management of shopping centers.  The LLC also held shares in a corporation, which in turn operated as a real estate investment trust.

What Constitutes a Contingency?

The IRS reviewed case law and several revenue rulings in which a decedent and his wife were parties to an antenuptial agreement.  The revenue rulings held that an amount bequeathed to a wife under a will passed from the decedent to his surviving spouse and therefore, qualified for the estate tax marital deduction.  (See Revenue Ruling 54-446, Rev. Rul. 68-271, Rev. Rul. 82-184.)  Applying the revenue rulings and case law to the instant case, the IRS determined that the spouse would receive certain property interests under the terms of the antenuptial agreement pursuant to the terms of the revocable trust, unless she elected under the revocable trust to receive her elective marital portion.  In each event, she would have an absolute right to any property passing outright to her, as well as an absolute right to income from any property passing to the marital trust.  Thus, the property interest passing outright to the spouse is a nonterminable interest, and the property interest passing to the marital trust is also a nonterminable interest if it satisfies Section 2056(b)(7).  “The requirement that Spouse make a timely election is ‘a mere procedural formality’ and is not a contingency within the meaning of [Section] 2056(b)(1),” said the IRS (citations omitted).  As such, the spouse’s right to elect under Section 3A(7) of the revocable trust isn’t a contingency under Section 2056(b)(1).  Moreover, said the IRS, the revocable trust property actually distributed outright to the spouse and to the marital trust was “property which passes from the decedent to his surviving spouse,” for purposes of Section 2056(b)(1).