Gold soared in 2016, as the Brexit vote sent global markets into turmoil and the uncertainty around the U.S. presidential election caused a flight to safety. The sub-industry was up 89.4 percent for the year, the most of any industry. Its stock proxy is Newmont Mining, a 4-star rated company by CFRA, which ended the year at about $34.

While oil and natural gas prices continued to decline in 2016, this sub-industry benefits from the consistent transportation or storage volumes of oil and gas. And judging by its 49.8 percent gain in 2016, volumes weren’t hurt. Kinder Morgan, a 4-star rated CFRA company, is the proxy, ending the year at nearly $21.

The U.S. steel industry rallied at the end of 2016 on Donald Trump’s election and his stance on boosting U.S. manufacturing. Some analysts are expecting the commodity to bounce back even further next year. The sub-industry delivered a 47.7 percent return in 2016. Its proxy is Nucor Corp., rated 4 stars by CFRA, which ended the year at nearly $60.

Despite industry consolidation, semiconductor companies finished 2016 with sizeable gains, up about 47 percent. Lam Research is the stock proxy, a 4-star-rated company by CFRA, which ended the year at nearly $106.

The construction market had a strong year, driven by increases in spending and pipeline expansion, and the materials industry benefited, gaining 44 percent in 2016. Martin Marietta Materials, a 5-start-rated company by CFRA, is the sub-industry’s proxy, ending the year at nearly $222.

As technology, electronic devices and the Internet of Things continued to dominate in 2016, the computer and electronics industry benefited. The sub-industry rose 44 percent last year. Best Buy, rated 3 stars by CFRA, is a good proxy, ending the year at nearly $43.

The increase in construction spending also paid off for the construction machinery and heavy trucks industry, which delivered a 40 percent return for 2016. Look to Cummins Inc. as a proxy. It’s a 4-star-rated CFRA company and ended the year at nearly $137.

A shortage of farm labor and a shift toward sustainable agriculture drove growth in the agricultural and farm machinery segment in 2016. The sub-industry grew 35 percent during the year. Deere & Co. is a good proxy, with 3 stars from CFRA and a price of $103 at the end of the year.

Rising commodity prices created an advantage for food distributors in 2016, with these companies gaining 35 percent. Sysco Corp., CFRA’s proxy and 3-star rated company, was a top gainer, driven primarily by its acquisition of Brakes Group, a European food service distributor in February. It ended the year at $55.

Construction and engineering also benefited from the increase in construction spending, returning nearly 33 percent for the year. The stock proxy is Quanta Services Inc., which received 4 stars from CFRA analysts and ended the year at nearly $35.

As demand for specialized services dwindled in 2016, this sub-industry suffered the highest loss, down 31 percent for the year. This segment includes services not classified elsewhere, such as residential, home security, legal, personal, renovation and interior design, consumer auctions and wedding and funeral services. H&R Block is the proxy, a 3-star rated company that ended the year at nearly $23.

Dwindling demand for traditional office supplies and increased competition lead to a 26 percent decline in this sub-industry last year. Pitney Bowest, a 3-star CFRA rated company, is the proxy, which ended the year at $15.

Despite the possibility that the new administration could repeal Obamacare, health care distributors had a rough 2016, with these stocks falling 22 percent. AmerisourceBergen is the proxy, a 4-star-rated company that ended at $78.

While athletic shoes had a good year, other footwear stocks tumbled, with this sub-industry slipping 19 percent. Nike, down about 14 percent in the last year, is the proxy. It’s a 4-star-rated company and ended the year at about $51.

Consumer spending wasn’t quite up to par in the personal products industry, which dove nearly 17 percent in 2016. Estee Lauder Co., rated 4 stars by CFRA, is the proxy. The company was down 10 percent in the last year, ending 2016 at $76.

Despite a pickup in the housing market, consumers are still not spending money on furniture, a non-essential item. The homefurnishing retail industry dipped nearly 16 percent last year. Bed, Bath & Beyond, down about 13 percent in the last year, is a good proxy, CFRA says. It has a 3-star rating and closed the year at about $41.

As consumers continued to distance themselves from traditional supermarkets, food retailers faced pressures. The stock of companies in this sub-industry declined nearly 16 percent in 2016. Kroger, a 3-star-rated company by CFRA, is the proxy, ending the year at nearly $35.

The Internet continued to grow in popularity in 2016, and that, unsurprisingly, hurt the printing and publishing industry, which was one of the worst performing. These companies reported a loss of nearly 15 percent. News Corp., rated 3 stars by CFRA, is the proxy, ending the year at $11. It declined 11 percent in the last year.

Biotech companies took a beating last year, down 14 percent. Celgene Corp., which develops medicines for cancer and inflammatory disorders, is the proxy. Its stock was down about 3 percent in 2016. Despite that, CFRA gives it 5 stars, and it ended 2016 at about $116. 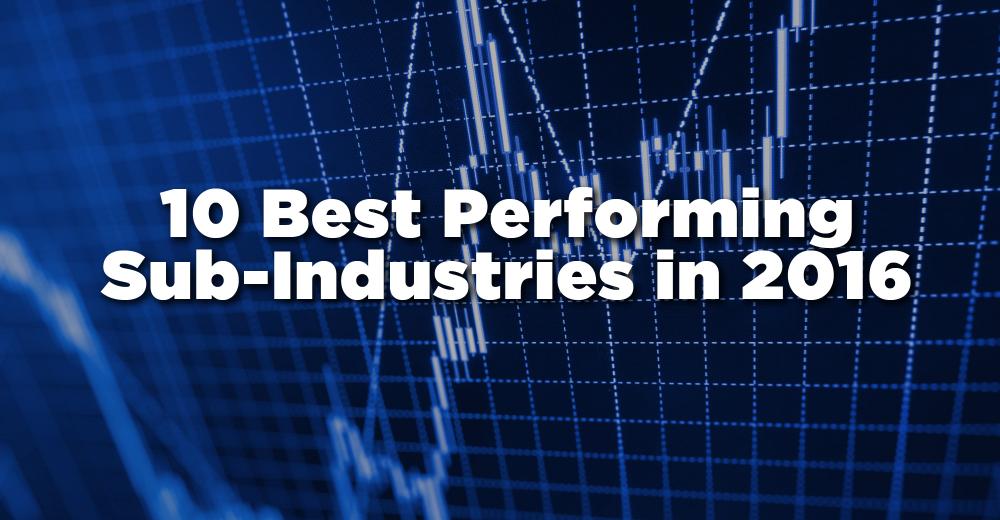 Next Up
Bob Doll’s 10 Predictions for 2020
Start Slideshow ›