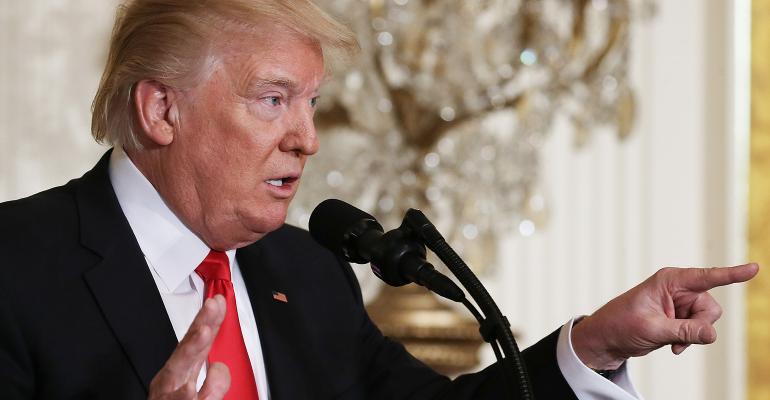 What Markets Are Teaching Trump Administration

We know, of course, that this move was reversed during the trading day, and over the subsequent months.  The Dow Jones index has risen 14.2 percent by March 16.  Why markets initially reacted negatively to the election, and why the bearishness was replaced by a surge in optimism, have a lot to do with the key elements of the Trump campaign - - factors that pulled equities in opposite directions.

There were two key components to candidate Trump’s appeal -- increased stimulus and trade restrictions.  If elected, he repeatedly promised, he would reduce regulation, and lower corporate and personal income tax rates.  Such structural changes, if implemented, would promote higher equity valuations, and increased disposable income would stimulate consumer spending and faster growth.  A large increase in infrastructure spending, that Trump also promised, would add significantly to jobs.

Market reaction to these promises was ecstatic.  Companies welcomed the promise of less regulation and lower taxes, and investors bought equities at higher valuations as they anticipated faster economic growth.  Lower income workers, whose wages had not kept pace with the equities’ rise from their 2009 lows, hoped that a Trump administration would be positive for jobs and incomes.

There was also a second part to the Trump campaign - - restrictions on foreign trade - - that led to the market swoon immediately after the election results were known.  Trump had promised voters that he would impose a punitive tariff on Chinese products entering the U.S. to offset the “unfair advantage” that China enjoyed.  This would enhance the competitiveness of U.S. products and, among other things, create jobs for workers in long-suffering Michigan, Ohio and West Virginia.

The interventions proposed by Trump included building a wall on the U.S. southern border to discourage undocumented workers coming from Mexico, deport those already in the U.S., cancel the North American Free Trade Agreement, and impose tariffs on imports from Mexico.

Although U.S. workers would have been happy with either move, stimulus or trade restrictions, investors have shown a distinct preference for lower taxes and less regulation. Equity markets fear that U.S.-imposed restrictions on trade would provoke retaliation by exporting countries, slowing global trade and economic growth.  For example, Chinese officials have put out word that increased import tariffs would be met by additional restrictions on U.S. multinationals’ activities in China. And Der Spiegel has reported that the German government could react to tariffs being imposed on imports of BMWs, for example, by making U.S. import duties deductible from German taxes, nullifying the impact.

What the future holds for financial markets depends very much on the path the Trump administration follows. If, for example, the Congress passes the budget by August as Treasury Secretary Steven Mnuchin hopes, with meaningful moves toward tax reform, not only would the equities’ rise be validated, but prospects for further increases would also brighten. If the emphasis, instead, is on new trade restrictions, provoking retaliation from Mexico, China or Germany, the equity market will feel the adverse impact.

Recent signals are positive.  Mnuchin said last month that he is in no hurry to label China a “currency manipulator,” contradicting Trump’s promise last October to ask his Treasury secretary to do just that on the first day of his administration.  Mnuchin is undoubtedly aware that naming China a currency manipulator would have the opposite effect.  It could provoke additional capital outflows, increase the risk of a currency devaluation and increase exports.  And Stephen Schwarzman, who heads Trump's Strategy and Policy Forum, said Sunday that he anticipated Trump would dial back the criticisms of China.

Messages from Wilbur Ross, the new secretary of commerce, have also been promising.  He said over the weekend that he would like to “lower the temperature a little bit” in U.S.–Mexico relations. Even if NAFTA is annulled, he suggested, the U.S. could have a new bilateral trade treaty with Mexico on similar terms as before. And rather an imminent introduction of the Border Adjustment Tax that would make U.S. exports free of taxation while taxing imports, Ross said that the Trump administration is “still studying” whether the border tax should be introduced.

Markets hold a key lesson that the young administration should not ignore:  Emphasize stimulus and have a positive impact on equities and economic growth, or introduce trade restrictions and increase the chances of an equity correction and U.S. recession.