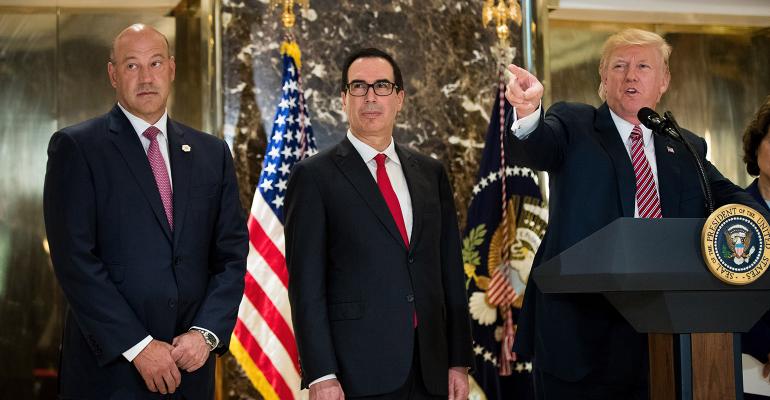 Weakening Leadership in Washington Takes a Toll on U.S. Stocks

"How can you with confidence apply risk-on or risk-off thematics when data is pretty beige and Washington a massively eye-popping, head-shaking uncertainty?" asks Informa Chief Macro Strategist David Ader.

The week just passed was a back-and-forth story for the Treasury market, with an initial relaxation of tensions over North Korea edging rates higher. They got a further lift on the back of a firm retail-sales report and its prior upward revisions. That pressure reversed when Trump came back with yet another fiery condemnation of all sides in the Charlottesville altercation, saying that both sides, including the apparently newly formed "alt left," were behind the violence and equating Confederate generals to George Washington and Thomas Jefferson. The latter duo, as I recall, were in favor of creating a union vs. breaking it up, so I’m not sure the analogy fits, but there you go.

Weaker-than-expected manufacturing data (-0.1 percent vs. an expected +0.2 percent) was mere icing on the cake.

Others were sufficiently appalled at the president’s generosity to the various alts to force the disbanding of his Strategic and Policy Forum and the Manufacturing Group (there were two such groups). This took its toll on stocks, quite naturally, as the leadership from the White House and confidence in Trump’s agenda continue to weaken, to say nothing of frighten. The Wall Street Journal’s Review & Outlook on Wednesday included the observation that a "GOP president who loses the business class has a big problem.” The latest Gallup poll puts his approval rating at a new low of 34 percent.

I can go back and forth on the data mix, but what has really captured the market’s attention is Trump’s stumbling leadership, internal White House turmoil, and alienation of his own party, all of which make getting things done that much less likely. And by that I mean it’s keeping big decision-making/positioning in neutral; how can you with confidence apply risk-on or risk-off thematics when data is pretty beige and Washington a massively eye-popping, head-shaking uncertainty?

Here’s what the FOMC Minutes said: “Several participants noted that uncertainty about the course of federal government policy, including in the areas of fiscal policy, trade and health care, was tending to weigh down firms’ spending and hiring plans. In addition, a few participants suggested that the likelihood of near-term enactment of a fiscal stimulus program had declined further or that the fiscal stimulus likely would be smaller than they previously expected.”

And it’s summer, which is why the papers are forced to carry stories like this one from the New York Times: "Fed Confronts New Reality on Inflation and Joblessness." Sorry, NYT, but this is not a new story.  Not to be outdone, the WSJ on the morning of the FOMC Minutes alerted us, on page 2 no less, “Fed to Offer Clues on Rates, Bonds,” later that very day. I would characterize both as more snooze than news.

That’s pretty much what the Minutes offered, as manifested in Dec Funds holding near the 1.21+ percent level that’s dominated for the better part of the last month, and the odds of hikes that month's sticky at about 38 percent. More-distant March funds, which carry better than 50 percent odds of a hike, have barely budged. The takeaway is that the Minutes didn’t do more to alert people to anything about Fed policy that wasn’t already there. In short, September still seems a likely start for a very gradual balance sheet reduction, and most members, while disappointed with soft inflation figures, think those will prove transitory eventually.

I took a slightly dovish bias out of it all, but nothing to shift hiking expectations for now: “Many participants, however, saw some likelihood that inflation might remain below 2 percent for longer than they currently expected, and several indicated that the risks to the inflation outlook could be tilted to the downside.” Not really insight, but there you go. Also, “most participants indicated that they expected inflation to pick up over the next couple of years from its current low level, and to stabilize around the Committee’s 2 percent objective over the medium term.” Two years is an awfully long time to hit their target, and this late in the cycle I ponder what a real slowdown, recession, would do to obtaining that goal.