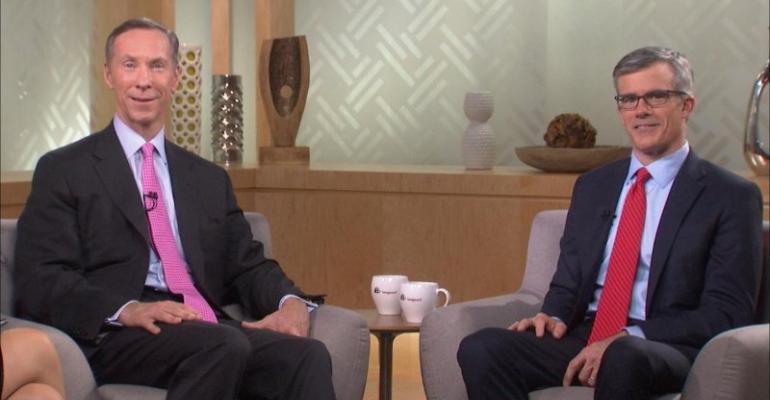 By Dani Burger and Rachel Evans

(Bloomberg) --Leadership is changing at Vanguard Group Inc., and if history’s any guide investors should watch out.

Each time the $4.4 trillion money manager has named a new chief executive officer, U.S. stocks have found themselves in the throes of temporary destruction. A few years after its legendary founder Jack Bogle stepped down, the technology bubble burst. Shortly after Bill McNabb won the role, the 2008 financial crisis unloaded on the market.

While both crashes were nothing more than unfortunate coincidences that Vanguard survived, the company is once again braced for change after announcing last week that McNabb would hand over the reins to  Tim Buckley, the firm’s chief investment officer. While the market doesn’t look particularly bubbly at the moment, there still could be trouble ahead as long as U.S. stocks continue to trade at dangerously rich valuations, McNabb said.

“They’re frothy,’’ McNabb said. “There is a risk that those valuations take the multiples down a few points, and all of sudden you can have a pretty big move in the stock market.’’

Ultimately, stocks may succumb to the same forces that drove investors to exchange-traded funds that track the S&P 500 Index, like Vanguard’s $70 billion ETF that goes by the ticker VOO: the second-longest bull market in history. Likewise, the S&P 500’s price-to-earnings ratio has expanded to 21.8, or 11 percent above its 10-year average.

Still, there’s little indication that such rich prices are deterring investors. The S&P 500 continues to hit new highs while about $2.3 trillion has been added to American share value this year.

At Malvern, Pennsylvania-based Vanguard, both McNabb and soon-to-be CEO Buckley have been warning investors to proceed with caution. Along with a likely return of volatility, high valuations indicate low returns going forward, and investors need to adjust their expectations, McNabb said.

“That’s never an easy thing for investors to navigate, lower returns and higher volatility,’’ he said. “We haven’t seen it yet, but when we do, it’ll be troubling. But it’s not the end of the world as we know it.’’