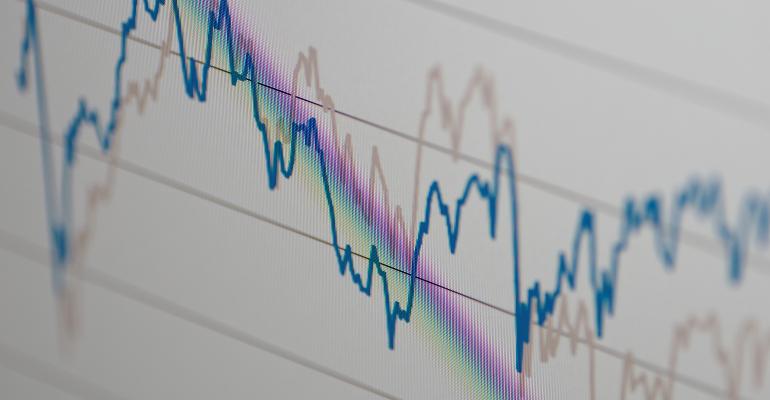 Valuation, History, Bursting Bubbles: In Search of the Floor

It's getting harder and harder to see the bottom.

(Bloomberg) -- Trillions have been zapped, major indexes corrected and one hellish week was followed by a manic Monday and another selloff Tuesday. People trying to reckon when the pain might end are worried.

It’s an age-old exercise in semi-futility, trying to pick the bottom in a market that showed itself capable of swerving by multiple percentages, multiple times a day. While nobody could have any precise idea where the floor lies amid volatility that by one measure reached the most in 21 years yesterday, frameworks are emerging for how to think about the many forces acting on sentiment and to estimate how things could go.

“Investors are starting to appreciate the precarious situation of extended valuations mixed with runaway inflation and a labor market that gives the Fed cover to tighten dramatically,” said Max Gokhman, chief investment officer at AlphaTrAI. “Earnings will be more important, but ultimately we need to see valuations come in more before we bottom out here.”

One simple model is price versus profit. The Nasdaq 100 trades at 25 times forward earnings, down from 30 at the end of 2021. In the past two major selloffs, the price-to-earnings ratio fell at least to 18 and as low as 16 before a meaningful rebound started. At the current earnings forecast of $569.6 per share, the index would need to fall more than 25% before the P/E hits 18.

Another framework is history. The market’s capacity to tank while the Fed withdraws stimulus was demonstrated in the fourth quarter of 2018, when the S&P 500 slid to within points of a 20% correction. That selloff, the worst of the post-crisis era before the coronavirus panic, was a brutal test of trader fortitude. It saw the S&P 500 plunge more than 2% eight separate times. Based on earnings, stocks were cheaper in those days -- roughly 20 times annual earnings when the rout began, compared with more than 26 at the end of 2021.

In the latest downswing, U.S. equities have lost more than $5 trillion in value since peaking in November as software and internet stocks with nose-bleed valuations led the rate-fueled carnage. Down 13% in January, the Nasdaq 100 is on course for its worst month since the 2008 global financial crisis.

Golub Says Market Drop Was ‘Collateral Damage’ of a Rethink

At the crux of investors’ inventory of stresses remains the Federal Reserve. Traders are resolute in anticipating the central bank will plow on with increasing borrowing costs even as riskier assets tumble.

Matt Miskin, co-chief investment strategist at John Hancock Investment Management, said the FOMC’s meeting this week is a “fork in the road.” If the central bank acknowledges weaker economic data, geopolitical risks, or that they may take a more dovish path, the market could see a reversal. Should officials not provide any signals that there’s been a change in economic data, that other risks loom, “we could see further selling pressure.” In that scenario, it wouldn’t be inconceivable that stocks fall 20% from the recent high.

“It’s still a ‘valuation re-rating’ story and that is driven from the Fed,” he said by phone.

As of Friday, a lot of risk was priced in ahead of the Fed meeting that started Tuesday. Options implied a move of 2.7% in either direction, compared with a 0.6% average realized move going back to 2013, according to Stuart Kaiser, head of equity derivatives research at UBS Group AG. The S&P has only once in the past 75 meetings moved more than 2.7% on an FOMC day -- that happened in March 2020, he wrote in a note.

Art Hogan, chief market strategist at National Securities, said he’s looking for a few factors for signs when there might be a respite. For one, finding a reason to bounce has a lot to do with how quickly the market fell and how much damage has already been done. The average stock in the S&P 500 is down about 30% from its high, “so we’ve done a lot more damage under the hood than we have at the index level,” which could point to the gauge being closer to forming a bottom than it is to being at the start of something more severe.

Second, the major U.S. indexes are trading in oversold territory. The Nasdaq Composite’s 14-day relative-strength index (RSI) is sitting below 25, for instance. And third, “and what typically gets selling pressure to a crescendo,” is the shift from macro concerns -- including the Fed and geopolitical concerns -- starts to get looked at on a company-by-company basis, which gives investors time to evaluate stocks one by one again as more earnings reports come in.

This week and next, more than 55% of the S&P 500’s market-cap will report, according to Credit Suisse. Mega-caps including Apple Inc., Microsoft Corp. and Tesla Inc. are all slated to report earnings in the week.

“Investors tend to take a step back and say, ‘Wait a minute, the punishment doesn’t equal the crime,’ and likely that will be the case this earnings season,” Hogan said by phone. “We’ll likely reassess what we’ve done to those equities.”

Another catalyst to help the market find a low this week -- besides stocks being oversold and the potential for a bounce around the Fed meeting -- is the still-high risk premium stocks command over bonds, according to Gina Martin Adams at Bloomberg Intelligence, who compared stocks’ earnings yield to that of 10-year Treasuries. The latest premium is in the 78th percentile since the early 1960s -- and that justifies a rotation to stocks, she wrote in a note.

Meanwhile, Jim Paulsen, chief investment strategist at Leuthold Group, said a bottom may be close since fear among investors seems to be peaking -- as indicated by the speed at which prices have fallen, the spike in the VIX and the rush back into bonds.

“It’s evidence of that fear that tells me at some point, that those that want out are out,” he said. When that happens, “that allows marginal buyers, without any sellers, to really move the market up again.”

--With assistance from Elaine Chen and Lu Wang.