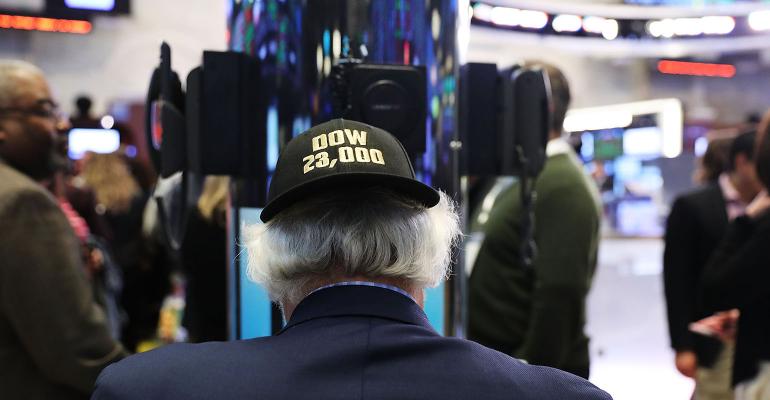 Turns Out It Will Be Congress's Fault When Stocks Crash

Treasury Secretary Steven Mnuchin warns that Congress much pass tax cuts or face a steep correction in the stock market.

By Lu Wang and Sarah Ponczek

(Bloomberg) --Don’t take credit for the stock market, President Donald Trump is often warned, you’ll be blamed when it crashes. Well, maybe that can be avoided, too.

With the help, specifically, of Congress, which Treasury Secretary  Steven Mnuchin warned must pass tax cuts or be saddled with a correction in equities after their 20 percent jump since Election Day. His words came a day after Trump tweeted pictures of the Dow Jones Industrial Average crossing 23,000 for the first time.

Call it cynicism, a reasonable bear case, grandstanding or even genius itself, just don’t call it out of character for an administration whose obsession with share prices seems to swell with every record close and each legislative failure. This $2.5 trillion bull market is rapidly becoming the one bounty it can’t go without mentioning, even for a day.

“That’s politics, people trying to leverage whatever they can,” Tom Anderson, chief investment officer for Boston Private Wealth, which oversees $7.5 billion, said by phone. “Politicians taking credit for good stock market and not wanting to take blame for bad stock market, that’s as old as stocks.”

Indeed, to say presidents never talk about the market is wrong -- Barack Obama famously called stocks “a potentially good deal” six days before they bottomed in 2009, and Ronald Reagan went to the New York Stock Exchange in 1985 to say his tax policies “helped re-energize” equities. Trump takes it further, with constant tweets about the Dow’s ascent that tie his fortunes to market direction to a degree that has no obvious precedent. In an interview on the Politico Money podcast released Wednesday, Mnuchin said equity gains will be wiped out if lawmakers fail to deliver planned tax cuts that will benefit corporate America. “To the extent we get the tax deal done, the stock market will go up higher,” he said. “But there is no question in my mind if we don’t get it done you are going to see a reversal of a significant amount of these gains.”

There’s at least a ring of merit in the warning. Stocks popped when Trump outlined his tax proposals on Sept. 27, part of an eight-day run of gains. More than $2.5 trillion has been added to equity prices since Election Day as the president promised to scrap regulations, rebuild infrastructure and reduce corporate levies. The S&P 500 Index rose about 0.1 percent at Wednesday’s close.

But the extent to which equity appreciation and Trump policy are related has been one of the great debates of 2017, and remains far from decided. That’s because alongside his promises has been an earnings revival about to print its fifth straight quarterly advance, the harmonizing global economic recovery and indications the Federal Reserve remains committed to gradual tightening.

Most Wall Street strategists leave the tax proposal out of models for predicting the level of the S&P 500, viewing both the politics and impact too hard to handicap.

“I have not talked to a single manager in the last two to three weeks that has actually changed their portfolio based on tax cut legislation,” said Tony Dwyer, U.S. portfolio strategist at Canaccord Genuity Inc. whose year-end forecast for the S&P 500 envisions no reduction. “If you’re going to have people selling because we don’t get it, you kind of have to have people buying because they thought they would.”

Said Chris Harvey, head of equity strategy at Wells Fargo: “We’re not of the opinion that if tax cuts don’t get done the world comes to an end, I just don’t see how that works,” adding, “If you get a little bit of negative news can you see the market soften up or see some volatility? Sure, absolutely. But something massive just because there’s a delay or taxes won’t get done? That’s hard for me to believe.”

Nor do most investors say Trump is driving the gains. An October survey of by E*Trade Financial Corp. found that its online traders cite an improving economy and strong earnings as the most important forces behind the latest rally. Only one-third of the respondents named Trump among the top three catalysts.

That stocks would play a role in shaping policy alongside a bond market that has been lulled to sleep by Fed policy was the subject of an essay by Jason Trennert of Strategas Research in August.

“All-time highs in the major stock indices when the country is near full-employment allow both the president and Congress to concern themselves with scoring political points rather than deal seriously with the country’s economic future,” Trennert wrote in the midst of a debate over government funding. “Whether a 5-10 percent correction in stock prices is needed in the interim to get both sides to cooperate is yet to be seen.”

Speaking at the Institute of International Finance meeting in Washington last Sunday, Former Treasury Secretary Larry Summers said there’s a tendency among public officials to say that any policy they don’t like will be damaging to markets, anything they do like is helping them. And Summers -- a frequent Trump critic who worked for his predecessor -- wasn’t ready to give the current president credit for the stock gains.

“Markets do a lot of what they do really quite apart from what’s happening with policy, and I think the way to understand the last 9 months, is heavily that earnings announcements have been for the most part very strong,” Summers said.