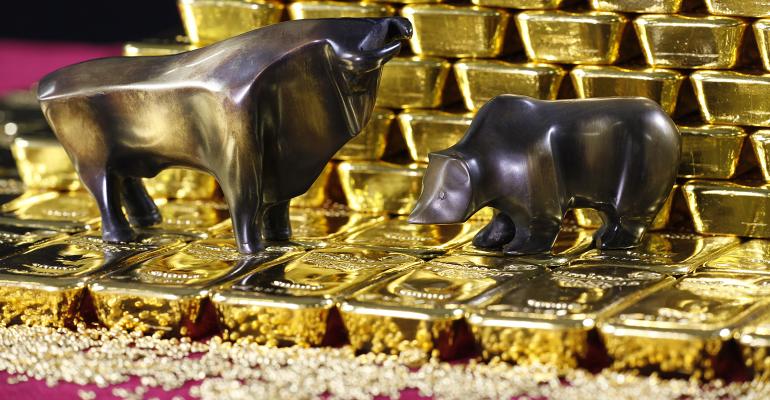 Both stocks and gold are rallying. Market watchers are baffled.

(Bloomberg) -- It used to be understood that if haven assets rise, then the risky ones would fall. Now, with both rallying, investors are having to rethink their playbooks.

The explosive recovery for U.S. stocks stands out against a commensurate rally for gold, which acts as an inflation hedge as well as a safe play. Equities in both the euro area and Britain entered bull markets in recent weeks, even as demand for top-rated government debt pushed German yields further below zero and took the U.K.’s negative for the first time.

And the dollar, the world’s reserve currency of choice, has fallen from an all-time high, according to a Bloomberg index, yet Treasury yields have barely budged in comparison.

It all creates a complex picture at an important time for pricing risk. Market watchers, baffled by the devastating human and economic costs of a virus that swept across the globe, and central banks’ colossal bond-buying programs, have seen their valuation models rendered useless. Key indicators, such as inflation, have become wildcards.

And hot on the heels of the biggest economic shock of modern times from the coronavirus, worsening relations between the U.S. and China are stoking fears of a new cold war, further complicating matters.

For Stephen Gallo, a currencies strategist at the Bank of Montreal, the overall trading pattern implies a use of haven assets as a form of insurance within the return to risk, particularly on global equities.

“The demand for gold and good government debt may be sophisticated investors seeking insurance against a stock rally that, at times, looks like investors climbing a wall of worry,” he said by telephone.

Among the most cited examples of assets that emulate the contradiction is the dollar. Given the risks that led its rise are still unresolved, the currency’s long-term prospects seem intact, with traders favoring the dollar against all but two of its major peers, according to six-month risk reversals.

“The threat of mass unemployment, deep recession and geopolitical tension should keep nerves frayed and the safe haven dollar supported against a broad basket of currencies,” said Jane Foley, the head of currency strategy at Rabobank in a client note, adding that equity-market bulls have paid little attention to devastating news.

Foley is the most accurate Group-of-10 and major currency forecaster, according to data compiled by Bloomberg.

That said, the dollar has drifted lower in May, with some using technical analysis to show that it’s a trend, not a blip. And its biggest nemesis, the euro, has had a good run after the European Commission proposed a plan for a rescue fund.

Bullishness on the euro, which accounts for about a third of the Bloomberg Dollar Spot Index, is the highest since March for one-week and one-month options contracts. The fiscal moves come alongside expectations for the European Central Bank to beef up its pandemic bond-buying program, likely giving the euro another push forward.

Even so, “it all goes back to the dollar,” said Gallo. “Put simply, there aren’t as many other easy, go-get ‘em trades. Instead, you have complexity in the form of easing at emerging market central banks, declining real yields and the prospect of negative interest rates in various jurisdictions.”

To contact the editors responsible for this story:
Dana El Baltaji at [email protected]
William Shaw