U.S. earnings growth will slow to 5 percent to 7 percent in 2019, the Fed may raise rates once or twice more, and the price-earnings ratio of the stock market will start the year at a reasonable point.

Bonds look all right in this environment. Stocks should do better than they did in 2018. The best opportunity should be in emerging market stocks, which have lagged far behind their U.S. counterparts.

“If you add it all up, it’s not a bad story for stocks -- maybe not double-digits, but better,” Timmer said in a Dec. 13 interview.

Watch out for device companies, such as Apple Inc., that are great until they stop being great because they lack product diversity. By contrast, Samsung Electronics Co. isn’t just devices and handsets but also creates other necessities, such as memory chips.

Be a stock picker rather than buying the index. For example, there is groundbreaking work around the world in biotech and pharma companies in the area of cancer therapies and personalized treatments based on body chemistry. Rather than focus on specific companies, we invest in multiple companies in the sector, as one will have an amazing breakthrough and another will have a stage-three drug that fails.

“My base case is decelerating but solid growth globally, with the U.S. decelerating as well. I also expect tepid but positive global stock market returns. However, the ‘tails’ are getting fatter as risks, both positive and negative, increase. For example, a quick resolution of the trade war with China could push global growth higher and also push stock market returns higher -- especially if the Fed become significantly more dovish. Conversely, an escalation of the trade war with China could put downward pressure on global economic growth and likely push stock markets lower as well -- particularly if the Fed is less dovish,” she said in a Dec. 27 email.

Beware of rising volatility, widening credit spreads and a flattening yield curve that are indicating an economic downturn within 12 to 24 months.

Increase cash positions now to await opportunities, such as wider spreads and overshooting to the downside in corporate debt. Potential opportunities are found in U.K. financials, after valuations sank amid fears about a chaotic Brexit, which Pimco believes is a low-probability event.

“We are beginning to see a few select opportunities around credit, but we remain concerned about credit in general,” Ivascyn said in a Dec. 13 Bloomberg Radio interview.

Avoid U.S. stocks and corporate debt, and steer clear of long-term Treasuries as rates are likely to resume rising amid swelling U.S. deficits.

“This is a capital preservation environment,” Gundlach said in a Dec. 17 interview on CNBC. “Unsexy as this sounds, a short-term, high-quality bond portfolio is probably the best way to go as you head into 2019.”

In equities, we like quality: cash flow, sustainable growth and clean balance sheets. The U.S. is a favored region, and we see emerging market equities offering improved compensation for risk. In fixed income, we add U.S. government debt as ballast against late-cycle risk-off events. We prefer short- to medium-term maturities.

In a total portfolio context, steer away from areas with limited upside but hefty downside risk, such as European stocks.

“We see a slowdown in global growth and corporate earnings in 2019 with the U.S. economy entering a late-cycle phase,” he said a Dec. 10 note to clients.

U.S. stocks have had a good run. For the next 10 years, 5 percent to 7 percent annual returns would be reasonable. That is less than the 100-year average, but not terrible.

Emerging market stocks are starting out a lot cheaper and have a higher dividend yield. You could get 8 percent to 10 percent returns over the next 10 years. If the U.S. dollar weakens you could get more as a U.S. investor, he said in a Dec. 5 interview.

Expect an economic slowdown but not a recession in the U.S or globally. U.S. growth will decelerate to about 2 percent. No material acceleration in inflation because we are unlikely to see higher wages pass through into higher core inflation.

Invest in securities that have sustainability in earnings growth and dividends, in sectors such as health care, consumer discretionary and regional banks. Emerging markets have upside given their attractive relative valuations and the prospect of a weaker dollar in the second half of the year.

“Decelerating global economic growth, increased attention to trade-related development -- particularly with China -- tighter monetary policies, reduced liquidity, and a mean reversion toward historically average volatility levels are likely to set the tone for equity markets in 2019,” he said in a Dec. 21 email.

The bond manager is watching “very carefully the slight pulling apart within the European Union with individual countries -- France in particular, and Germany. You have to keep an eye on that. Short-term, you have to because it concerns the European Central Bank. Long-term, you have to watch what is happening to the European Union and if it could weaken to the point of ineffectual. Is there a second referendum in Britain and if so, does ‘Remain’ get 55 percent of the vote? That I think is a first-quarter event.”

“More serious is what happens in the trade negotiations. We’re in a push-for-influence war with China. China’s the emerging power and we’re the established power,” he said in a Dec. 20 interview. 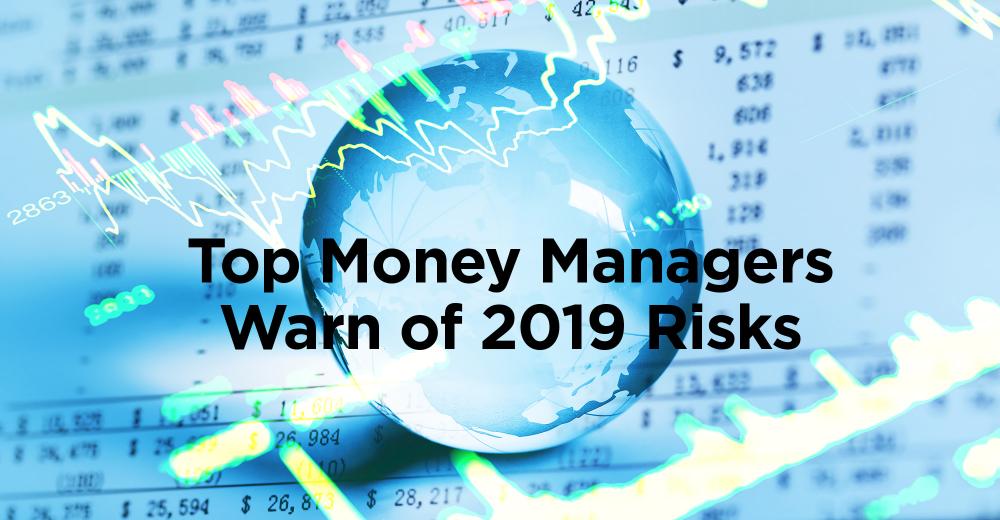