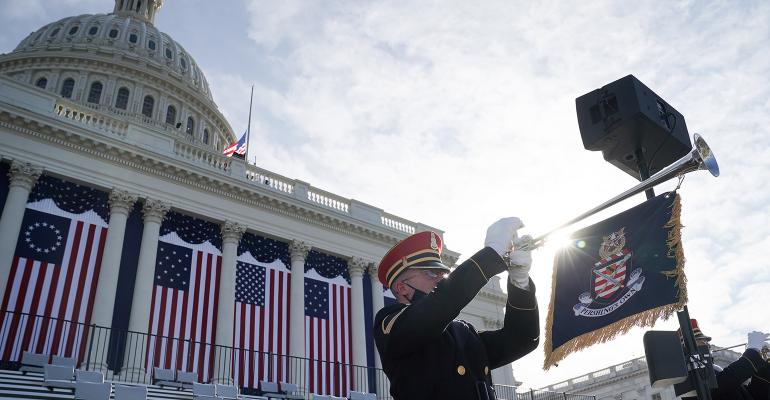 Historically, having one party in charge of the House, Senate and presidency has coincided with a 9.1% annual return for the S&P 500 going back to 1950.

(Bloomberg) -- For all the risks U.S. investors are still facing, the political party of the incoming president isn’t necessarily one of them.

Joe Biden, who will become the 46th U.S. president on Wednesday, will run the White House with his Democratic Party controlling Congress. Historically, such a scenario has coincided with a 9.1% annual return for the S&P 500 going back to 1950, data compiled by LPL Financial show. That’s not as good as the performance during a split government, but still above the average for all years.

For investors, Biden represents an attitude shift from the era of Donald Trump, who famously made the Dow Jones Industrial Average a barometer of his success. For now, they don’t seem too concerned, betting that spending on infrastructure to support the economy will spearhead a recovery in cyclical parts of the market. The transfer of power has been turbulent, but most on Wall Street remain optimistic.

“Generally, the markets are not as impacted as some would think by who’s in charge,” said Chris Gaffney, president of world markets at TIAA Bank. “Certain sectors -- the regulatory environment, tax environment -- there’s certainly things that impact the markets. But in general it’s more about where we are in the economy and where the economy is headed. And right now, it looks like they’re going to do moves to support the recovery.”

More than $7 trillion has been added to equity values since the November vote, driven by optimism over a vaccine rollout, signs of an economic turnaround and confidence the stock market’s recent underdogs -- the cyclical sectors that benefit from a better economy -- will keep driving the S&P 500’s advance. Biden’s coronavirus relief package, with a price tag of $1.9 trillion, will likely boost infrastructure and machinery stocks.

“We favor owning construction-related industries, especially those that will also benefit from a strong residential construction market,” Pat Tschosik, an analyst at Ned Davis Research, said in a recent report.

While infrastructure stocks may have not yet completely priced in the potential upside from Biden’s policies, clean energy stocks, among the biggest beneficiaries of the new president’s agenda, have already soared. Take the Invesco WilderHill Clean Energy exchange-traded fund, which more than tripled in value in 2020, or the Invesco Solar ETF, which gained 234% on optimism over Biden’s green initiatives. Solar stocks and marijuana companies are among those expected to get a further boost.

Somewhat clouding the outlook is Democrats’ plan to raise taxes to help fund increased spending. While greater infrastructure spending could result in higher top- and bottom-line growth for U.S. firms, higher taxes could hinder that. A proposed corporate tax increase to 28% could mean a 10% decline in the S&P’s per-share earnings in 2021, the analysis from LPL Financial shows.

“Whereas companies are having plenty of money to burn, the question for business leaders is what should it be spent on?” Sean Darby, global equity strategist at Jefferies, said in a recent note. “The Democrat victory has made it a little more complicated since the corporate tax rate will certainly increase -- probably from 2022 -- while share buybacks in the midst of the pandemic might be politically difficult.”

There’s no guarantee, though, that a tax hike is imminent, since the recovery is still fragile and many companies are shaky in the aftermath of the pandemic-related slump. A growing number of analysts say Biden will be in no rush to increase corporate taxes.

What’s giving investors optimism is hope that the market’s next move higher will be propelled by a growing number of stocks and not just megacap tech companies, some of the biggest winners during Trump’s administration that may come under greater regulatory scrutiny under Biden. Value stocks, especially the smallest cohort that hasn’t moved much in years, have been among the biggest winners recently.

“The increase in the economy should be good for smaller companies -- they certainly lagged the larger companies over the last four years and they’ve got a lot of catching up to do,” said Barry James, portfolio manager at James Investment Research. “A lot will depend on the policies that are passed and whether they are pro-growth or anti-growth and how much it will push business here overseas.”