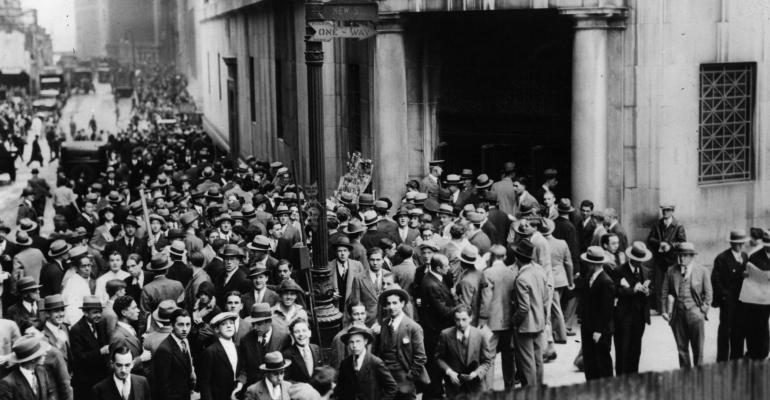 Taking a look at four measures of market value, all at historically high levels

“In the short run, the market is a voting machine but in the long run, it is a weighing machine.” – Benjamin Graham

Believing as I do in the sage advice of Mr. Graham, I recently set out to quantify my growing unease with the heights obtained by the bull market of the last five-plus years. As you read below, please realize that this is not a forecast or prognostication about what will happen – especially not in the short term. Timing the market on any sort of a short-term basis is a fool’s errand, as is deviating from your specific financial plan on the advice of a stranger.

Consider this more of a “Where are we at?” with respect to market valuations, secure in the knowledge that times of sensational highs and lows tend to be fleeting and that the market has a tendency to mean-revert (that is, become a weighing machine) in the long term. Having now sufficiently hemmed and hawed my way through the legal stuff – let me say that I find the market significantly overvalued and think that some sort of defensive measures will be wise for most investors in the year(s) to come.

To corroborate this belief, I’d like to present you with four measures of market value, all at historically high levels. They are:

What it is – The work of Nobel Prize winning behavioral economist Robert Shiller, the CAPE is the price/earnings ratio based on average, inflation-adjusted earnings for the previous ten years.

What it means – The CAPE is a poor predictor of short-term market movements (most everything is), but is much more reliable in speaking to the long term return horizon. Using Shiller’s own expected return formula (taken from value investing site GuruFocus), yields an expected return over the next 8 years of .3%. What is much more informative than a single prediction, however, is considering the range of possible distributions for the longer term, which are as follows:

It is certainly worth noting that even the “Really Lucky” scenario that might play out over the next 8 years vastly underperforms the market average.

What it is – A simple measure of the price paid for every dollar of earnings among some of the best capitalized and most liquid US securities.

What it means – As with the Shiller CAPE, greatly elevated levels of price to earnings have signaled a much lower return environment in the years to come. Ned Davis research has done the math on times when the market has been over or under valued relative to fundamentals and has discovered the following:

According to Ned Davis and company, we are now well over 30% overvalued, comfortably above the threshold for the paltry “Overvalued” returns you see above.

What it is – A sort of price to sales marker for the broader economy, once mentioned by Buffett as his favorite measure of market valuation.

What it says – The current market cap/GDP ratio sits at 127.3%, which is more than two standard deviations from the mean value of 68.8%.

What it means – Given historical returns from this significantly elevated level of market cap to GDP, the predicted return for ’15 is .7%, which includes dividends. Drawing on Buffett’s comments, GuruFocus considers a 75 to 90% ratio fair value, with 90 to 115% modestly overvalued and anything over 115% significantly overvalued. The only other time since 1950 that this indicator has broken past two standard deviations of overvaluation is, you guessed it, in the run up to the 2000 crash.

What it is – A measure of market sentiment that is comprised of sub-measures of volatility, valuation, fund flows, momentum and interest rate spreads.

What it says – The CII has spent all of 2014 at a level of elevated optimism just short of mania. While valuations have driven the score up, it has not reached “manic” levels, largely as a result of this having been “the most hated bull run in history.”

What it means – The CII provides one and three year projections based on the current levels of market sentiment. These projections should be understood less as specific predictions and more as headwinds or tailwinds to growth. The current projections are for slightly negative (-1.001) returns this year that persist even three years down the road (-2.6266).

As with any measure, those listed above are subject to a number of failings. The CAPE includes data from the Great Recession that skew the results, a number of the measures fail to account for the interest rate environment, and so on. While no single measure is flawless, when so many measures point in the same direction, I believe it is worth taking note.

This information in and of itself is meaningless but should take on meaning as you discuss your individual needs with your advisor (you DO have an advisor, right?). For very long-term investors, even profound hiccups in the market may be little more than a contrarian buying opportunity. After all, there are more fun and important things to do in life than obsess over financial footnotes.

But for those nearing retirement, an unambiguous picture seems to be emerging that returns for the next 8 to 10 years are likely to be depressed in light of the eye-popping returns of the more recent past.  Do not act in haste or deviate from your plan if one is in place, but please accept this gentle warning from a concerned party who knows that “this time is never different.”

Dr. Daniel Crosby is a NYT bestselling author and behavioral finance professional. Daniel can be reached on Twitter @incblot or on LinkedIn at https://www.linkedin.com/in/danielcrosby.