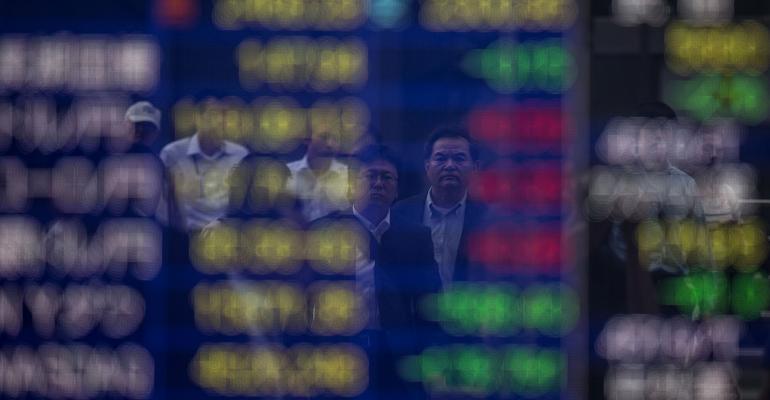 By Chikafumi Hodo and Shigeki Nozawa

“We are overweighting equities although we are not ignorant of the risks of euphoria,” Lacaille said. “When we look at the combination of relatively low interest rates and improving earnings growth, that’s a combination that leads us to conclude that we should be risk on.” Japan’s snap election may support sentiment in the stock market, though it’s unlikely to generate much excitement, Lacaille said.

Japanese Prime Minister Shinzo Abe told his coalition partner he will dissolve the lower house of parliament on Sept. 28 for a general election. So-called Abenomics has helped spur six consecutive quarters of economic growth -- the longest expansion in a decade.

If Abe’s Liberal Democratic Party fails to win a simple majority of 232 seats, his ability to push through policies will be weakened, according to a note dated Sept. 25 by UBS Group analysts led by Daiju Aoki.

The Topix index of Japanese stocks has risen 25 percent over the past 12 months, outperforming the MSCI World Index, which has climbed 16 percent.

While the yen is near a two-month low against the dollar, it is likely to appreciate toward 90 over the next year, according to Lacaille.

The yen is currently undervalued because of so-called carry trades, in which investors borrow the currency at low interest rates and sell it for higher-yielding ones, he said. The dollar may weaken as U.S. President Donald Trump struggles to pass his economic policy agenda through Congress, Lacaille said.

The greenback may weaken against the euro even though the European Central Bank is expected to keep interest rates low amid Brexit and concerns over Italy’s banking system, Lacaille said.

Europe’s single currency may strengthen toward $1.25 in the long run, depending on Trump’s economic policies, according to Lacaille. The euro extended gains in July after the European Central Bank led by President Mario Draghi considered removing a pledge to increase debt purchases. The currency was at $1.1818 on Tuesday.

“It might continue to strengthen,” Lacaille said. “I think you’ve got capital flows being restarted among global investors.”