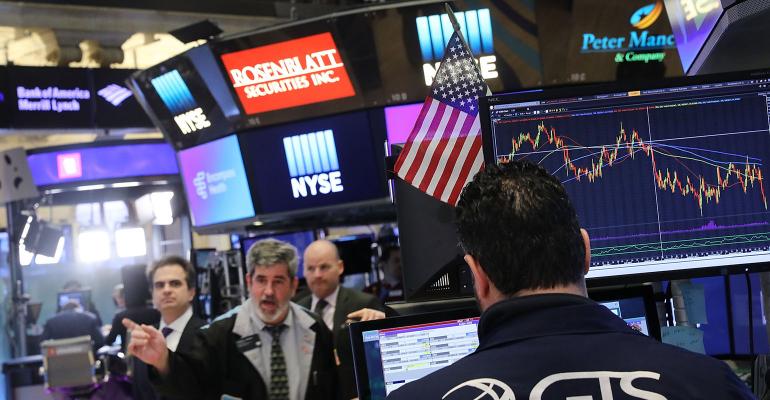 Retail investors are often painted as the unsophisticated “dumb money,” buying high and selling low. And much of the argument against automated advice platforms known as robo advisors has been that investors would pull the trigger on their investments at exactly the wrong time during market crashes and so they need human advisors to prevent them from running for the hills and keep them invested. But recent data from last week’s stock market corrections shows that view may be misguided.

“What we saw in the data across the robo and the self-directed space—again, predominantly millennials—is that they actually bought into the dip,” said William Capuzzi, CEO of Apex. “They saw an opportunity. They got plenty of information from their providers that told them, ‘Don’t panic,’ and ‘This is opportunities for you to buy.’”

But things changed slightly following the Thursday dip in the markets, when Apex saw a relatively minor 32 percent decrease in net buying in the robo space, but a 111 percent increase in selling in the self-directed space, which Capuzzi said was largely due to stop-loss orders triggered after certain thresholds were breached.

“They weathered the first shockwave, and into that second, we saw a pretty dramatic increase in selling—but only in the self-directed space,” Capuzzi said.

While robo advisor Betterment saw a spike in users logging into their accounts last week, a spokesperson said the investment platform saw four times the number of customers making a deposit versus a withdrawal, something the company attributes to keeping its customers focused on the long term.

“For years we’ve continually heard the narrative that companies like Betterment haven’t gone through periods of volatility,” said Joe Ziemer, spokesman for Betterment.

Personal Capital said there was an increase in the dollar amount of contribution requests by 8 percent on Feb. 2 and  21 percent on Feb. 5, versus the previous three-month daily average.

“Some clients were being opportunistic (buying the dip) while others may have chosen to allocate more funds to their core strategy with Personal Capital from other more speculative accounts,” said Craig Birk, executive vice president of portfolio management at Personal Capital.

The company also saw a decrease in the dollar amount of withdrawal requests by 75 percent on Feb. 2 and 58 percent on Feb. 5 versus the previous three-month daily average.

“This market event has proven the importance of sticking with a personalized financial plan, even when it is emotionally trying,” Birk said.

Personal Capital sent out a market update email to clients on Monday. The company also sends out a market digest every Friday to inform customers of market activity during the given week and sent it directly to customers’ email inboxes last week.

While Betterment didn’t email clients during or after last week’s correction, it did send an in-app message to everyone who logged into their account, directing them to an article about what to do during market volatility.

Another robo platform, Stash, hosted a live blog on Twitter and Facebook at the end of every day last week to talk about what happened in the markets and take live questions from viewers.

“All of the electronic providers created channels to their consumers to connect through this turmoil,” Capuzzi said. “I look at how the information came to me via some of these providers around what’s happening in the market versus my traditional advisor, who doesn’t have those electronic means to connect to me and only has X number of hours in the day to connect to his clients. And I’m fine with it, but he didn’t connect to me.”

According to TD Ameritrade, its Essential Portfolios and Selective Portfolios digital advice platforms saw a 10 percent increase in net flows so far in February compared to this time last year. The platforms had two to three times the typical amount of client logins last week. Schwab said it did see an increase in the number of robo clients calling in, but few robo clients made any significant changes to their investments.

Wealthfront, M1 Finance and WiseBanyan did not respond to requests for comment.