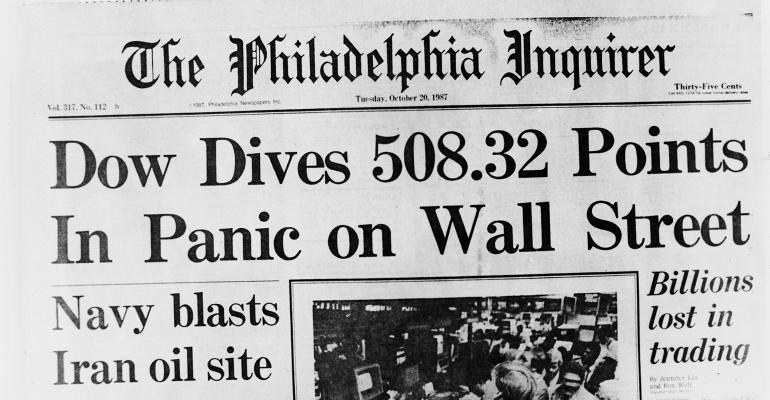 The 1987 market crash taught investors that the Fed would come to the rescue after a market crisis, argues the chief economist of Aberdeen Standard Investments. That lesson came back to haunt us in 2008, and may yet again.

On October 19, 1987, a crash that began in Hong Kong rippled through European markets and then to the United States. Hong Kong stocks fell by 11 percent, at which point the market closed for the rest of the week to settle investors’ nerves. That didn’t work. When it reopened the following Monday, shares fell by a further 33 percent. In the UK, the FTSE 100 benchmark index fell by nearly 11 percent on October 19 and a further 12 percent the following day, while other European stock markets experienced similar sharp declines. The U.S. market’s fall of 23 percent was the Dow Jones Industrial Average’s  largest-ever, one-day drop. It was twice the size of any daily fall during the 1929 market crash, and far outstripped declines experienced during the 2008 global financial crisis.

Black Monday was also the first contemporary global financial crisis, driven by panic across the world’s stock exchanges. It brought into sharp relief just how intertwined the world’s markets were becoming, at a time when “globalization” was a far less familiar concept than it is today. The 1987 crash was also the first to encompass the widespread use of financial derivatives; the first to involve pension funds and giant institutional investors and relative newcomers to equity markets at the time; and the first to be amplified by a growing reliance on computers.

Little wonder, perhaps, that the events of Black Monday raised fears of a repeat of the 1929 stock market crash and the economic depression that followed. But both of these fears proved unfounded. Stock markets quickly regained their poise. In two further trading sessions, U.S. markets clawed back over half of their Black Monday losses. In the UK, the FTSE 100 index still ended the year higher than it had begun. As for the world economy, it expanded by a respectable 3.5 percent in 1987, rising to 4.2 percent in 1988. The U.S. grew at a similar pace, neatly avoiding recession until the dotcom boom ended in bust in the early 1990s.

Even 30 years on, the precise causes of Black Monday are disputed. Factors such as globalization, computerization and increasing complexity of financial instruments all played a part. Structural flaws in markets were also to blame. “Circuit breakers,” for example, allowing exchanges temporarily to halt trading in the face of large-volume selling and sharp market declines, were only introduced after the salutary experience of Black Monday. Idiosyncratic factors were in the mix too. In the UK, for example, a severe storm on the preceding Friday prevented many traders from getting to work. Having spent the weekend fretting about their open trading positions following falls on Wall Street, they were all too eager to sell when markets reopened on October 19.

But if the factors behind the global market sell-off are subject to debate, the trigger for the subsequent recovery seems clear. On October 20, then U.S. Federal Reserve Chairman Alan Greenspan affirmed the Fed’s “readiness to serve as a source of liquidity to support the economic and financial system.” Behind the scenes, the Fed also encouraged banks to continue lending on pre-crash terms, preventing a liquidity squeeze and helping to shore up economic and investor confidence. The Fed’s response to Black Monday therefore set a precedent for the use of liquidity to stem financial crises over the ensuing decades.

So what lessons have we learned from Black Monday? We know that asset markets are potentially vulnerable to sharp corrections when—as at present—valuations appear stretched. But Black Monday taught us that such corrections can occur without a clear “trigger event.” In addition, the events of 30 years ago suggest that markets can be particularly vulnerable when—as now—there is transition at the top. Before Black Monday, investors were uncertain about the new Fed Chair’s policy preferences. Afterwards, they took the view that the Fed and Former Chair Greenspan would pretty much always come to their rescue. Finally, Black Monday demonstrated that policy intervention can succeed in preventing a stock market crash from becoming an economic one. But to the extent that the Fed’s actions fostered complacency and carelessness in risk assessment, the success in limiting the impact of Black Monday arguably came at the later cost of the 2008 financial crisis.

Lucy O’Carroll is the Chief Economist at Aberdeen Standard Investments.