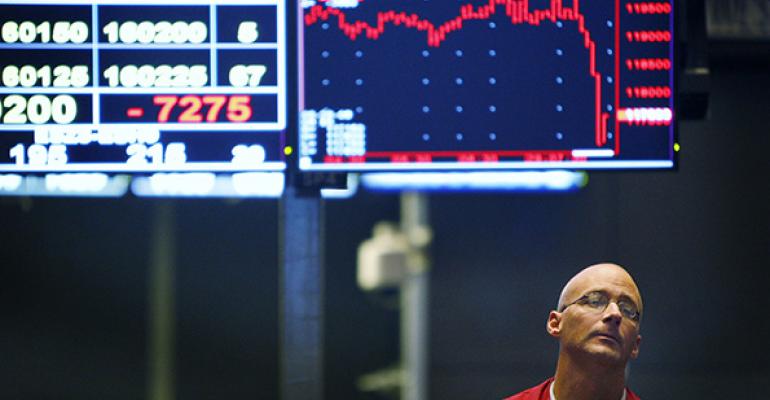 Shorting volatility has gotten so crowded that it's not going to end well when everyone starts to sell.

(Bloomberg) --The most profitable short trade in town has been a gift that keeps giving. To be precise, it’s had an eye-popping surge of more than 4,000 percent since the start of the bull run in 2009. That allure has been enticing investors to jump on the gravy train.

That gift -- selling volatility -- is so crowded now that when everyone reaches for the exit, it’s bound not to end well.

Part of the charm of being short volatility is explained by the term structure of the curve, which is upward-sloping, or said to be in contango. That means the so-called roll return for someone being long is negative. For instance, an investor who is long on August VIX futures faces the prospect of losses as the contract rolls down the curve four points to converge with spot VIX at expiry, assuming no change in volatility levels. That scenario is one factor why short-volatility strategies have proved to be so popular.

In fact, the S&P 500 VIX Short-Term Futures Inverse Daily Index, which tracks the return of being short a one-month VIX futures contract, is up 40-fold since March 2009, which is an annualized return of about 60 percent. Focusing purely on the absolute level of the VIX leads to false narratives and loses sight of the fact that the index reflects the market’s expectations for the S&P 500’s realized volatility over the next 30 days. Contrary to popular belief, a low VIX doesn’t signal an imminent market decline and mirrors what is happening to realized volatility. The spread over actual realized volatility provides an insight into how complacent the market really is.

In the meanwhile, short-dated SPX call skews have flattened, which provides underexposed investors a low-carry entry point amid depressed volatility. The three-month skew is at the lowest since 2014, providing exposure to the global upswing in PMIs that may keep the buy-the-dip mentality intact until the end of summer. First-quarter earnings of U.S. companies outstripped forecasts, and the stock market is for the moment giving the U.S. administration some time on fiscal expansion given that legislation is a slow process. A re-kindling of volatility is likely from, beside random events, a failure of the economy to confirm recent optimism or a resurgence in inflation that prompts the Federal Reserve to be more aggressive. Overlaying the VIX on the macro variables of ISM manufacturing and consumer confidence highlights how the index is a function of the business cycle given its explanatory power for modeling volatility. Short-volatility strategies have performed well since 2009, just as black-swan funds were pitching end-of-the-world portfolio protection. The mindset of short-volatility sellers is characterized by expectations of preemptive central bank action to any crisis, making the trade a structural strategy as global rates hover near the lowest in human civilization.

A regime shift in volatility will be best captured with long-convexity exposure combined with tactical shorts rather than tail-risk strategies betting on mean-reverting volatility spikes. CBOE Eurekahedge benchmark indexes, which measure the performance of hedge funds employing volatility-based investment strategies, highlight the outperformance of short volatility and relative-value strategies while tail risk has underperformed. Investors who are short volatility will find that the risk-reward balance is diminishing, and an eventual post-summer dash for the exits may not be a walk in the park.

* NOTE: Tanvir Sandhu is an interest-rate and derivatives strategist who writes for Bloomberg. The observations he makes are his own and are not intended as investment advice.