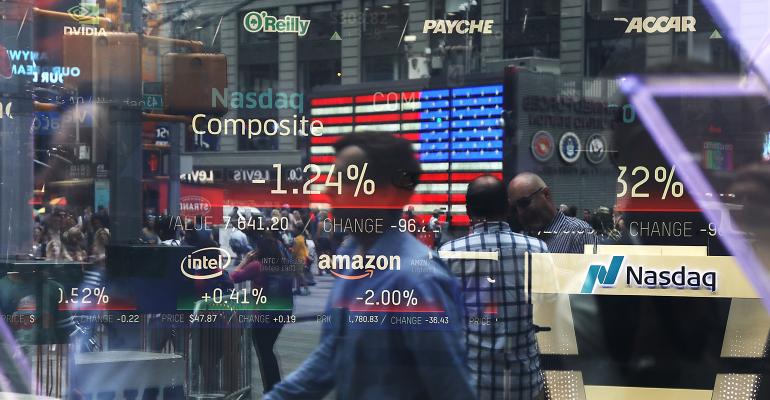 Money Managers Are Punished by a Runaway S&P 500

Diversified portfolios can’t keep up with a market supercharged by a few tech stocks.

The S&P 500 Index has reclaimed its pre-coronavirus peak and is notching fresh records almost daily, yet few managers are celebrating. Sure, the money they oversee is growing, but not fast enough for investors aching to keep up with a runaway U.S. stock market.

The market rally, and the fear of missing out it arouses, is disrupting the delicate balance managers must strike between protecting money and growing it. Managers safeguard the money entrusted to them by spreading their bets. But when the U.S. stock market surges, it tends to be the only bet investors care about. And that’s when diversification can quickly take a backseat to chasing the market.

Building guardrails around a portfolio isn’t free, but the cost has historically been bearable. A traditional diversified portfolio made up of 60%  U.S. stocks and 40% long-term bonds blended equally between government and corporate debt has generated 9% a year since 1926, including dividends. That’s 1.2 percentage points a year less than the S&P 500, but with roughly a third less volatility, a common measure of risk.

The explosion in new investments in recent decades promised to further reduce the cost of protection. Money managers can now assemble portfolios in a dizzying number of combinations by reaching for foreign stocks and bonds, hedge funds or private assets— and all in a variety of investing styles. And most have. Today’s portfolios are far more diversified than a traditional 60/40 one, which in theory should produce similar or higher returns with less risk.

But just the opposite has happened in recent years. The U.S. stock market has outpaced most other investments, so the more managers diversified their portfolios, the more they lagged the market. A 60/40 portfolio of global stocks and bonds has returned a respectable 8.4% annually over the past five years, but also a heartbreaking 6.2 percentage points a year less than the S&P 500. And that’s probably the best case. Those who also dabbled in value stocks, small companies, hedge funds or energy-related real assets fared even worse.

What happened? The fault is in the stocks. A handful of them have performed spectacularly in recent years while the rest have stalled or worse. There are roughly 9,000 companies in indexes that track the broad global stock market, but just 30 of them produced more than 70% of the total gain over the past five years, more than half of them U.S. companies. Ten stocks — Amazon.com Inc., Apple Inc., Microsoft Corp., Nvidia Corp. and Advanced Micro Devices Inc. in the U.S.; Alibaba Group, Tencent Holdings Ltd. and Kweichow Moutai Co. in China; Shopify Inc. in Canada; and Magazine Luiza SA in Brazil — were responsible for more than 50% of the gain. And amazingly, just three — Amazon, Apple and Microsoft — contributed 25% of the gain.

Crises tend to level the playing field, but Covid-19 has only widened the disparity between the handful of winners and the horde of laggards. The e-commerce and internet giants have thrived during the pandemic while many other businesses languished, which has further ballooned their market value relative to the field and thereby increased their representation in broad market indexes. Apple, Microsoft and Amazon, the three biggest stocks in the S&P 500 by market value, now account for a whopping 18% of the index. While they continue to soar, good luck keeping up with the market without a sizable stake in those stocks.

Stock funds have paid a harsh penalty for lightening up on the behemoths or sidestepping them altogether. That includes hedge funds, actively managed mutual funds and index funds that stray from the broad market. The HFRI Equity Hedge Total Index — an index of long-short equity hedge funds — has trailed the S&P 500 by 7.5 percentage points a year over the last five years through July, well below its average outperformance of 0.4 percentage points a year relative to the S&P 500 over rolling five-year periods since 1990. And of the roughly 10,000 equity and alternative U.S. mutual funds with a five-year track record, just 17% beat the S&P 500 over the past five years, according to numbers compiled by Morningstar. Not all those mutual funds invest in U.S. stocks, but the results show how difficult it has been to keep up with the U.S. stock market regardless of the strategy.

Managers of diversified portfolios fared no better, mainly because stocks or stock funds account for a substantial portion, if not most, of their portfolios. Of the roughly 3,700 balanced U.S. mutual funds with a five-year record, just two managed to beat the S&P 500 over the last five years. And as a group, they lagged the S&P 500 by an average of 7.2 percentage points a year during the period, well higher than the toll historically paid by traditional 60/40 portfolios for straying from the S&P 500.

Even the most sophisticated managers of diversified portfolios have struggled to keep up. Of the 38 university endowments tracked by Bloomberg that have reported performance through fiscal year 2019, all of which oversee a bounty of more than $1 billion, not one beat the S&P 500 over the previous five years — not even the mighty Harvard and Yale endowments, despite the talent and resources their collective $71 billion affords them. They trailed the S&P 500 by 5.1 percentage points and 1.9 percentage points a year, respectively.

Many diversified portfolios would have suffered even more if not for the success of bonds and private equity. Long-term government and corporate bonds each returned more than 10% a year during the past five years, nearly twice their long-term average, as interest rates fell to near zero. And while private equity delivered more muted returns than investors are used to, it still outpaced the S&P 500 by 2.5 percentage points a year over five years through March 2020, according to the Cambridge Associates U.S. Private Equity Index. But those tailwinds are likely to vanish in the years ahead. Interest rates have little room to fall further and private equity is awash with money chasing too few deals, which is stretching valuations and compromising future returns.

All of this leaves managers with a discomfiting choice: stick with a balanced portfolio or chase the S&P 500. The last time they faced such a quandary was during the dot-com boom of the late 1990s. Those who stuck with their diversified portfolios lost clients who were desperate to keep up with the market. And those who chased the market lost clients, and much of their money, when internet stocks tumbled in the early 2000s, dragging the market down with them. Managers don’t often face such a choice. Unfortunately for everyone, this is such a time.