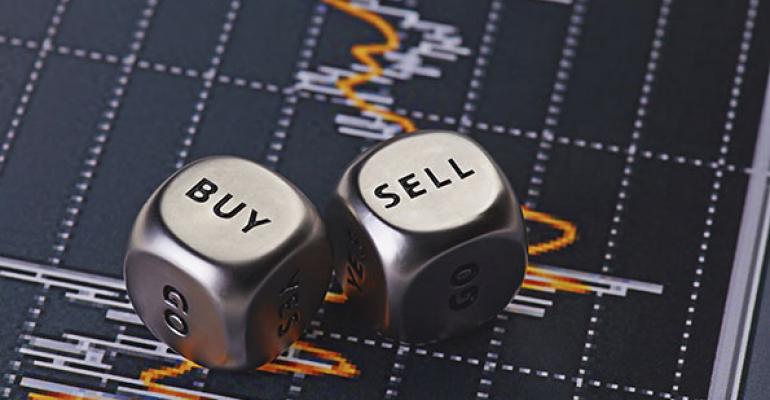 Stocks and bonds are rallying in tandem at a time when their hedging power against one another is the strongest in almost a year.

(Bloomberg) --For every buyer, there’s a seller; for every winner, a loser.

At least, that’s how it usually goes. Yet that hasn’t borne out in the U.S. stock and bond markets. The S&P 500 index is near a record high after gaining about 14 percent since the end of October. Meanwhile global bonds have rallied for five straight months, the longest stretch to start a year since 2003. The benchmark 10-year Treasury yield, at 2.20 percent, is close to its 2017 low. One of those investor groups has to lose, in the eyes of Bank of America Corp. rates strategist Shyam Rajan. He forecasts the U.S. Treasury will be under-financed by as much as $4.5 trillion over the next five years and have to issue more debt. To find enough demand, interest rates would have to climb 120 basis points from current levels, or equity prices would have to plunge 30 percent, he said this week in a report.

The sharp move in rates may play out in the years ahead, for reasons Rajan lists: price-insensitive bond buyers like the Federal Reserve are leaving the market, foreign investors may step back as their own central banks tighten policy, and pensions can’t justify buying Treasuries unless yields are higher.

In the meantime, stocks and bonds are rallying in tandem at a time when their hedging power against one another is the strongest in almost a year. Peter Tchir, head of macro strategy at Brean Capital LLC, sees risk parity strategies at play, snapping up Treasuries as a safeguard against holding equities at record-high prices.

It’s not just them: in the week through May 24, investors added about $6 billion to bond mutual funds, extending a streak of inflows that begun the first week of 2017. At the same time, they’ve yanked money out of domestic stock funds in 12 of the past 13 weeks, Investment Company Institute data show. “People have been saying rates are going to rise for multiple years now, and we haven’t seen it -- the reality is bonds provide a valuable diversifying source for portfolios and we tell our investors to stay the course,” said Greg Davis, global head of fixed income at Vanguard Group Inc., which oversees about $4 trillion. “Even in a lower-yielding environment, the diversification premises of holding bonds still holds true.”

The correlation between the S&P 500 and the Bloomberg Barclays U.S. Treasury Index in the past 30 days is -0.67, the lowest since July 2016, data compiled by Bloomberg show. A more negative reading signals prices are likely to move in the opposite direction of one another, providing a stronger hedge. As recently as mid-April, the figure was positive.

The best example of this hedging strength at work was May 17, when the S&P 500 plunged 1.8 percent, its biggest drop since September. Treasuries, by contrast, rallied the most since July 2016.

The fact that both markets are rallying even with this offsetting dynamic at work suggests that investors are buying both sides as a way to offset their exposure to losses -- like those described by Bank of America’s Rajan -- according to Tchir at Brean Capital.

“Risk parity is a crowded trade and growing more crowded by the day,” Tchir wrote in a note on Tuesday. “It isn’t just direct fund flows but allocators and investors playing the ‘home’ version of long bonds and long stocks.”

For now, that trade is paying off, not just thanks to fund flows but also because of trends in economic data and company earnings.

The bond market, which went all-in on the reflation trade after Donald Trump’s election, is growing more skeptical about the sustainability of higher inflation. Breakeven rates are near the lowest since November and Fed officials including Lael Brainard said this week that weaker price growth could cause her to reassess the path forward for higher interest rates.

Meanwhile, with the earnings season drawing to a close, 78 percent of S&P 500 members have exceeded profit forecasts and 63 percent have beaten sales expectations, data compiled by Bloomberg show.

“The two markets are on different paths, mostly for reasons related to the strength of current fundamentals in equities rather than confidence in faster global economic growth,” Jim Vogel, a strategist at FTN Financial Capital Markets, wrote in a note Wednesday. “Corporate earnings do not depend on government fiscal stimulus. Low rates are more important.”