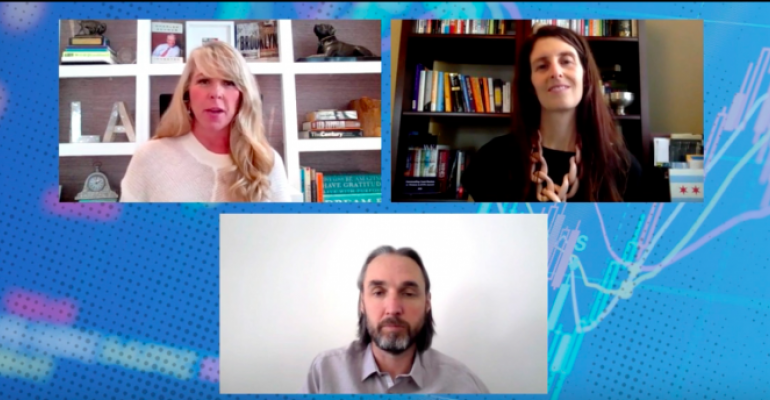 The Market Is Expensive, But Not “Dot-Com” Expensive

With the stock market hitting record highs and President Joe Biden proposing trillions of dollars additional stimulus, market experts told a gathering of advisors this week that yes, the market is expensive, but not yet at “dot-com-bubble” levels of exuberance, value stocks are due for a resurgence, and thematic ETFs could be the way to navigate the economic waters of the Biden administration.

Small-cap barometer, the Russell 2000 Index, is even more expensive with a cash flow yield of 1.1%.

Greenblatt said that points to negative expected returns. Even with trailing data skewed by the COVID-19 crisis, stocks have still been cheaper 90% of the time.

Yet relative to risk-free rate, stocks are maybe not as pricy as that calculation suggests. "Rates are historically low, and if you were to make the assumption that they'll stay low, then you can get better results and stocks aren't quite as expensive as our numbers show," said Greenblatt. "But, historically, you would have to say things are expensive."

As if teaching one of his classes at Columbia Business School, Greenblatt said, he thinks value stocks are the place to invest.

While value has comeback since November 2020, it's still posting historical underperformance over the last one, three and five years. While today's numbers suggest similar conditions to the five years before the Dotcom Bubble's peak, Greenblatt said this market is not identical to that one. Even though many stocks are overvalued, valuations on the leading tech stocks are reasonable.

His value strategy can be seen in the Gotham Large Value Fund (GVALX), which is up 15.8% year to date, beating the S&P 500 by three percentage points, according to Morningstar, and the Gotham Enhanced 500 ETF (GSPY), up 13.1%.

On the president's proposed taxes, including an increase in capital gains taxes for certain investors, he predicted they would change the way people invest and will have a devastating effect on the economy long term, especially in high-tax states.

"For taxable accounts, ETFs will be one of the only games in town," he said, as those funds don’t often distribute capital gains to investors, unlike mutual funds.

The market's main tail risks are short-lived weak growth or overly hot growth that would bring the Federal Reserve in sooner and more aggressively than expected.

Sonders said the broad market isn't in a bubble, but there are “micro bubbles” in speculative parts of the market such as SPACs (special purpose acquisition companies) and the non-profitable parts of the technology sector.

While the froth and narrative of the current environment is "eerily similar" to the dot-com bubble, the big difference is that when the S&P 500's forward Price/Earnings ratio jumped to 27 during 2000 it was because share prices were rising faster than earnings.

Fast forward to end of last year, when the S&P's P/E ratio spiked to 27.

Sonders said it was because of the pandemic's earnings compression, which was like a depression. Now earnings are in an upswing with important underlying differentials. Since the calendar changed from 2020 to 2021, the improving earnings picture has quickly lowered the P/E to 22.

"It's by no means cheap, and I don't know if I'm a buyer at this point of the 'Roaring 20s' scenario," said Sonders. "Are we really going to see pent-up demand on the goods side, that hasn't been met already?"

As for bond yields, Jeffrey Sherman, deputy chief investment officer at DoubleLine Capital, said, "We are cautious about the next leg up in rates. I think we see a 2% 10-year Treasury yield within the next four months and we push a little higher from there."

He said the catalyst for the next move up in rates would be when Europe starts to open as more people get vaccinated. He said inflationary pressures, such as pent-up demand and more stimulus spending, are temporary, but needs to see if the dynamics change in core inflation over the next four months.

Are Thematic ETFs the Answer?

Over the course of the pandemic, retail investors not only flocked to stocks, but capitalized on the situation by buying ETFs that focused on small themes in the economy, such as cannabis or technology for working from home.

At the end of 2019, there were 121 thematic ETFs with just $28 billion in assets under management. By the end of March, the number of thematic ETFs had jumped by a third to 161. Their assets had grown almost five-fold to $131 billion, according to ETF firm Global X.

An ETF can be called "thematic" if it identifies powerful macro-level (often structurally-destructive) trends, and the companies that stand to benefit.

The traditional ways of accessing the market through sector funds didn't give investors the exposure they wanted, said Jay Jacobs, head of research & strategy at Global X ETFs. With the pandemic's disruption of the economy, investors want more narrowly-targeted investments that gain exposure to industries capitalizing on structure changes in the economy.

Jan van Eck, chief executive officer of ETF firm Van Eck Associates said three things make a good thematic ETF: 1) being a pure play, in which fund constituents get more than half their revenue from the theme; 2) funds that follow trends that will last at least five years, not fads that expire after a year; and 3) companies that aren't in the S&P 500.

One example is the Van Eck Vectors Morningstar Wide Moat ETF (MOAT), which is up 17%, according to Morningstar.

Overlap with traditional sector funds can be a problem for thematic investors, said Rich Powers, head of ETF development at Vanguard.

Powers said for many investors, the extra time, due diligence and cost required to successfully pick thematic funds doesn’t necessarily pay off with higher returns versus a traditional index approach. Investors have to be prepared for the volatility of a thematic approach.

Jacobs said his three criteria for a successful thematic ETF are: A belief this theme will disrupt the global economy; the theme has to be investable, in terms of the depth of the market; and time horizon—will this play out over a decade or be a flash in pan?

Jacobs said not all themes are a collection of growth stocks in the technology sector and that there are thematic investments that align with value stocks.